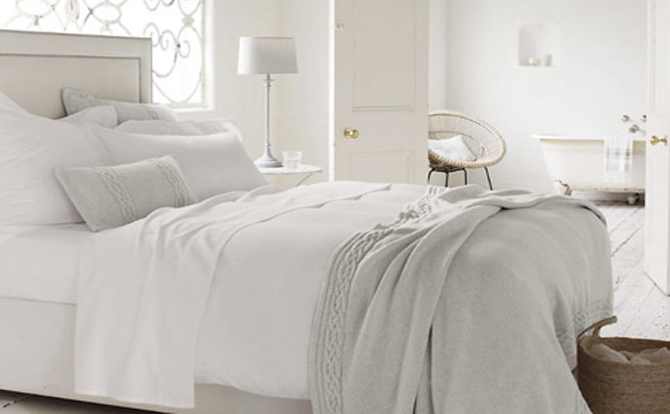 Continuing our mini theme of finding the best bedlinen out there, I got the chance last week to interview the fabulously knowledgable Vanessa Hurley-Perera, The White Company’s bedlinen buyer and all round fabric geek. She demonstrated a nerdy OCD-ness about her subject that I found immensely reassuring, she even likes stationery (she mentioned she had a ‘travelling pencil case’, which of course made me love her more) and I leant SO MUCH about bedlinen in our hour together that I’m going to post twice on the subject.

Today we’ll talk about what the new quality test for a good bedlinen is -and it’s not thread count -as well as other bedlinen-y things and then next week we’ll reveal Vanessa’s tips for laundering and storing your bedlinen, where she gets a chance to really shine as a bedlinen nerd. So Vanessa, can we forget about thread count when we talk about cotton bedlinen then?

“A few years ago thread count was something for customers to latch on to for quality, the higher the threads per square inch, the better the quality -supposedly. You CAN ram lots of threads in to get a high count (and plenty of our competitors do) but if you’re not using a high quality thread to start off with, that fabric just becomes thick and stiff. What we really need to look at now is the quality of the yarn used, it’s a bit like tights- you don’t buy 60 denier if you want a beautiful fine finish, so yes, thread count is still an indicator, but really you should pay attention to the quality of the thread used because this really influences the feel of the fabric.

For example, take our Savoy range, it’s our 400 thread count linen and an incredibly lovely fabric. With our higher (400) thread count linen we use a finer quality yarn called ’80s’, where most of our competitors still use the thicker ’40s’ or ’60s’ yarn. The finer yarn makes a much smoother, lighter fabric with a cooler handle which flows and drapes over your body. The Savoy range is our star pupil, made for us in Italy by a factory that’s highly skilled and I swear to God there’s something special in the water it all gets washed in because it all feels marvellous. And if we want something ridiculously top-end quality?

You move up to the Pimlico which is 720 thread count  which uses the super-fine 140 yarn and is very technical to weave, quite complex and difficult. When you make the bed using Pimlico and you flap the sheets -this is going to sound SO nerdy -but it makes the most amazing whippy noise, it’s how the fine fibres sound when they are so compactly woven, it makes a really lovely snap when you lay it on the bed. I appreciate I’m sounding quite OCD here….

There’s an old chap in the Portuguese factory (one of the only ones in the world that can handle the fine yarn) where we get the Pimlico made who is such an expert that when he looks at fabric through a double layer magnifying glass, which he flips open to check thread counts, he’s done the job for so long he can tell just by looking what the count is, he’s slightly terrifying. He gave me a double magnifying glass as a present and now I frighten all the factories with it. 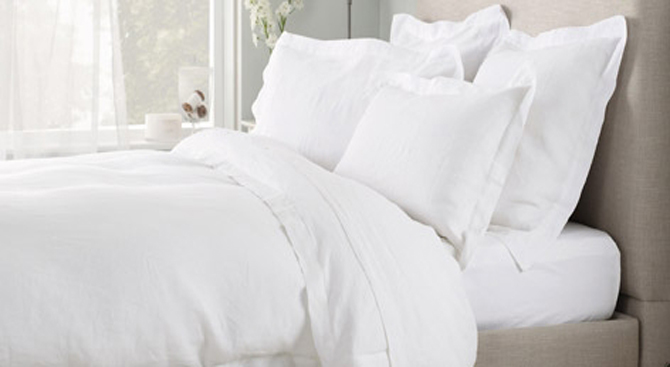 Now it seems everyone’s doing washed linen, have we shifted from high thread count cotton to linen as the luxury fabric of the moment?

It’s interesting how people have bought into our Belgian Washed Linen this year, it’s been really successful. We’ve done printed linen in the collection for the first time too and that’s just flown off the shelves. Linen isn’t cheap, it’s quite a considered purchase for customers so they’re not buying it on a whim. I think people are looking more at investing in product quality and there’s something very organic about the linen collection which taps into this trend.

I also think people are understanding linen a bit more now, historically it’s been the summer fabric but for bedlinen linen’s a really good all year rounder. People have misunderstood it because of the creases, but with the Belgian Washed Linen range, it’s so much softer. Yes, it will still crease but in a way  that’s part of the whole look. We tumble the linen which softens the memory, flax is quite a stiff rigid fibre so we work it to get it as soft as possible ready for use.

All fibres all have memory, cottons have a wonderful memory, as you go up the quality ranking of yarn counts so the memory intensifies as well so the 720 thread-count cotton will crease a lot more than the 200 thread count cotton because the memory’s there in the better quality cotton. With linen, you know how after you sit in linen trousers and you get sharp creases? Well it holds creases so well because it has a good memory…we tumble the individual pieces of bedlinen in big machines which softens the memory to get that softly crumpled look…

How do you judge quality on linen?

The linen yarn flax, grows best in cooler climates, so look for where the yarn is originally from, Irish or Belgium yarns are good.

Menopausal women have real night time temperature issues, any tips for what to chose?

Linen is great for maintaining an even temperature, we perceive linen as being light and airy but in fact it can be warm and cosy too and that’s because flax has similar properties to wool; it’s good at cooling you and warming you because it reacts to your body temperatures. I’ve always had heat issues, my husband gets quite hot, where as I start off cold then get hot and I never have anything heavier than a 4 tog duvet all year. We used to have the Dorchester sateen, which my husband loved -but I persuaded him to swap to the washed linen and it works really well because it reacts to our individual body temperatures. I have the best rested sleep on the linen.

Also the cotton flat weave percale feels slightly cooler on the skin than a sateen weave. The sateen has a more complex weave so there’s more chance to trap warming air in the threads..the flatter plain weave percale can’t trap air so feels cooler, so that’s a good choice for a good night’s sleep.

So there you have it, interesting isn’t it? I hope you are now better equipped to buy bedlinen. But there’s more, so come back next week to hear Vanessa’s laundry and storage tips for how to have beautifully organised linen cupboards.