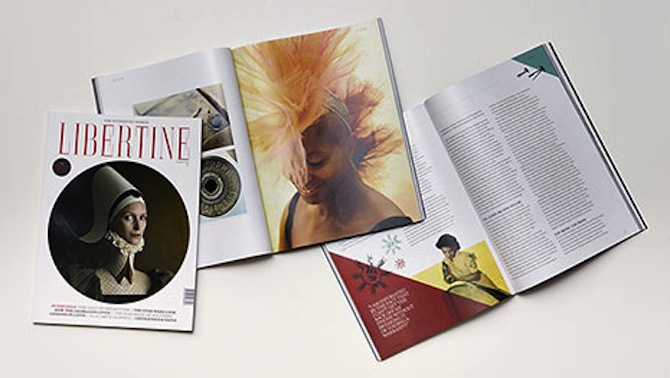 While there are lots of great, lifestyle, culture and food magazines around at the moment, we were despairing of the women’s magazine market – there simply wasn’t a monthly read which made us think and captured our imagination – until now.

Give us some background about you and why you decided to start Libertine?
I always wanted to write. In fact I tried to start writing a book when I was nine; it was pretty much a cross between Nancy Drew and Sweet Valley High. I started doing work experience at various mags at the age of 15, although straight after uni I went to work for a number of startups and small companies: first in sales and business development at a charity recruitment site, then project management at a b2b tech agency, before I got back on the journalism track. I think one of the reasons I wavered off course for a bit was that I could never really picture myself at any of the magazines on the newsstand. The longest internship I did was actually for Front magazine (!) which, although it was pretty questionable in many respects, was at least transparent about its objectification of women and had a decent sense of humour. I’ve never been that into fashion or trends and could never understand the appeal in knowing who actresses were sleeping with, or where they got their legs waxed. So it was natural to want to create something different.

Define the Libertine reader?
Our one liner is “widely interested women” – which is deliberately broad. I don’t think this is a niche magazine; the longer Libertine is out there the more feedback I’m getting from people saying “I never usually read women’s magazines, BUT…”. So I suspect our audience is going to get much bigger as more people find out about us – and it’s certainly bigger than a lot of traditional advertisers think it is.

Why do you think mainstream media has lost its way for intelligent women?
A lot of it is down to the industry’s reliance on advertising and advertiser perceptions of what their audience want. It is a difficult one, commercially speaking. We all know that the Mail Online has more hits than most quality newspaper sites put together but no one would argue their “wall of shame” does society any good – it’s like junk food. Gossip mags like Heat are much the same, and the desire for that kind of content will never go away. But in order to have proper media literacy and limit the damage that kind of content does to young women’s self perception (and the perception of women in general in the media) there does need to be a balance struck – so in creating Libertine I’ve gone to the other end of the spectrum.

I notice you don’t have any fashion and beauty in the magazine – do you intend to cover this in the future or are you consciously staying away from these subjects?
I can’t foresee having any beauty at the moment. If we did, it would need a seriously interesting, QI-style angle: a cultural comparison of make-up habits, or the changing significance of red lipstick or something. I’m making those up, there may not be a story there! But you know what I mean. We would certainly never go near ‘LOSE WEIGHT NOW’ or ‘Hot summer skin secrets’.

We will feature some beautiful things to wear, but we won’t do traditional fashion editorial – by which I mean I have absolutely no interest in what is happening on the catwalk every season. The women we’re speaking to know what they like wearing and they’re perfectly capable of having a look in the shops and making their own minds up – unless, of course, the magazine is the shop, like what Net-a-Porter and Grazia are doing. I do really like clothes and we do showcase a lot of luxury product – everyone likes looking at attractive, well-designed things – but it would be nice to only include long-term and timeless investment pieces rather than encouraging consumption based on fleeting trends.

As the mother of a 17 year old daughter I despair of her reluctance to call herself a feminist, although I think this is starting to change. How would you re-brand feminism for the younger generation?
I’m not sure that’s something within our remit! I have also noticed a disenchantment with the word, particularly among my younger (20-something) friends. Perhaps that’s symptomatic of the Gen Y mindset (of which I am – just – a member). They are, broadly speaking, optimistic, with a strong sense of morals/ethics/justice, and they want to fix and change things. I think there’s something about dwelling on what’s broken rather than trying to fix it which feels a bit ineffectual. Not that feminist debate, and political debate more broadly, doesn’t have an important place – it absolutely does. But if there’s going to be any real change in mainstream media we need to put all the complaints to one side and just create the media we want to see – then hope others feel rewarded by it and follow.

What do you read to inspire you?
For long, really stimulating reads, Aeon and Pacific Standard are brilliant. For shorter, equally stimulating reads, Brainpickings or Fast Co Create. The British Psychological Society blog is ace too, as are New Yorker and Vanity Fair. For pictures, I love the pen and ink tumblr – illustrations of people’s tattoos with the stories behind them.

Finally where can we buy Libertine?
Online at interestedwomen.com, or at a selection of shops in London – see the site for stockists.

Our Weekend Woman can only be Patricia Arquette this week, for her impassioned speech on the need for pay equality for women, at The…