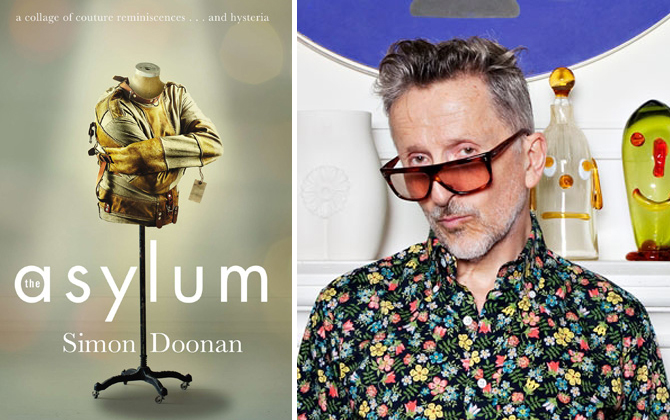 Simon Doonan, the British-born Creative Ambassador-at-Large to New York based store Barneys, joined NYFW creator Fern Mallis this week for a conversation on his latest book; The Asylum: A Collage of Couture Reminiscences … and Hysteria.

Doonan sees the whole fashion industry as an asylum – a place where unemployable crazy people are always welcome. “It’s for all the eccentrics, gypsies, freaks, creative and idiosyncratic people,” said Doonan. And as eccentricity and extremism are the foundations of great style, according to Doonan, no one is more suited to the ‘asylum’ than the truly die-hard fashionista.

Illustrating the disconnect between the fashion and everyday world he said, “Everyone is wearing Fishnets!” A statement fully understood in the fashion world where insiders’ see  patterns and trends in everything, but to Doonan’s close friend ‘Lizzie’ – a psychologist – it irked the response, “My hospital is full of people seeing patterns when there are none.”

Exchanges such as this inspired the book, which draws many parallels between his and her professional worlds. He notes; once you start looking, you’ll notice telltale signs of lunacy everywhere – including US Vogue Editor Anna Wintour remaining perfectly calm, while a ceiling fell during Fashion Week.

Inspiration in the off-kilter – much like seeing fishnets everywhere – is also a uniquely fashion insider’s perspective, according to Doonan.

Doonan told how the 1975 documentary Grey Gardens, which depicts two reclusive mother and daughter socialites living in squalor, inspired a Barney’s Fall direct-mail catalogue. Psychologist Lizzie’s reaction to the shoot was however not one of inspiration or aspiration, “when I watched the movie, all I saw were potential symptoms of schizophrenia and suffering, and all you can see are Styling tips. You fashion people are just as Twisted as any of my patients.”

It’s ALL about beauty products this week on TWR. As we all keenly await Jane’s review on NanoBlur (or Nan Blur as we’ve renamed…