This video from GoldieBlox, who have developed a set of interactive books and games, was created to “light girls inventive spark early, supplementing the usual diet of glittery princess products with construction toys, from a female perspective.”

CEO, Debbie Sterling, studied engineering at Stanford and was dismayed by the lack of women in her program. As the GoldieBlox website points out, only 11 percent of the world’s engineers are female.

The advert aims to ‘disrupt the pink aisle and inspire the future generation of female engineers.’

It’s a great example of how intelligent brands are re-looking at the messages sent to girls/women, young and old, through advertising and media –  a conversation which been increasingly front of mind over the last few months, as some of the more mainstream magazines have decided that feminism is an issue they should be discussing.

Elle magazine were aware that young women in particular were reluctant to call themselves feminists, mainly due to the negative stereotypes surrounding the word and engaged three advertising agencies to help them “re-brand” the term. 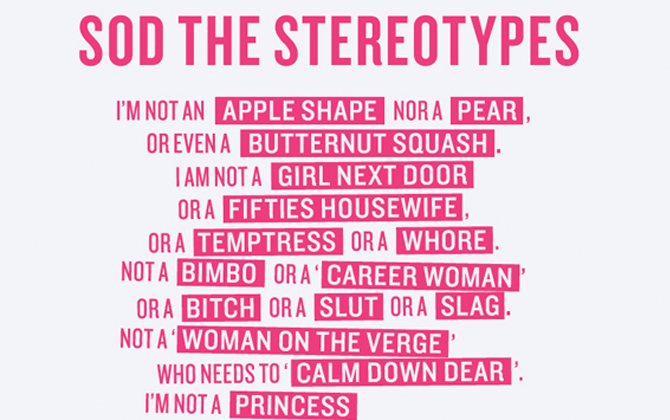 The campaign received mixed responses, with many (including me) wondering if feminism was simply just the latest trend the magazine world wanted to tap into. After all aren’t women’s magazines somewhat responsible for promoting negative body images and low self esteem, particularly for young women? It was an interesting discussion with more or less everyone agreeing that feminism was about being whoever you wanted to be and the reason it need to be re-branded, was that the extreme academic and activist associations made younger women reluctant to get involved.

Ikarama Laras summed it up – “My feminism is just that, MY feminism…there are as many Feminists as there are women”.

“We should constantly be challenging ourselves as feminists” – Ikarama Larasi.

“Feminism is the belief men and women are equal” – Rhiannon from Vagenda.

“Not sharing the opinions of all feminists doesn’t make me any less of a feminist” -Ikarama Larasi.

“There are as many feminisms as there are women. It’s about identity” – Ikarama

“Every minute you waste worrying about how you look, you could be busy doing something else”  – Rhiannon The discussion ended with questions, including one from a man, asking why there were no men on the panel. To which Jo Swinson replied, “it’s interesting, whenever there’s a women only debate in politics, I get asked that question, to which I reply, welcome to my world.” Needless to say, she got a huge cheer form the audience.

There is no doubt it’s a good thing that these conversations are taking place and that Lorraine Candy, the editor of Elle, is genuine in her desire to make feminism more accessible to the modern woman. But one wonders if an advertising campaign and debate is enough? Hopefully the Elle campaign is just the start and other publications start to take note and actually take a serious look at the messages they send out – as there is a new generation of intelligent women who simply don’t buy into the drivel they are fed on a weekly and monthly basis – and a whole generation of older women, who have given up on magazines altogether.

The Internet is a truly fabulous thing which has opened a world of possibilities, conversations and online opportunities for everyone, from big brands, the…