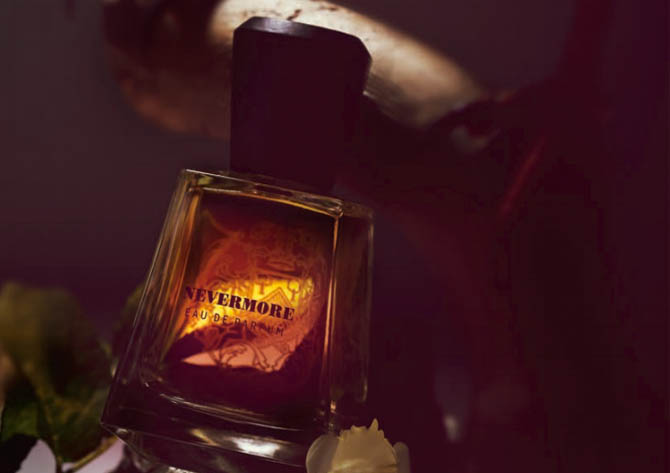 This new release Nevermore, from the heritage fragrance brand P Frapin & Co (the company was founded in 1270), is one of those smells that people seek you out to ask what it is. I have been trialling it and while at the cinema recently (to watch Pride, have you seen it? It’s fab) middleagedad spotted two couples leaning in to sniff at my sillage -in a good way I think and I’ve been stopped by strangers wanting to know its name.

It is actually aimed at men, but its a fence-sitter, gender wise and is a lovely non-floral rose for those who don’t want their roses too girly.

There’s a cute story attached to the perfume. Inspiration for its construction came from Edgar Allan Poe. Apparently an anonymous admirer left roses and brandy at his grave every year, until recently, when it stopped. Together with Poe’s poem Raven, which talks of a ‘now and forever blossom’, the Frapin team has created a fragrant homage to Poe’s darkly nostalgic tone.

Sounds gloomy but actually the fragrance is very good. It’s a rusted-up rose scent, with hints of peppery spice on first spray, with a complex mix of rose coming through in the middle, anchored with a saffrony cedar wood base. The wood note is gentle, not the whack of heaviness  that’s so popular currently, it’s a much gentler and elegant structure.

For sale through Bloom who will send you a sample of the fragrance prior to purchase, which is very useful. It’s eau de parfum and £98 for a generous 100ml bottle

Wandering the streets of Manhattan, one is overwhelmed with the sounds and the smells of the city. In the last couple of years the smells have been getting more and more enticing as street food ups its game and food…