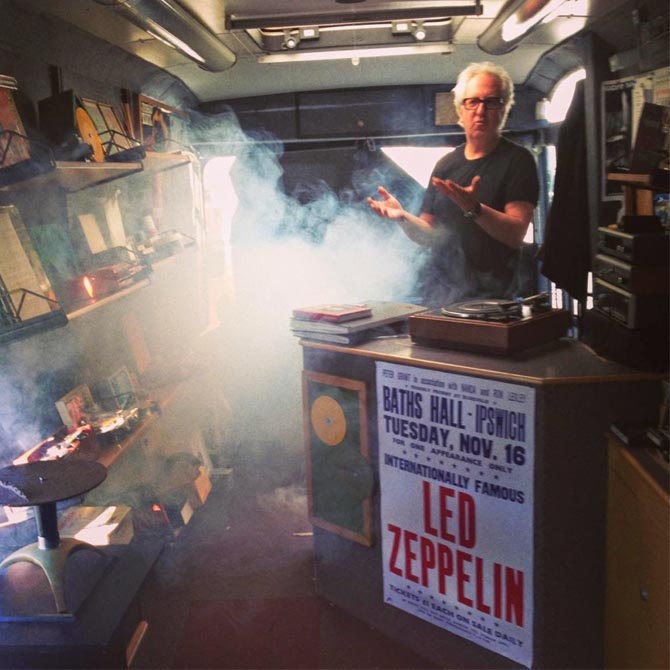 Middleagedad, plus smoke machine, in his art installation Resonate Generate

it’s a pop up 70s vinyl Punk V Prog record ‘store’, situated in an redundant Camarthen county council mobile library, which reflects on our emotional connection to the stuff we throw away. In this case, vinyl records from the 70s and all the paraphanalia that goes with it. Including the political undertone that if you scratch away 2014’s shiny, branded surface, it could be argued that not much has changed since the mid 70s.

Resonate Generate is the biggest installation in the show by a long way, it is listed as ‘monumental’ on the art schools press release. Currently parked in the Chelsea College of Arts parade ground, it has been hugely popular, with actual queues to get in for the first couple of days. Slightly stunned and surprised by all the love it’s getting, we caught up with the artist to ask a few questions. 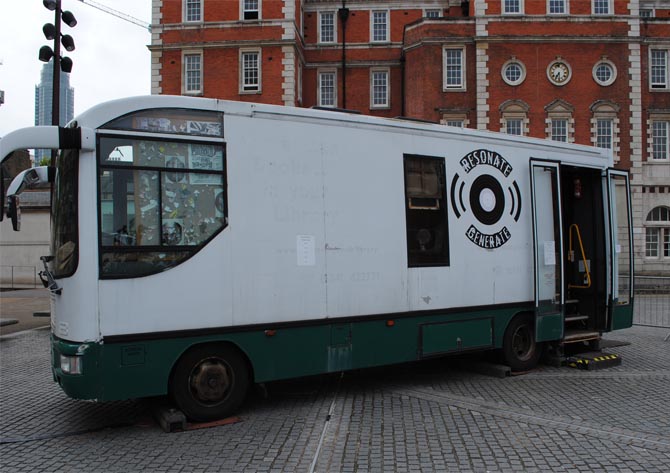 So MAD, what the heck is this Pop Up Prog V Punk music van all about, then?

The Resonate Generate project started with my artist in residence time at the Richmond Council recycling and re-use centre last summer.  Through that period I managed to collect lots of vinyl from the 70s that people were throwing away, together with lots of analogue music gadgets and other 70s items I recognised from my teens, so I started a 70s themed collection. I’ve curated all this, together with other work I’ve created connected to the project, inside the mobile library.

And how exactly is it art, and not just a bloke having a good time spinning his favourite records?

Well the whole installation is an artwork, it reflects on how important music is and how it connects us so strongly back to our past. I’ve also made a collection of bronze and iron casts of some of the found objects  and one of the ‘found’ items was a working Praktica film camera, which I used to create cyanotype images of other items that turned up.

But it’s the music that’s the big emotional draw.  I create a daily play list from the found vinyl, but any visitors that come in are encouraged to browse the records and request a track so they choose the music too, it’s very collaborative. The vinyl is also played on a 1970s hi fi system which is exactly the same as the one I had when I was a teenager. The response I’ve had from people listening to it is that the hi fi and the vinyl records have a real resonance, a richness that and depth that creates a really nostalgic sound around it. 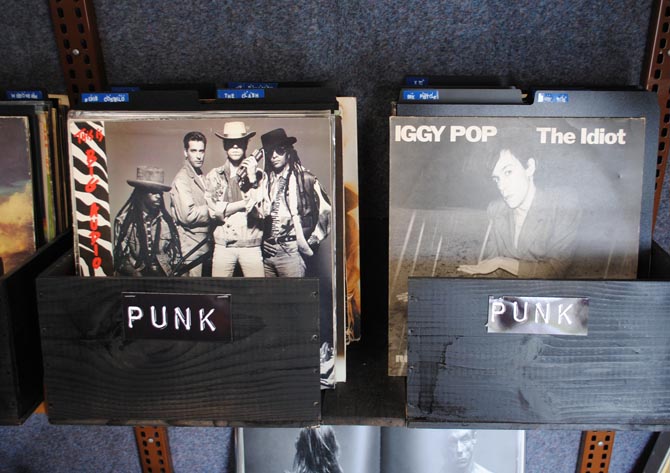 What’s been the best bit of the show so far?

I think firstly it’s very immersive, and very relational in that I end up speaking to everyone who comes into the mobile library.

I’ve been a bit taken aback as to how much people have loved connecting to the music from their past and how much they  enjoy the whole experience. But the highlight has been when families come in and I can watch the children and parents discuss which track off an obscure progressive rock or punk rock album from the 70s should be their choice.  Clearly music is not about individual memories, it’s shared memories.

And you’ve found that many kids with parents who were teenagers during the 70s love their music too, right?

I’m amazed how many 18-21 year olds have chosen Led Zeppelin’s first album as their favourite album, they really know their prog rock. And Punk too. 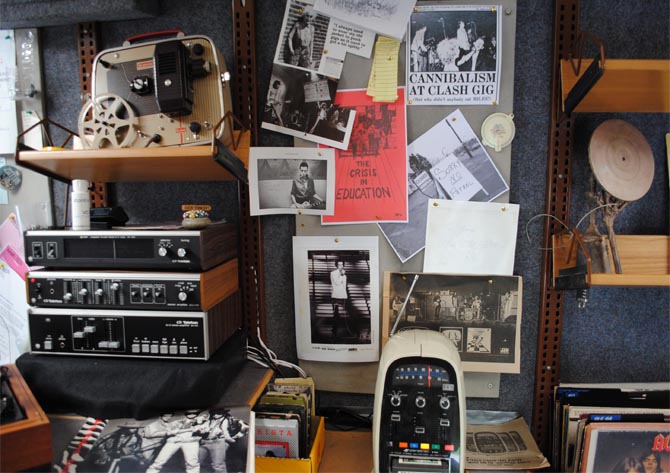 Apparently you’ve played a lot of Pink Floyd too?

I’ve tried not to, I don’t much like Pink Floyd. I was clearly in the Genesis camp at that time, but lots of people love Pink Floyd, in particular they love the image off the Animals album with the image of Battersea Power Station and the floating pig, which is fun because we are close to the power station building here, and they like me telling the story about the pig coming loose from its ropes and ending up in some field in Kent. 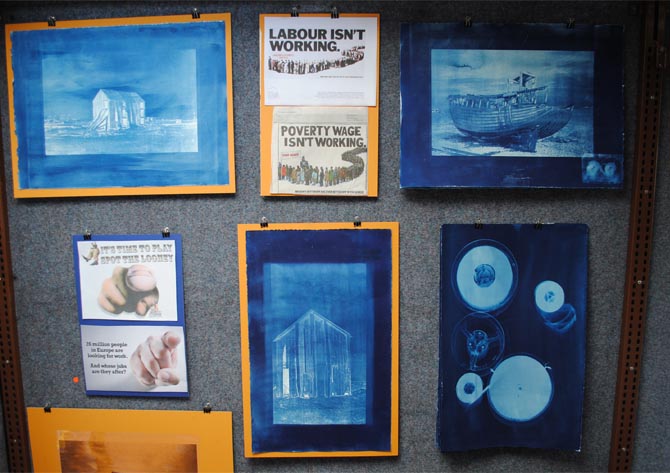 And I hear Mr Charles Saatchi came round….is this true or just an art school rumour?

Well I’m not sure on the etiquette of talking about it, but just between you and I, Mr Saatchi has indeed been round.

He walked passed the van on Monday morning and I introduced myself and invited him in. He said he was just going to go around the rest of the show and was leaving me until last, I don’t know if he new about me already, but he was back pretty quickly.

He joined us – my middleson was co DJ-ing that day- in the van and we had a really interesting discussion on his attempts so far to give his entire art collection to the nation, and how it was proving quite difficult. Weirdly, I had his ‘Labour Isn’t Working’ advert from the 70s up on the noticeboard, to support my theory that nothing much has changed since the 70s, so we had a chat about the background to that advert and how it became Saatchi & Saatchi’s most famous advert and how it was influential in helping to change the power base in the county.

And what did he think about Resonate Generate as a piece of art?

Well not that it’s etched on my memory forever or anything, but he said, “This is fantastic. it’s a very special piece of work. Well done.”

I’ll retire gracefully after that.

Resonate Generate is open from 10.00am until 8.00pm Thursday 19th (today) and Friday 20th and until 5.00pm on Saturday 21st of June, so pop down and say hello if you are around. On Friday I will be the co-DJ for the day, spinning mostly Kate Bush, Joni Mitchell, Ricki Lee Jones and Joan Armatrading, With the odd Earth Wind and Fire Track. Chelsea Parade ground is right next to Tate Britain too, so you could pop in and see Phyillida Barlow or the newly opened Folk Art show and make a day of it.

More about the project here

So, we joined the very civilised queue at the Westfield store and had a good long rummage through the +J range for Uniqlo. Our verdict? It’s fab. Oh! that all collaborations between brands /retailers/whoever were as good as this. The…