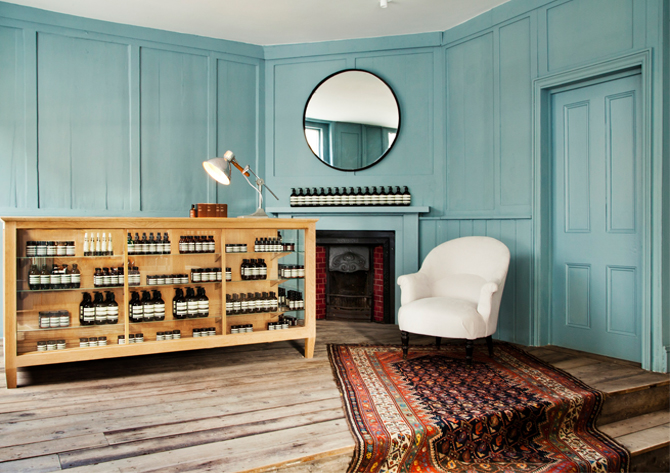 Last week I went to the opening of the latest Aesop store, just down the road from me in Richmond. The brand has taken over a spot that used to be the most wonderful children’s bookshop, The Lion & Unicorn. All three sons learned to read on books bought from their stacked shelves. Harry Potter first came to our lives via the owner’s recommendation and eldestson still has the photo taken in the store of him standing shyly next to his literary hero (at the time) Anthony Horowitz.

Phew then, that the new store has a) done an amazing job of taking the building back to its original Georgian roots and made it look beautiful b) got an event space on the first floor where they are hoping to get -among other things- the bookshop’s original owners back to do children’s book readings.

Aesop stores are a treat to shop in, every one is different and all manage to make me want to take bits of them home with me. I spoke to the UK’s head of VM (what a nice job) Deidra Hodgson, who explained that all Aesop stores try and fit in locally and Richmond will also have pop up events and even maybe a cafe. The third floor will have Aesop treatment rooms, the first outside of Australia, which I for one, would travel miles for. (BTW there’s also a beautiful Anthropologie in Richmond too now, so double the reason to visit) That fabulous blue on the walls is Sanderson Blue Stone on the ground floor (above) and Sanderson Blue Clay on the first floor (below). Isn’t it a good blue? 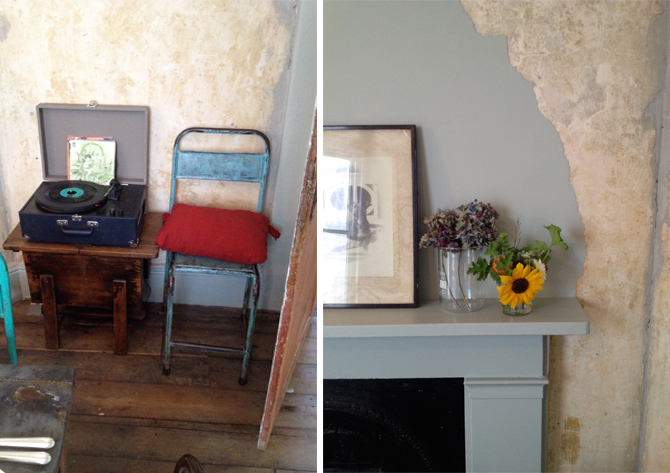 While we were surrounded by top level Aesop people, I grabbed the (grown up) european marketing director Pascale Thouzery, to ask her what she actually used from the skincare range. It’s always good to get someone from the brand to advise you, since they use it and really know the insider tips on what’s good. And Pascale was a total enthusiast.
[show_shopthepost_widget id=”306894″]

She suggested that our readers start with the B Triple C Facial Balancing gel, as a way of preparing for winter weather, it helps protect against pollution and the seasonal change of temperature and humidity. She’s using it as its a good pre- season moisturiser for her slightly oily skin. Then the Perfect facial hydrating cream is super. super rich and plies the skin with vitamins and lots of rejuvenating hydration. This is a good winter cream. Although not cheap, Aesop stuff smells divine and is very good quality, so do last a reasonable length of time.
[show_shopthepost_widget id=”324566″]

She also recommended the ‘super-cleaner’ the Parsley Seed Cleansing Mask, which is not, she is keen to point out, a hydrating mask, but one that really cleanse the skin, which you ned to use once or twice a week, depending how grubby you get. And on a daily basis, she loves the Parsley Seed Cleansing oil, which starts off as a gentle oil which you pour into your hand, when you add water and apply in circles to your skin it is a gentle but effective cleaner off of make up and daily grim.“I’ve bought the Perfect Hydrating Cream and the Parsley Seed daily cleanser, I’ll let you know how I get on”

You might remember my enthusiastic post on the pop up New Craftsmen Garage late last year, which I was a little late telling you about. Well…