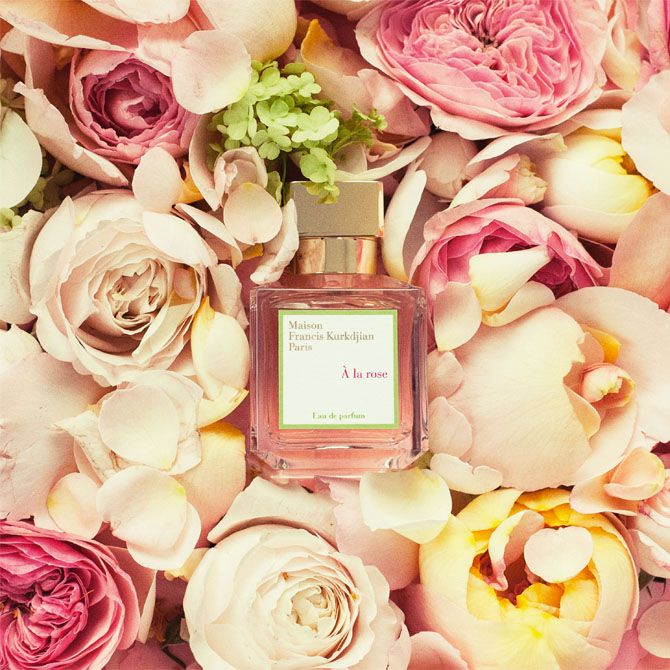 If you are a rose lover, then pay attention to this new fragrance by Maison Francis Kurkdjian, which is an exquisite blend of the two roses rosa damascena and rosa centifolia. Á la rose is a light bright rose that is reminiscent of sticking your nose right down into one of your David Austin’s and inhaling deeply. I chatted to its creator, Francis Kurkdjian, at the launch, who explained that inspiration was partly taken from a portrait of Marie Antoinette, called Á La Rose, painted in 1873 by Louise Elisabeth Vigée-Lebrun. He discovered it while researching Marie Antoinette for a project he undertook with Versailles to recreate her original fragrance (tricky, since there were many false claims on originality),

The portrait first appeared with Marie-Antoinette looking demure and clad in muslin, during her ‘shepherdess’ phase. The low-key image caused an outrage in France, with complaints that the queen looked too ordinary and dowdy. The French were never ones for norm-core it seems. So another version was painted, with the addition of sumptuous laces, silks, totally on-trend-right-now-violet-grey-hair and posher feathers, a bit more bling in other words. The rose remains the same in both version.

Á la rose is launched in February at Liberty, or from the online store here Growing up without the internet and only three channels on the tv, meant magazines were a monthly visual & editorial treat providing all the…