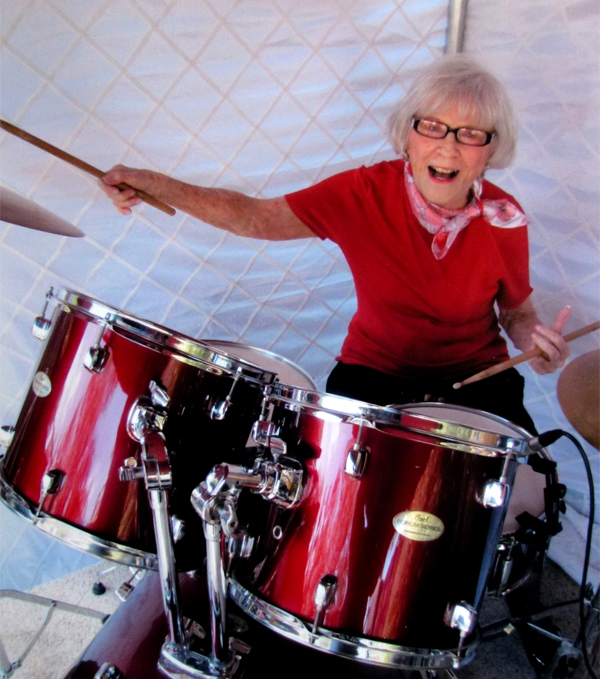 I intended to write about musician PJ Harvey as our Weekend Woman this week, as I’m off to see one of her Recording Sessions at Somerset House this week, but I am indebted to middleagedad who while researching for an art project came across the wonderful Viola Smith, an American drummer who broke down many sexist barriers for female musician way back in the 1930s, 40s and beyond. Viola is 102 years old and still drumming.

She started her career young, forming a band with her sister Mildred called The Coquettes, and pretty much never stopped drumming, changing attitudes towards women musicians as she went. Watch the video below and see her in action, she really is fabulous and has lost none of her style. The above image was taken in 2012 to celebrate her 100th birthday and there’s an excellent interview with her here.

She claims that the war helped break down barriers for women musicians as she was able to persuaded big band leaders to take on talented women musicians rather than second rate male musicians (left behind after the draft). Once the industry saw that female band players were (surprise!) just as good as men, it became a lot easier to get jobs.

I bet Viola’s story would make a great film, I mean Whiplash is great an’ all, but don’t you reckon there’s an interesting tale here waiting to be told?

Maybe Polly will make it as a WW next weekend….

We are huge fans of 50’s and 60’s furniture and are always on the look out for bargain Ercol or G Plan pieces – if there is such a thing? I am also a lover of patterned wallpaper and have…