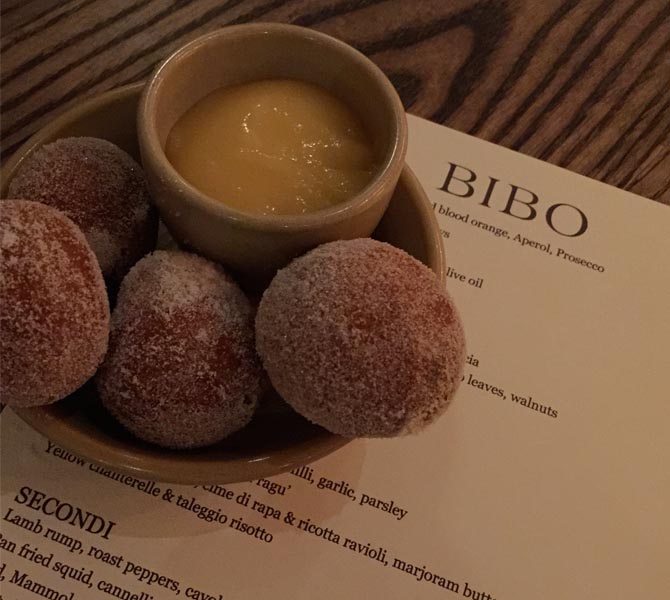 I got to know my Barnes neighbour Rebecca Mascarenhas by reputation before I actually met her, because she started Sonny’s restaurant in Barnes not long after we first moved here and it became one of THE places everyone went to eat out.

After Sonny’s followed a string of successful West London eateries, which turned Rebecca into a bit of a legend amongst us local womenfolk, as she did this alongside juggling a family (three gorgeous daughters) a marriage and mentoring a number of start-up businesses.

How did she do it and stay sane? How could she succeed as a woman in a very testosterone-ridden restaurant kitchen? More importantly, how could we get the recipe for the delicious rosemary-strewn focaccia bread she served in the Sonny’s kitchen shop? Who knew? Not me as I never got to know her well enough to ask.

Life went on. We all got older.

Then recently, our paths crossed properly and I discovered (thrillingly) that she was a keen TWR reader. Ever the nosy journalist eager for the next blog post (not to mention a delicious meal) I suggested we could review her new Putney restaurant Bibo, while trying to answer some of those questions about how she survived and thrived.

So, Rebecca, how DO you get to be a successful woman in the restaurant business?
I’m an entrepreneur, I always have been. My husband says I’m a gambler and I do love that thrill. I’ll always take a punt, sometimes things go wrong, but that’s the fun and I’ve kind of learned now what works and what doesn’t in restaurants.
I always wanted to work and although I didn’t plan it that way, I’ve ended up the breadwinner. In this industry, as a woman, I occupy a unique spot because I’m not the chef or the chef’s wife, or the operations director, I’m the owner. And I’ve got a few restaurants now so it’s clear I know what I’m doing. Like any woman, we’ve all had issues with sexism. When I’ve been called ‘bossy’ or “she knows her own mind” no one means it in a good way, it is always slightly derogatory. If I were a man of course, I’d be a ‘leader’!

A long time ago a man said to me ‘you’ve got a very big job for a very small girl!’ Can you believe it? I was the MD too!

Is there still sexism in the restaurant business?
Things have improved but it’s there, so we have a mentoring programme for the young women in our restaurants, just informal get-togethers where we cover the insidious way women can be regarded in this industry. They need to learn how to stand up for themselves.
I have three daughters so I’m mindful of their progression in the work place. We had terrible arguments about feminism when they were in their late teens, they thought the battle was won, now they are in their twenties and out in the work place, they’re finding prejudice when they didn’t expect it. 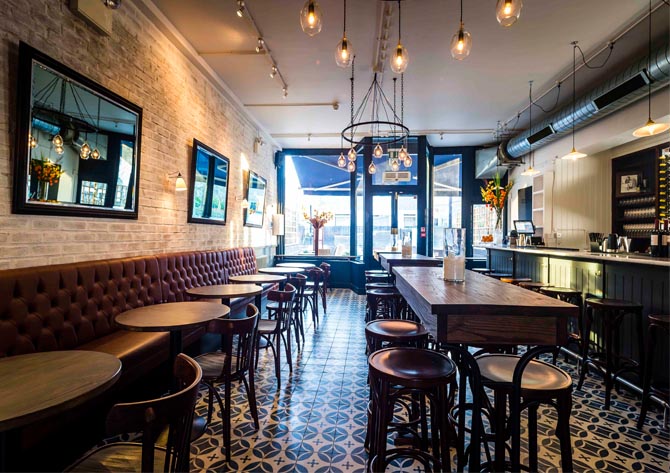 Bibo, Putney, aren’t those great tiles on the floor?

What’s the thrill in running a restaurant?
I’ve run West London restaurants for 30 years, Sonny’s, my first one, is going to be in its 30th year on April 2nd, which makes it a dinosaur In restaurant terms! We’ve been here so long now we often have four generations of the same family come to the restaurant, the grandmother, the parents the kids and now their kids, sometimes all together. For me and my staff, that’s what success is.
I think also, although I’ve not got any facts to prove it, that it’s a less transient population in West London, once they get here they don’t ever want to move away.

And yet all the vibe is about East London!
There’s no doubt there’s a raw energy in Dalston and Peckham, but I’ve always been biased towards West London, as for me it’s completely where my family is. I can walk everywhere and I love the green spaces we’ve got. I love that I know all my local shop owners by name, maybe when I was younger I would have thought that was boring but now that ‘community’ is really important.

Restaurants and kitchens seem a tough place to be, are you a confident person?
Do you know what, that’s SUCH a loaded question! Sometimes when I lie awake at three in the morning I think. ‘Oh my god, I did this wrong and that wrong… how could I have done that thing…I must be deranged…”
But I must have done some things right as I’ve got a lot of people to march in the same direction, so I guess I must be reasonably confident.

What advice would you give women thinking about starting their own restaurant?
I’d never say ‘don’t do it’, but start by getting a job in the industry to see what running a restaurant actually looks like, learn from the inside. Apparently one of the most popular things to do with redundancy money is to set up a restaurant, people think ‘I’m a good cook my husband knows a bit about wine, let’s open a pub or a restaurant’. But it has the highest bankruptcy rate of any new business.
Also, surround yourself with experts and don’t be afraid of asking for help. Women tend to be afraid of asking for help because they’re worried it’ll make them look stupid. Don’t worry about it! 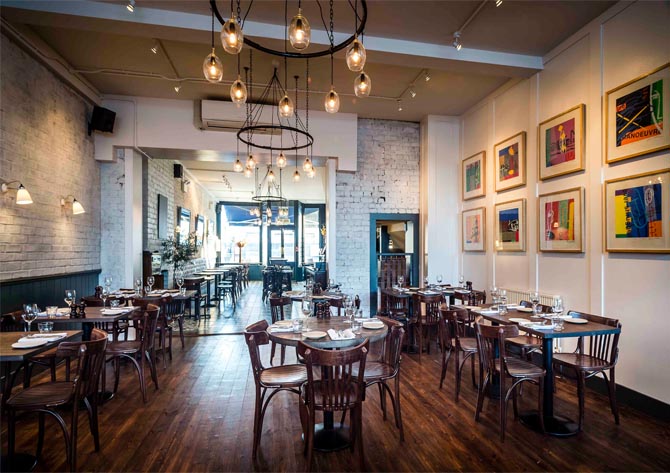 Bibo, Putney, get yourself along there if you live close by

And what keeps you successful?
As much as I love the business side- I love the numbers, love the mentoring – I really just love food. I’m obsessed with ingredients, why this fish, not that fish, why this oil, not that oil, it’s what drives the restaurant.
I’m not that obsessed with chef technique, I’ve fallen foul of a lot of chefs who like to stuff things into other things, I’ve had major falling outs over that. I feel a bit sorry for them as they’ve worked hard to learn the techniques, and then I come along and say ‘too complicated!’
I’m also shocked by the plight of the dairy framers, what are we going to do when they sell all their herds and there’s no one left farming? What’s wrong with us if we wont spend another 3p a litre for good milk? I know I speak from privilege and I get stick every time I say it, but food just can’t be this cheap, so we need to box clever about how we eat and what we cook.

So that’s how you do it.

And what of Bibo? It was delicious. The space has a New York-y kinda vibe, low lighting and a great bar. Try the Pasta e ceci, with the ‘best chickpeas out there’ according to Rebecca, or the home made pappardelle with slow cooked beef ragu that will remind you of something magical you once had in a bar in Milan. And the Bombolinis! Do NOT leave with out having tried the tiny doughnuts dusted in sugar and served with a Seville orange curd….or Amalfi lemon curd when these runs out, as they will shortly.

I still don’t have that focaccia recipe, perhaps when she opens the next restaurant…

Harold and Maude has to be one of my all time favourite films and the older I get the more significant it becomes. The…