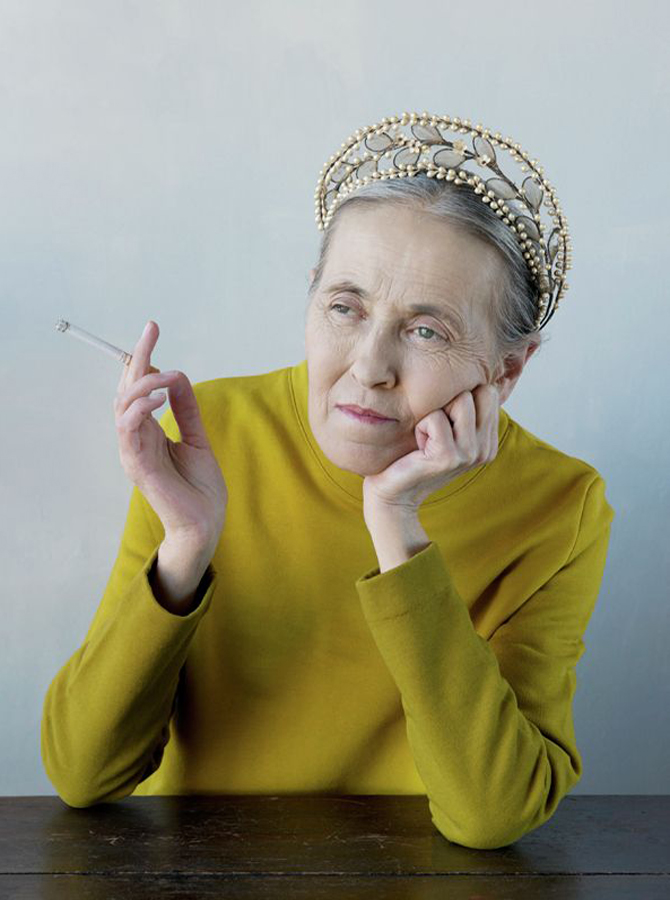 The lovely new issue of Selvedge magazine is out now, and it’s the Ageless Issue, which I have contributed to with a feature (ahem, it’s a bit of a rant actually) Free For All on the out datedness of age appropriate attire. The editor Polly Leonard, has kindly allowed me to reproduce it here. Craft fans need to mark Saturday 25th April in their diaries as it’s the Selfedge Spring Fair. See you there?

When Jane and I started The Women’s Room Blog in 2008, we were in our mid forties and desperate to rebel against what we considered the outdated concept of dressing our age, what ever that actually meant.

As fashion enthusiasts, we were not prepared to ‘disappear’ clothes-wise, once we reached mid life and were certainly not ready to slip into nan-cardigans and navy slacks as our mothers might have.

Working inside the fashion industry as trend forecasters (our day jobs), we became aware that older women–and in fashion, remember, anyone over 30 is ‘older’ – weren’t supposed to ‘do’ fashion. We found ourselves treated like an outdated trend, and just like the pashmina and the cargo pant, were no longer ‘of-the-moment’.

It seemed the fashion industry – and society generally- was delighted to embrace a vintage textile, but not so keen to encourage the showing of too much vintage skin. Once we could browse the joyously frivolous prints, colours and textures of Topshop clothes, now the sales staff assumed we were buying for our daughters.

The ‘rules’ we were supposed to follow; restricting hemlines and even frowning on bright colours, were to save us from that heinous fashion crime- mutton dressed as lamb. Dressing our age seemed to mean investing in ‘classics’ (for which, in this context read ‘boring’) and abandoning mini skirts and bikinis forever. It came as a bit of a shock to us, surely the concept of age appropriate dressing was dead? And where did all these rules originate?

Cassie Davies-Strodder, Curator of 20thCentury Fashion at the V&A, explained that as far back as the 18th and 19th century, cartoonists had satirised women who were dressed inappropriately for their age and women’s magazines and etiquette books also had much to say on the matter. Heavier, darker fabrics were the wardrobe staple of the mature woman and older married women were expected to cover their heads with a lace cap when indoors.

According to Cassie, even in a period of more relaxed codes such as the 1920s when hemlines rose and strict Edwardian rules of dress were abandoned in the post-war climate, etiquette remained strict on what was appropriate dress for the ‘mature woman’. A rather severe little book, Harmony in Dress published by the Women’s Institute in the mid 1920s advised ‘The mature woman owes it to herself, her family, and the world at large to be as becomingly and appropriately dressed as intelligent effort, skill and available money will permit.’ The stern tone taken in Harmony In Dress at the time goes some way to explain why the fashion industry still ignores us. When the boyish ‘Garcons’ look appeared during the 1920s, its advice was firmly that older women should not follow the ‘extreme modes of the moment’ or ‘designs that are unmistakably originated for youth’.

It all sounds horribly familiar, but surely things are changing? According to Cassie, not that much, “Appropriateness of dress for older women is still high on the agenda and what is worn by high profile, older women inevitably results in discussions of propriety in the press.” She said.

Having researched the recent fashion for platform heels for the forthcoming exhibition ‘Shoes: Pleasure and Pain’ at the V&A (13 June 2015 – 31 January 2016), she was struck by the reaction in the press to actor Helen Mirren wearing the trend on the red carpet. “The comments were disapproving and in some instances even angry” continued Cassie. “If the press hadn’t drawn attention to this would anyone else have cared? Although we have moved on in many ways, it seems the press at least are still bound by the double standards held up in the etiquette book of nearly a century ago”

Thankfully, we are part of a rule-breaking generation of females who don’t want to dress like our mothers or be hemmed in by the sartorial age restrictions they may have endured. Women who had cut their fashion teeth in the 60s and 70s learning how to clash a tangerine nylon shirt from Chelsea Girl with a maxi patchwork skirt with exotic ethnic origins picked up on the newly invented high street, had every intention of dressing just as boldly as grandmothers. Visionary retailers such as Selfridges are on our case too, challenging the traditional narrative of ageing this January, with concepts such as Bright Old Things in, a celebration of older folk who had retrained rather than retired.

Sue Kreitzman, previously a food writer with 27 cookery books to her name and now a full time artist, was one of the Bright Old Things selected. She designed a window full of her textural sculptures and curated a selection of designer clothes as part of the Selfridges spring fashion offer, using her exuberant appreciation of colour and pattern. Does she adhere to any age appropriate dressing rules? “The whole idea is ludicrous,” she said. “As at any time of life, dress for your body shape, your style. I have a deep need for colour and art and I curate myself every morning. I am a walking collage!”

Originally from New York, Sue acknowledged things were different in her mother’s day. In the 1950s and 60s, older women still were expected to adhere to a more conventional style as they aged. Where status symbols of the day; a mink stole, a good handbag, a gold charm bracelet commemorating important life events, were the age appropriate trophies of a life now over in terms of sartorial experimentation.

Rather than shop the slim pickings brands offer our age group, Sue has most of her clothes made for her, often featuring her fabrics and drawings. She said “I like direct collaboration with artisans I love and respect. Diane Goldie is particularly adept at hand painting my work onto kimonos in a very enchanting way. I buy lots of African wax resist fabric in London and New York, then design kimonos with mismatched panels, and have them stitched up by a local tailor.”

Attitudes to what older women want to wear are, finally, changing. Fashion brands have started to select older women for their all-important marketing campaigns, giving us a few more role models to be inspired by. In 2015 alone we’ve seen Joan Didion model for Celine, Joni Mitchell for Saint Laurent and Julia Roberts for Givenchy. Our personal favourites were the tiara-wearing grandmothers in Dolce & Gabbana’s Spring 2015 launch, showing they could rock a floral headband as well as a twenty year old.

So although none of us want to look ridiculous as we age, the idea of abandoning an interest in contemporary design to remain ‘age appropriate’ is itself out of fashion. Clothes matter to older women, we know this from the comments left on our blog and from the many older women we have interviewed. Age gives us the experience to choose fabrics wisely, to know what shapes suit us, what colours we love. One could argue that this expertise gives us the confidence to embrace experimentation and dress in even more exciting and daring ways.

The Ageless Issue of Selvedge is available here

We love ballet and we love a psychological thriller, so Black Swan, (released in the UK on Jan the 21st), ticks all our boxes. Set in the world of New York city Ballet, Natalie Portman stars as Nina, a prima…