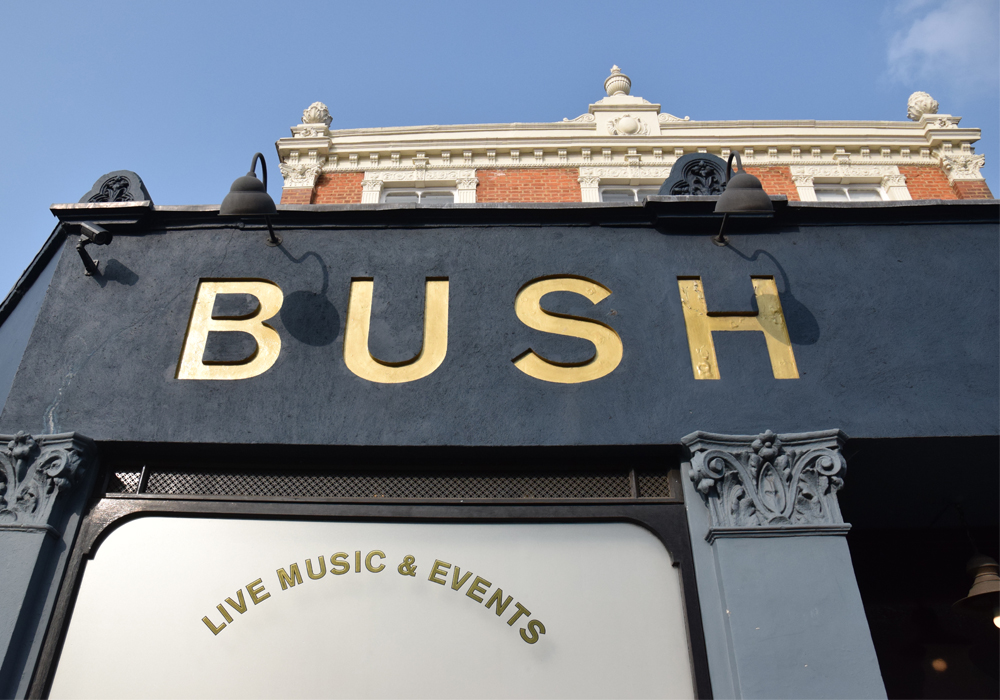 With all this talk of exciting East London, poor old West London can sometimes feel like a dull, country-living cousin always wearing the wrong clothes….Of course anyone who actually LIVES in West London knows better, I sometimes wonder if we don’t quite like the attention being focussed elsewhere so we can actually get tables in restaurants and not have to dress ‘fashion’ every time we go out of the house – have you caught an overground train in East London recently? It’s like you’re on a shoot for i-D magazine.

So it was with a little trepidation that I recently heard that Shepherd’s Bush  -or SheBu as the Aussies often call it -might be the new Hackney. Or Shoreditch. Or something East. Not East as it is now, but the heady, innovative days of around 15 years ago when interesting food and clothes shops, artist studios popped up everywhere with a bit of a cool vibe.

So with TWR’s intrepid occasional contributor Julia Little, we headed out on a retail and food safari to observe our local habitat. 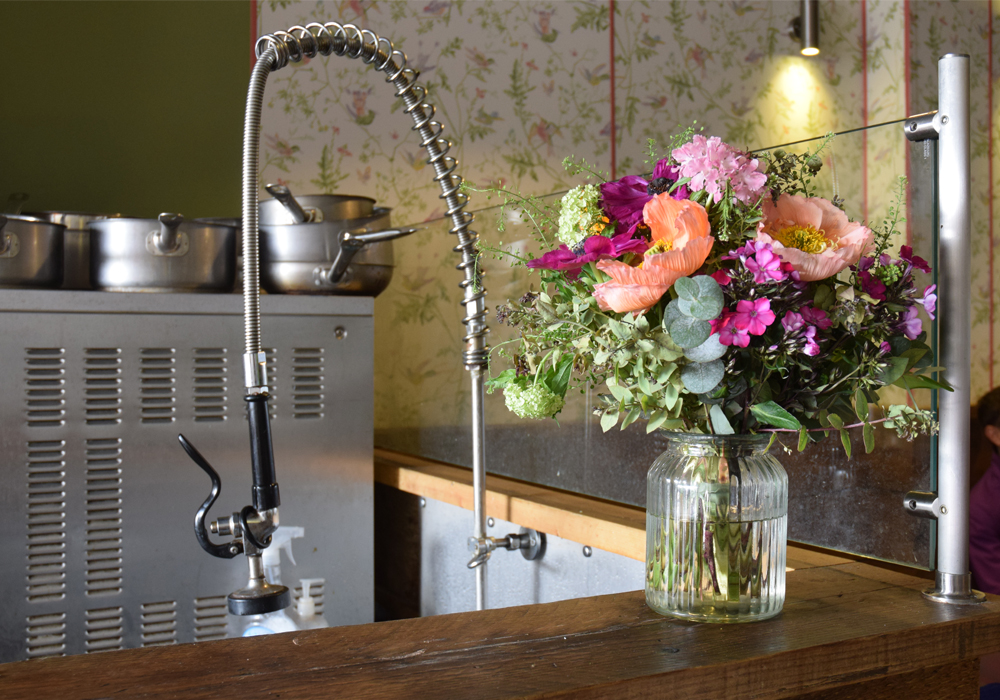 Food is often a good indicator of change, we already know Bush Hall is both a beautiful place to see bands (Lou Doillon is on in April) and a great place to eat (the Alt.Rock menu is great value and delicious), but there are artfully decorated new joints such as Habanera’s Mexican, with its sweet green walled restaurant and its under-the radar, word-of-mouth recs, fancy burger bars Amigos and Burgista Bros on Shepherd’s Bush Green, as well as the two Hummingbird Cafes, which serve up great deli and cake treats, on the Uxbridge Road. We were rather taken with the QPR buns from Hummingbird, below. 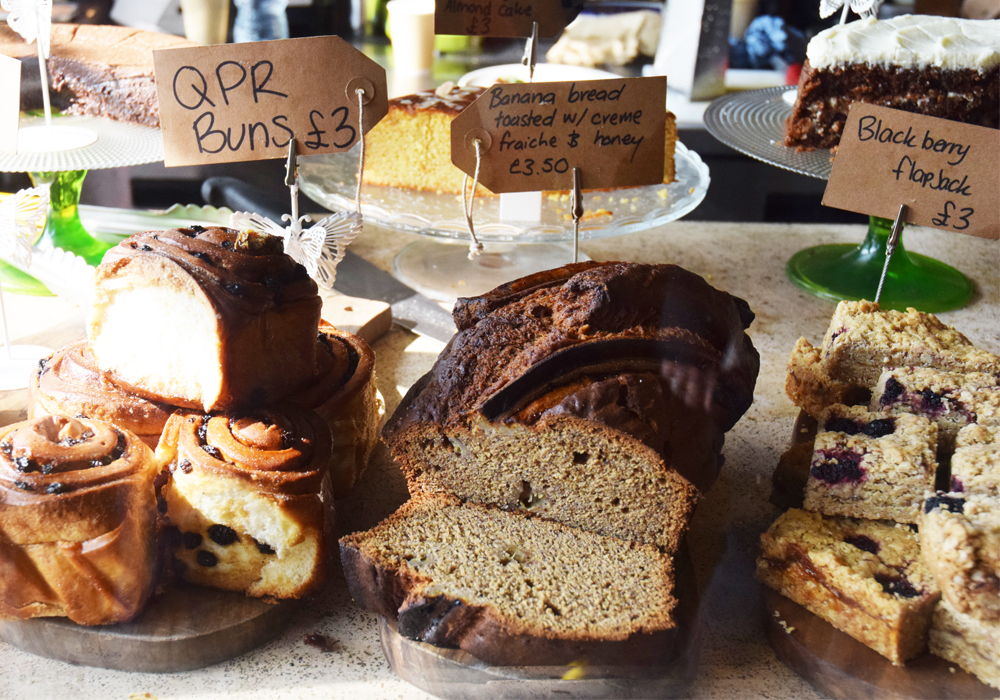 All very fabulous, but not really edgy enough to warrant anything other than rumbly tummies.

What an area needs to be cutting edge is, perhaps, an artisan bread bakery, such as the gorgeous October 26, tucked away on Askew Road, where baker Raluca (below) makes sourdough that’s so good, it’s wise to pre-order your loaf from her small batch bakes. Very San Francisco Mission District. 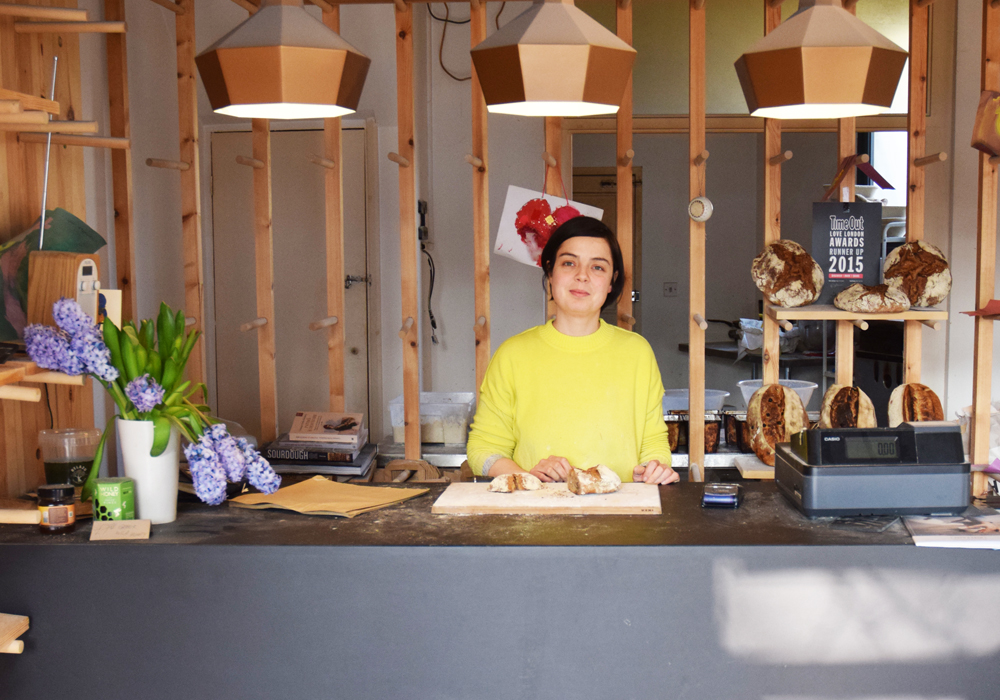 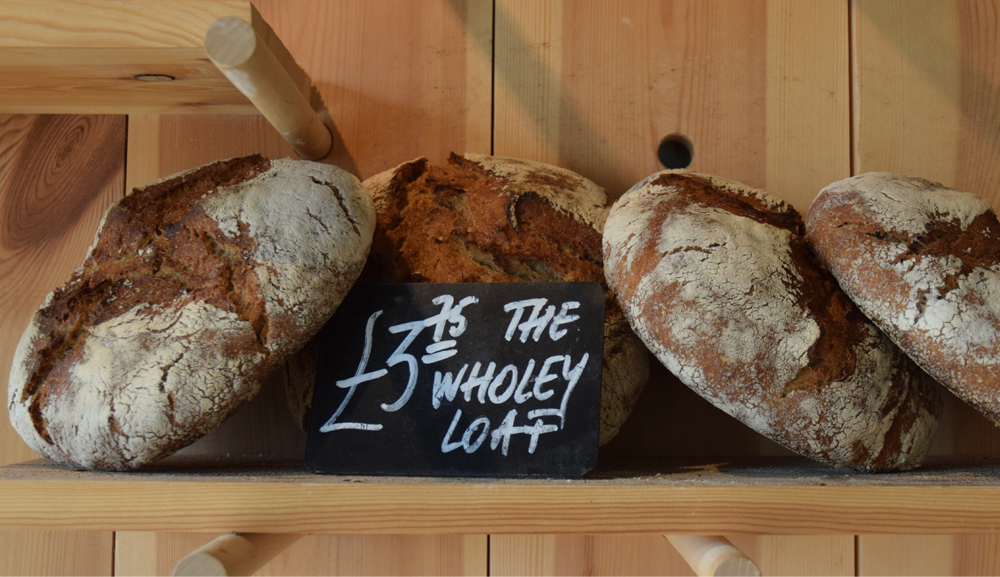 Or perhaps a Japanese bakery such as the tiny but delightful Happy Sky in Askew Road, where Japanese chefs makes delicious, preservative free breads and biscuits, including a yummy chocolate brioche, monster macha biscuits and even a brioche bun with yaki soba noodles inside….We love anything Japanese, they are even cooler than the Skandis. 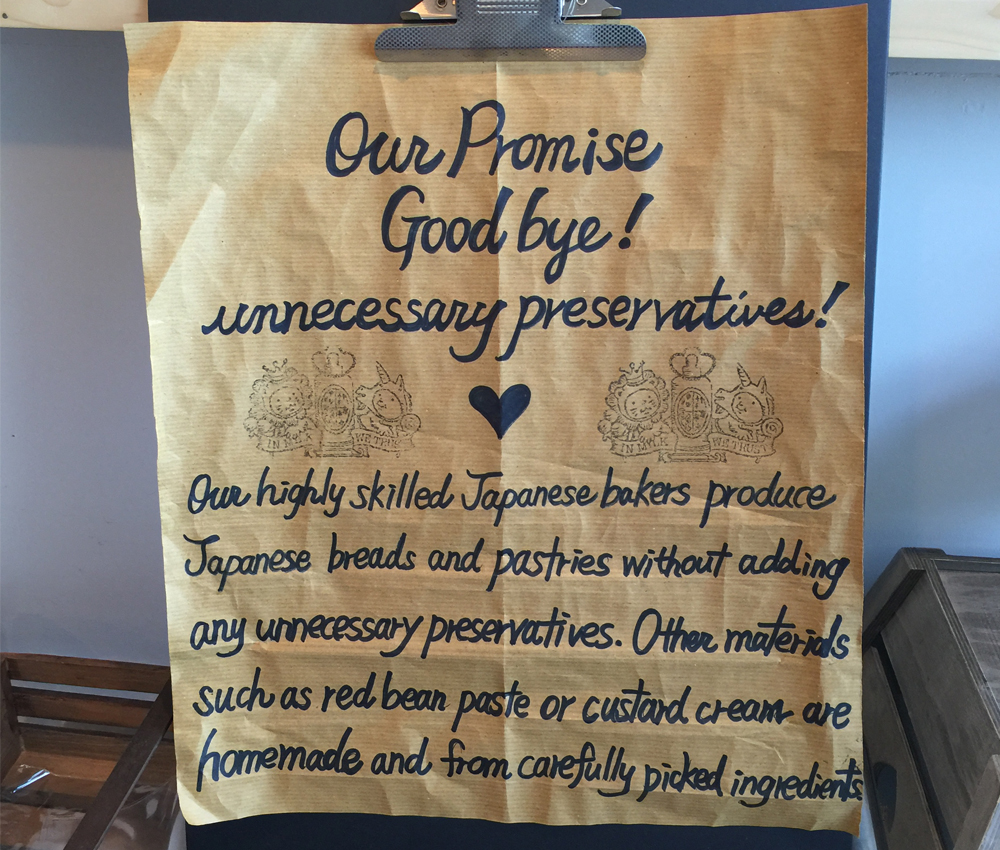 One of the hot new food trends is ice cream parlours. Well, Goldhawk Road has a frantically busy, just opened, Icelandic one, Bears Ice Cream Company, serving traditional Icelandic, soft-serve ice cream, which is made on the premises. The wickedly decadent trimmings to dip your cone into -such as that salty liquorice Skandis love so much -are all sent over straight from Iceland. It was heaving with parents and kids when we went -just as school was closing, where the reduced sugar campaign was on hold. Everyone needs a treat now and again. 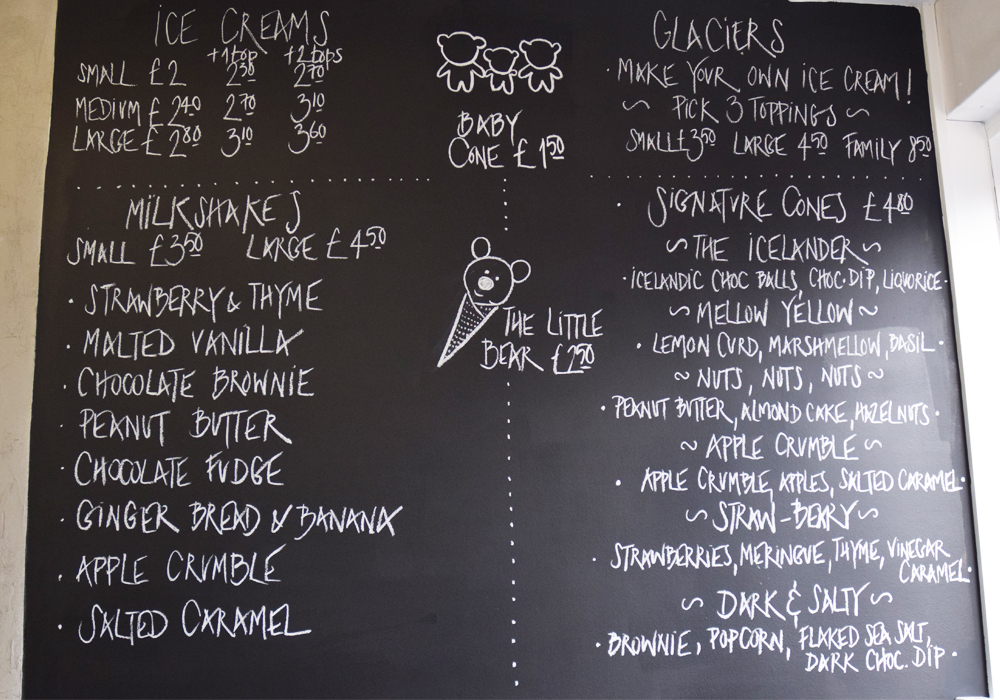 As we walked along the Uxbridge and Goldhawk Road area we saw many great new-ish eateries, positioned in between the Middle Eastern shops selling the best halva and vegetable stores where giant bundles of fresh herbs would put Tesco to shame.

Great pubs, such as The Pocket Watch, the Princess Victoria (with its excellent gin-palace bar, I shall be heading back here), the much loved authentic Sufi Persian restaurant and Mustard, the recently opened and fantastic looking bistro from the owners of Joe Allen’s (we can recommend the excellent Negronis).

Julia booked us in for supper at Market Yard, an experimental pop-up kitchen concept underneath the Market Arches, where Foley’s restaurant is currently test-driving its menu for a new restaurant (opening later this year). Next month it’s The Dough Boys and their interesting pizza. Foley’s was delicious, the cornflake crusted chicken was a winner, although they were a little over anxious to whisk away our plates (you get a two hour food slot). 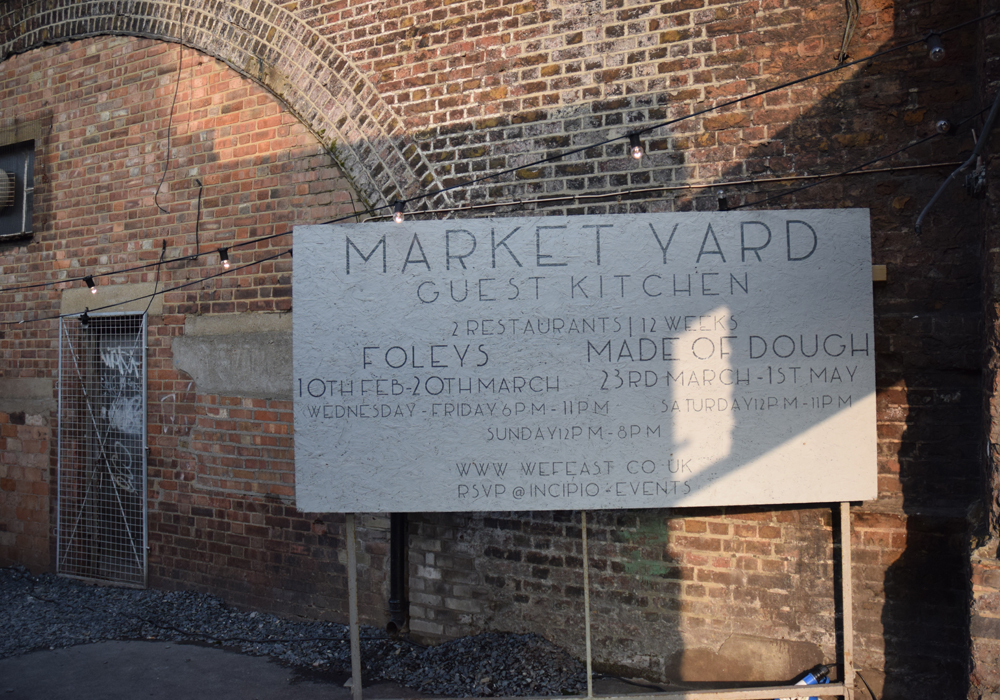 So in terms of food, Shepherd’s Bush certainly shows SheBu-Shoreditch promise. But what of the creatives? Or clothes? 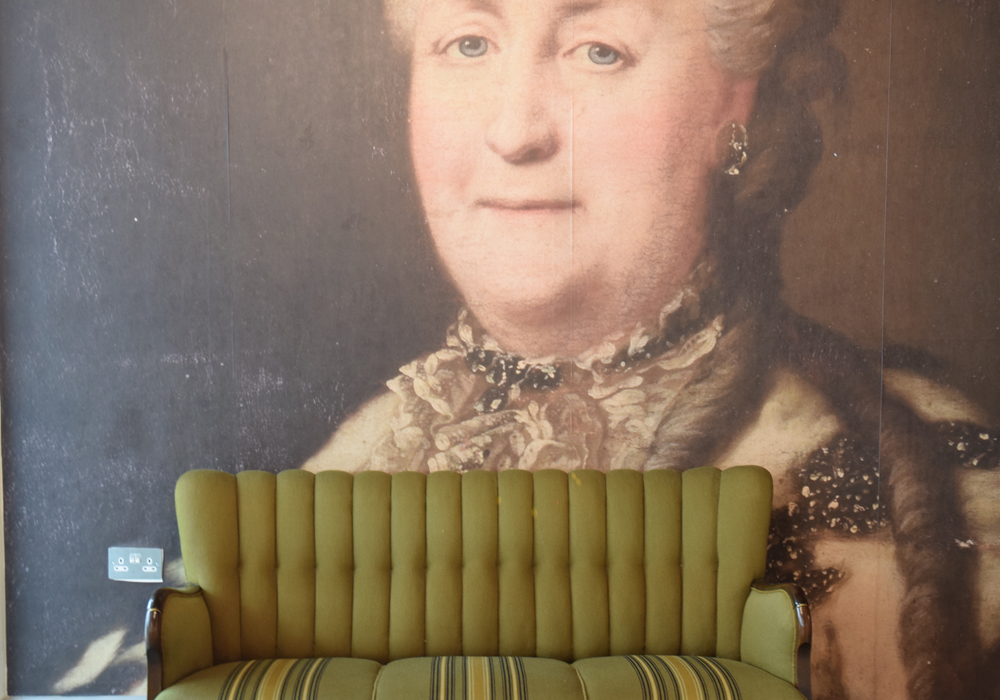 The best (actually only) concept we found was Petit Miracle, a creative hub for budding entrepreneurs to rent -very cheaply- space from which to run workshops, sell clothes, make furniture or simply base their new idea. Situated in the West 2 Shopping Centre, a retail space now all but neglected due to the behemoth that is Westfields, Petit Miracle aims to be an incubator of new retailer entrepreneurs. 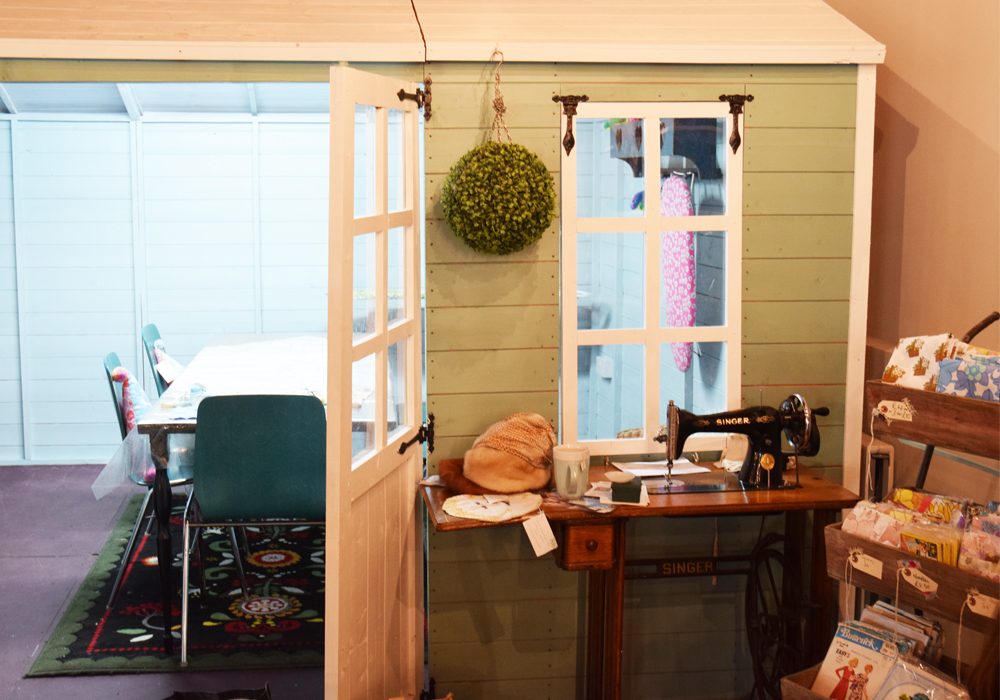 We loved Make Thrift London, where owner Daisy runs sewing workshops in her cute shed space within Petit Miracle, sells great vintage clothes and offers a Goldhawk Road fabric shop tour, where she guides you through the huge number of fabric stores in Shepherd’s Bush Market (where you’ll probably bump into the designers from Strictly, who buy all their fabrics here). Contact her to learn more. 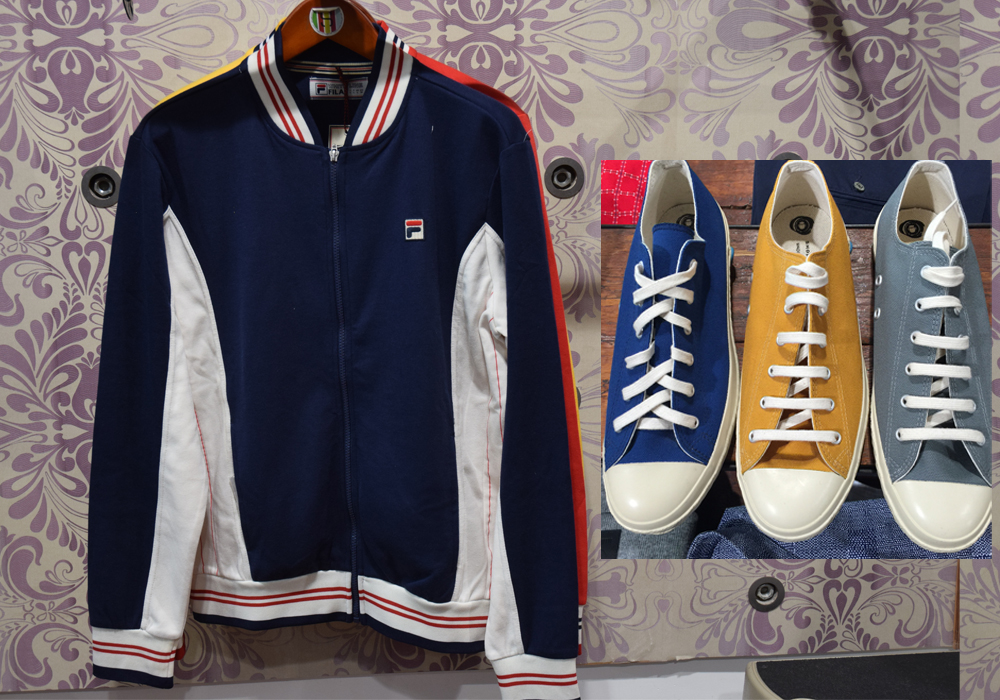 There were a few good menswear stores -of which well established Stuart’s is the very best, selling stylish clobber to Terrace Boys and stylish SheBu gentlemen alike. We also found Shoes Like Pottery here, a Japanese sneaker brand in great colours. 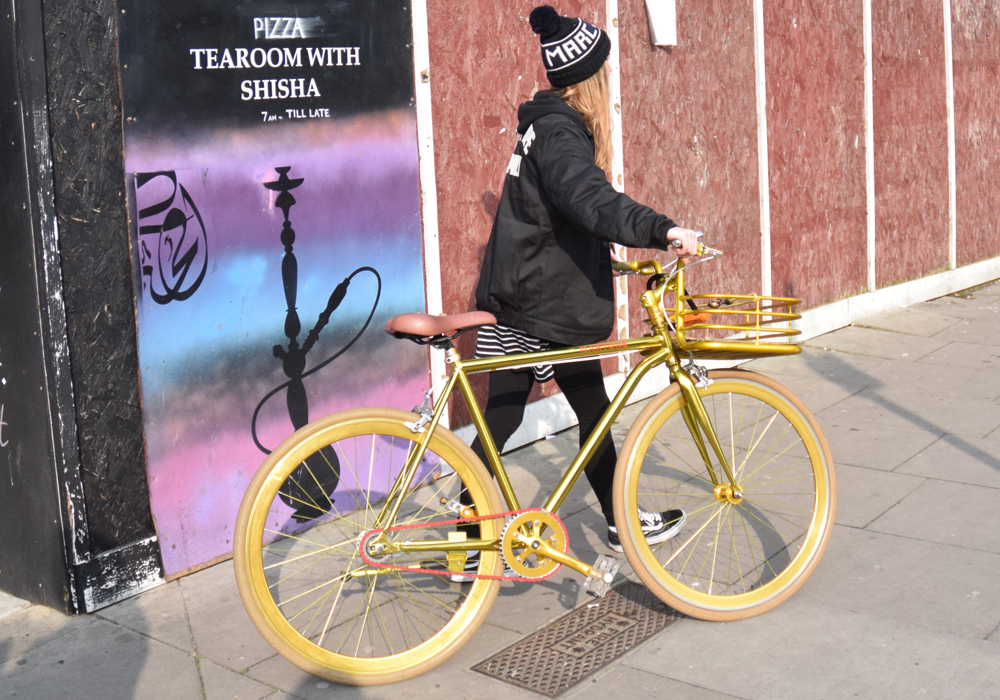 And we saw a bit of  hipster-ish dressing, with the mandatory luxury bike…. 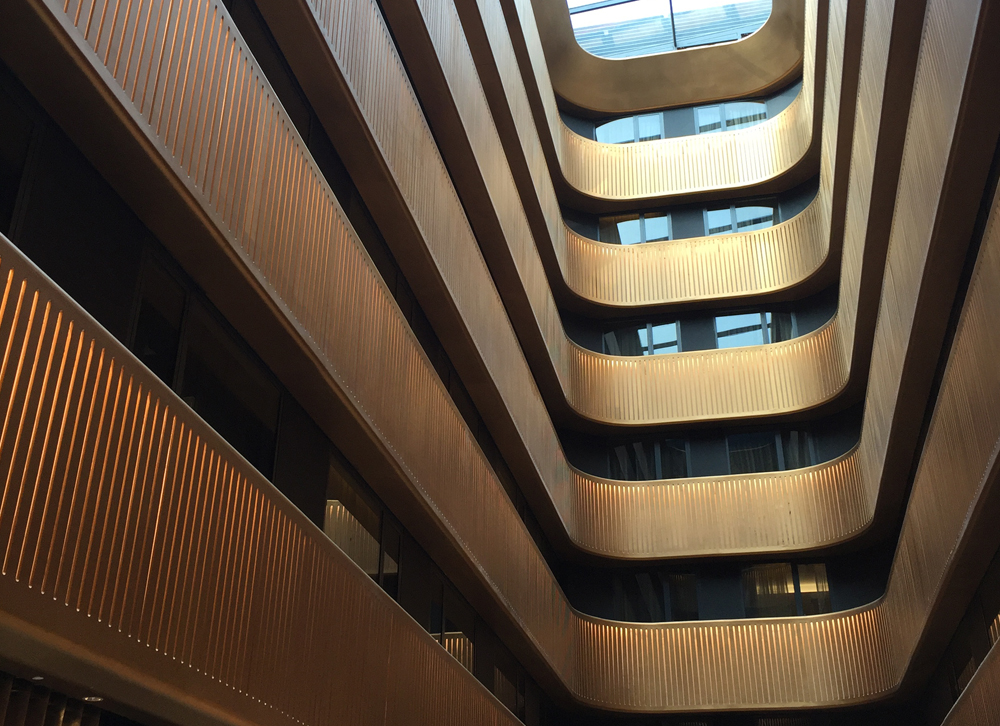 Phew. So things are happening. But in our view, it’s all about gentrification rather than a creative hub. It might well be the new Notting Hill or Chiswick in a few years time, but East it ain’t. However, it is fabulous, and definitely worth a visit.

While we are talking all things Scandinavian (see Monday’s post) we haven’t quite finished with Denmark.  Recently the Danish company A Sort Of Coal…