When I finally got to meet Jenny Eclair last week (at a JD Williams ‘do’) after years of Twitter chatter between her and us, she greeted me with “Your blog is a joy!’

She is officially the funniest, smartest and generally all round best person in the world for that nice comment.

I was a touch anxious about meeting because I really love her, she makes me roar with laughter and you know what they saw about meeting people you’ve put on a pedestal….

However, I’m thrilled to say she didn’t disappoint. We caught five minutes together before she hosted the launch of the excellent new JD Williams film, The New F Word (more on that in a second), so I asked for observations on being a hard gigging, grown up woman on tour…

Jenny: “I’m head-to-toe JD Williams tonight and may I recommend, for this season, JD Williams pleated palazzo trouser? they are a little bit Izzy Miyake and are very forgiving. I had to roll them up at the top because I’m a bit short and I’m not sure if you can actually take up pleats…”

Me: ‘Life is too short to take up pleats. But you look great in them.”

Jenny: “Thank you very much.’

Me: “We love your attitude to ageing…”

Me: “Ha yes! I wish I’d caught the Fifty Shades of Beige tour you’ve just finished, which sounded exhausting. I’d like to know what it was like traveling with your two other Grumpy Old Women, Susie Blake and Kate Robbins.”

Jenny: “Everyone who does Grumpy is over 50, that’s kind of in the rules. It used to be forty but it’s shifted on a bit as I got older. I’m team captain and I like to surround myself with older ones, Susie Blake was the oldest on this tour, she’s 66 and Kate Robbins is a year younger than me, but to be honest, her age is a bit muddy…

It was a bit like Spinal Tap meets some kind of geriatric care home. We’re all quite good at gigging and touring, but Kate is terrible with directions, she disappears off into those service lifts in hotels and instead of going up, goes down and ends up in the basement kitchen, always being found by Korean chefs who have to lead her out the long way round….She’s also the worst at leaving things in the back of cars.”

Me: “You had a driver, that sounds very glamorous!”

Jenny: “We have a driver because we’re covering huge amounts of miles and we share a bottle of chardonnay after each gig, that’s the rule. None of us would get into a car driven by any of the others post 10 pm, because a sober breath is not drawn.”

Me: “You seem to have loads of energy on stage, what tips do you have on being active as you get older.”

Jenny: “The afternoon nap. I’m a huge believer in the afternoon nap, I’m barely conscious during most of the day, when I’m performing I do a lot of lolling and a lot of little activities that can be done from the bed, such as a tapestry.”

Jenny: “It’s dead easy and you get something done. Then you take it to the charity Fine Cell Work, run by prisoners and they make them up into cushions. I’m meeting Susie on Monday because we’ve both got a finished tapestry, and we’re taking them in to be made into cushions. It’s not cheap, around £60, but they take your canvas, stretch it a bit and put them on very nice linen, not musty-dusty velvet, and make a lovely job of it.” 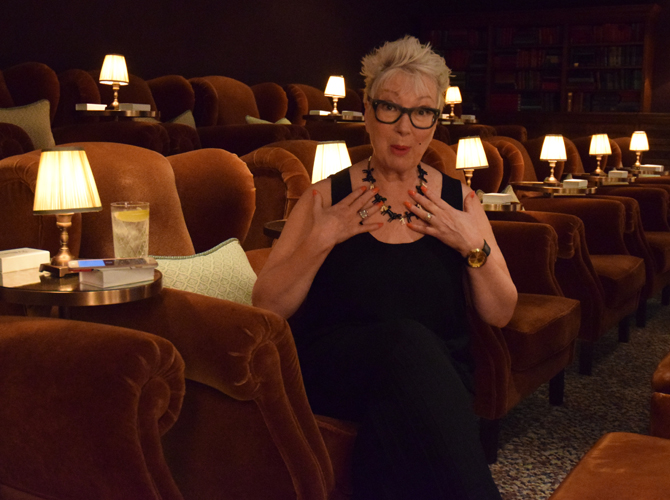 At this point I quickly took Jenny’s photo in the comfy Soho House screening room, the lighting was dark, hence the slightly grainy, night club vibe….

Jenny: “Are my dogs the right way round? Can you see they are dogs on the necklace? They are poodles and dog-bones. I picked it up in Barcelona.”

Jenny’s main job for the evening was to introduce the inspiring, real-life women JD Williams have recruited to star in the video, The New F Word, for its Autumn range.

Now, you know that Jane and I have been doing this fashion malarky job for a long time. Experience has made us a teeny bit skeptical when it comes to fashion advertising campaigns, but reader, this one really inspired me.

Jenny interviewed the women involved, from Joyce and Adrienne, who ride motor bikes everywhere, Dilys Price, who is the world’s oldest sky diver (she took it up at 58 and now teaches youngsters how to do it), to my favourite, Sian Griffiths who was one of just five women London firefighters and I bet was a super-inspiring boss.

Regular readers may remember Bridget (below) from the Channel Four documentary Fabulous Fashionistas. She’s still in fighting shape and looked stunning in the JD Williams metallic gold sun-ray pleated gold skirt, the sequined edge-to-edge jacket and gold trainers. She is wearing the black lace sweater underneath. 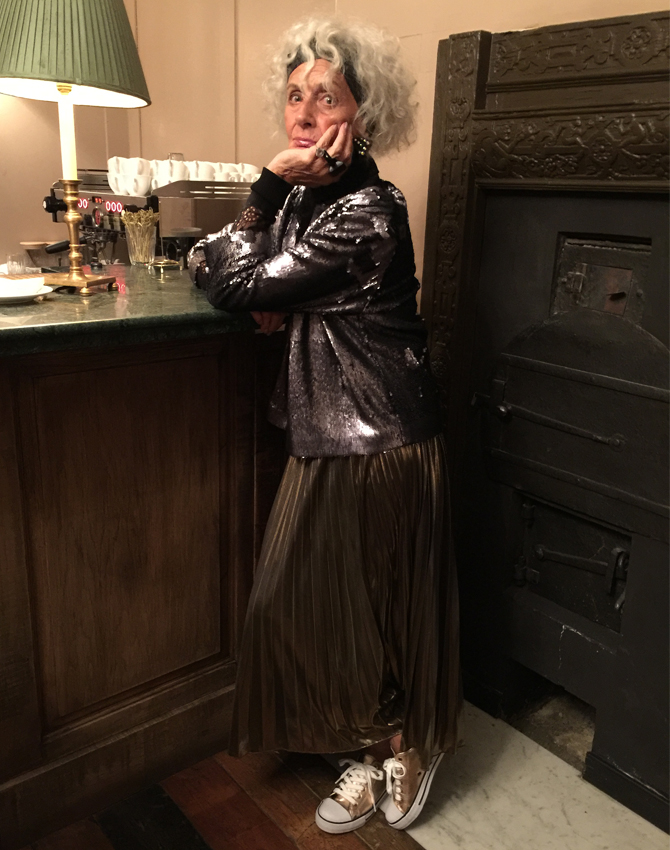 It was a great evening, and the Q&A with Jenny and the models turned into an uplifting and, at times, really moving event. I think JD Williams should take it out on the road around the UK. Jenny could give them tips on how to survive. Do watch the video and see what you think.

“I started working in a size 18 font, which is two sizes bigger than my knickers.Now, a year ago my font size and my knicker size matched, I’ve now decided that my eyes have deteriorated faster than my arse.”

“There are some funny old side affects on becoming a woman of a certain age, firstly I’m hot. Hotter than Beyonce. Hotter than one of those patio heaters they have in pub gardens, which, incidentally, are really bad for the environment, they should get rid of them and employ a load of middle-aged women instead. We could hang out in the pub garden and exude more heat than the earth’s core.”

If you fancy seeing Jenny’s excellent How To Be A MiddleageWoman tour, check out available dates here.

The only things you really need to know about (if you care) for resort 2013 are colour, pattern, the 70’s and possibly culottes! Florals…