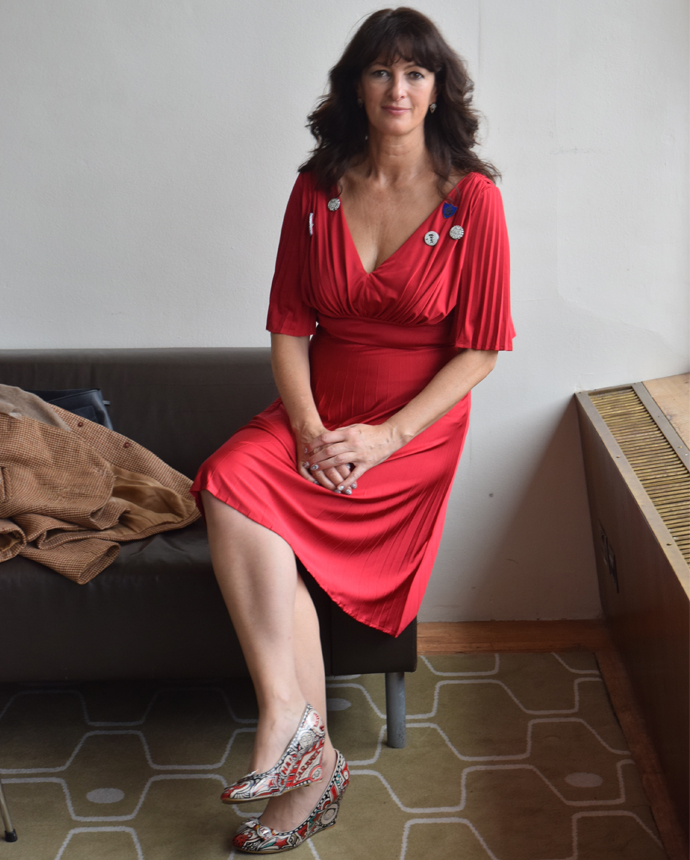 I knew I was going love children’s book author and illustrator Liz Pichon when I found out her favourite kids TV programmes had been The Double Deckers and The Banana Splits. They were mine too. She also loved Vision On, Magpie and Blue Peter and when I met her last week at the Royal Festival Hall, where she was about to go on stage with Children’s laureate Chris Riddell, she was proudly wearing her Blue Peter badge.

If, like us, you have older kids, you may not know about the amazing success (2 million books sold and counting) of Tom Gates, written and illustrated in Liz’s charming and accessible style. We don’t really do kids stuff here, but it’s not so much Liz’s award winning books that caught my eye, but that her success came later in life. She is a real inspiration to chat to, full of fun and she clearly really loves what she does. I found her enthusiasm and down-to-earth, can-do attitude very uplifting.

Liz is dyslexic, and despite being enthusiastic and chirpy as a kid, struggled academically at school. She became an illustrator, got married, had a son and worked on a random collection of jobs, from designing album covers for Jive Records to towels for Marks & Spencer. Life pottered along.

In her late 40s, she decided she’d had enough of doing paid jobs and thought maybe she had a good idea for a kids book. She made it funny and colourful and it took her around two years to complete because she’d never written anything before in her life. On submitting it, she got offers from seven publishers in two weeks, and now she’s one of the most successful kids authors around.

I caught up with her for some inspiring tips on taking the plunge at 46 years old to do something different. 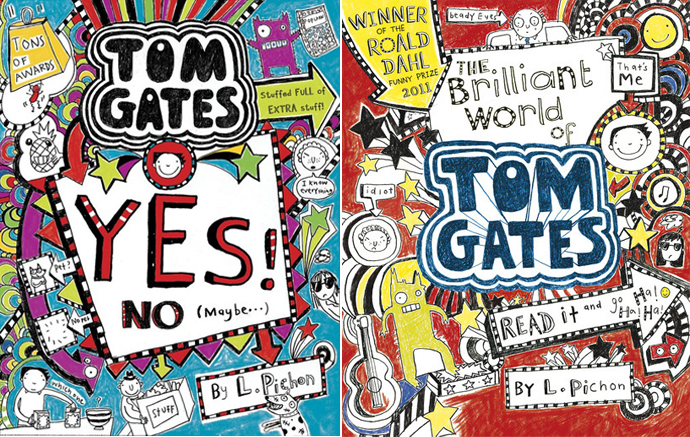 Liz, did you secretly always have a desire to be a successful book author?

No! Honestly, it couldn’t have been further from my mind. I’m dyslexic, sparky and enthusiastic but rubbish at maths and spelling. I’ve got an appalling memory too, although I can remember song lyrics no trouble at all!

I liked comics and drawing and my mum was very creative, she always had a project on the go and was really into her crafts, she was either sewing or crocheting something, or making patchwork quilts or scrap books or pressing flowers, all that kind of stuff.  There was always something happening around the house and I loved it but the thought of making a living from it didn’t ever cross my mind.

Do you think you needed to be older to have the confidence to do something different?

There’s never a right time for anything and I never really had a plan. I had my kids early, I was 26 when I got pregnant and we were still sharing a flat! Nothing was really carefully worked out, but we had to get practical fast.

As a freelance illustrator I did absolutely everything, I did a lot of juggling around the kids, but you just do as a mum don’t you? I was drawing around the day…I’d get up early or work late. I just got on with it. Having kids does give you constraints, but they have a certain timetable, so I became very focused on making the work fit into the time I had. My husband, who’s a musician, was brilliant and we’d work around who had a job on, When I look back, I sometimes  think ‘I wouldn’t do that again,’ but you don’t know any better at the time.

What made you decided to take the plunge and do something for yourself?

I spent a lot of time doing jobs for money, illustrating picture books, which was totally fine, it was great to have the work but it wasn’t interesting. I got to a point where I felt I could do with a change, but you can’t sit around waiting for the perfect job to land in your lap, because no one knows you can do it. So you have to create a piece of work that shows what you can do.

So for Tom, I wanted to write a funny book with lot of creative things in it. I sat down and wrote in an exercise book as I imagined Tom would write it. My son is severely dyslexic and he had this brilliant teacher who would write really funny comments in the margins of his books, I used to love reading them, they were hilarious. So I put that in, and I remembered the scrap books I made with my mum and the comics I used to love, lots of drawing, it all went in. I had no idea how to write, but I just did it. 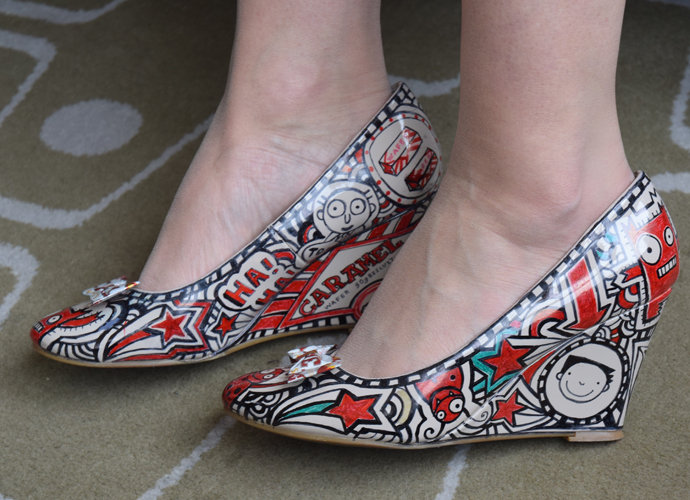 And it was a big success! How did that feel?

Children’s book publishing is lovely, but I didn’t know how anything worked, so I feel I’ve been learning on the go. I felt a fraud at first and I felt like I wasn’t good enough..I was on a stage at World Book Day with Francesca Simon, who I think is brilliant, and I wondered ‘what am I doing here?’ But having success has made me a bit bolder. I’ve got a good sense of what works and I do stuff automatically and because Tom was quite successful from the beginning, I was left alone to do my own thing.

I’ve worked with lots of different people because there’s a lot of movement in publishing, it’s like doing your A levels when the teachers keep changing, but I’ve learned you can take something from everyone. And I just enjoy it all, it’s so fantastic to be doing this job and to be in this world, I make sure I really enjoy everything.

If something scares me or pushes me out of my comfort zone, I find a way to make it work, you have to be brave and throw yourself into it. Like the events, where you have to go on a stage in front of lots of people and kids. They are huge in children’s publishing, but the first time I did a Tom Gates event, my hand was shaking so much, I had to put my pen down, I was terrified!

I realised that to make a connection to the kids, I needed a prop. Often the first thing they see when I speak to them is my shoes, as they’re usually sitting on the floor, so I drew all over my shoes -I got a cheap pair for a tenner from Primark and coloured them in with a sharpie. I draw on my clothes too, and nails and earrings, it’s such fun. My drawing style is very easy for kids to copy and they love that. This really is the nicest job, and parents are just thrilled their kids are reading. 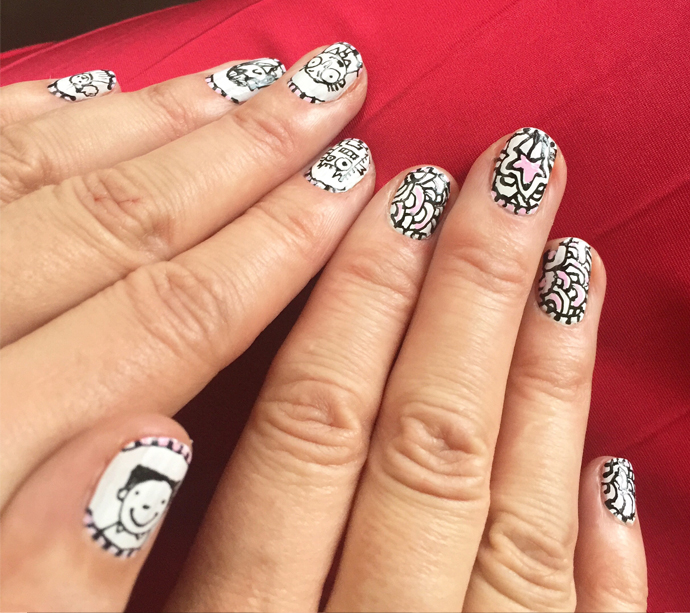 I urge you to check out Liz’s website, which is a blast, to find out more on her and the wonderful books she writes, even if you are a grown up. Roll on grandchildren, is what I’m thinking….

We are fortunate today to have as our guest blogger Benson, a handsome golden retriever who has just written a useful guide to dog…