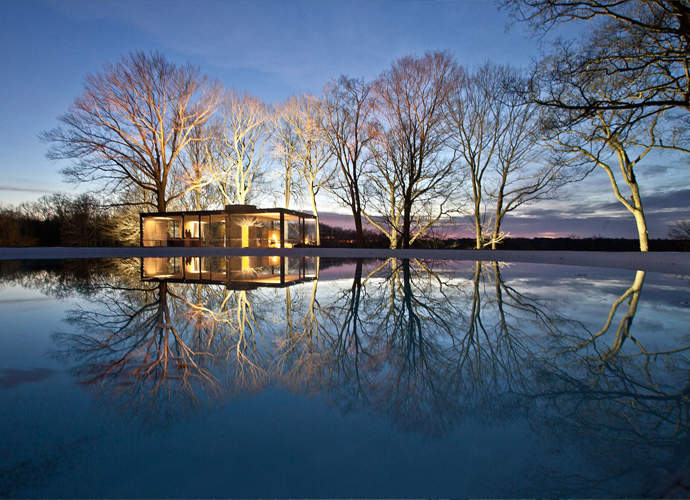 Guest blogger Elena Bowes is turning into our roving art reporter this month, do read her recent post on art in New York if you are planning a trip soon. Today she’s ventured further afield for more cultural kicks.

New York City doesn’t mess around. It’s urban with a capital U. You want laid-back, go somewhere else. But what if you love New York City and at the same time crave a little space, oxygen or green? Not a problem.
I recently spent a weekend in and around New Canaan, Connecticut and discovered there’s a whole leafy, art-filled world an hour outside of  bubbling, buzzing Manhattan. Here are my top tips for a day or a weekend beyond the Big Apple.

Legendary American architect Philip Johnson’s modernist Glass House is a must-see, as well as the 13 other stunning structures on the 49-acre compound a mere 50 miles from New York City. Lived in by Johnson from 1949 until his death in 2005, the glass and painted steel pavilion is mesmerising in its zen simplicity. 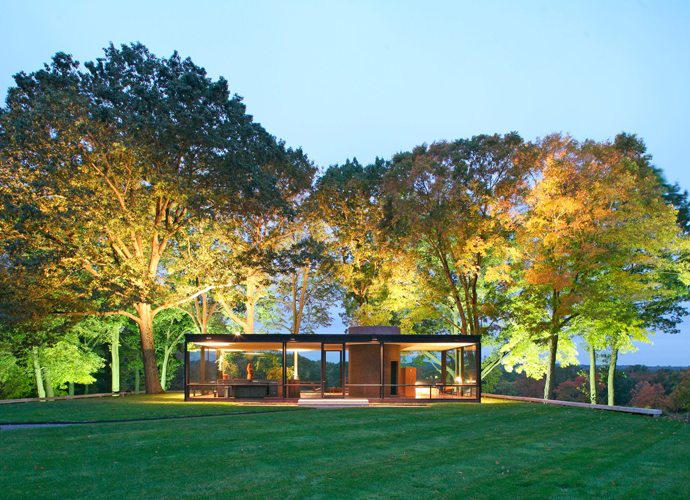 With 360 degree views and a central fireplace that divides the space, the cube shaped pavilion looks just as contemporary today as it did when Johnson built it nearly seventy years ago. The house sits on a knoll overseeing a pond and some woods beyond. Nature is everywhere. Add the possibility of a roaring fire and nirvana meets colonial New Canaan. 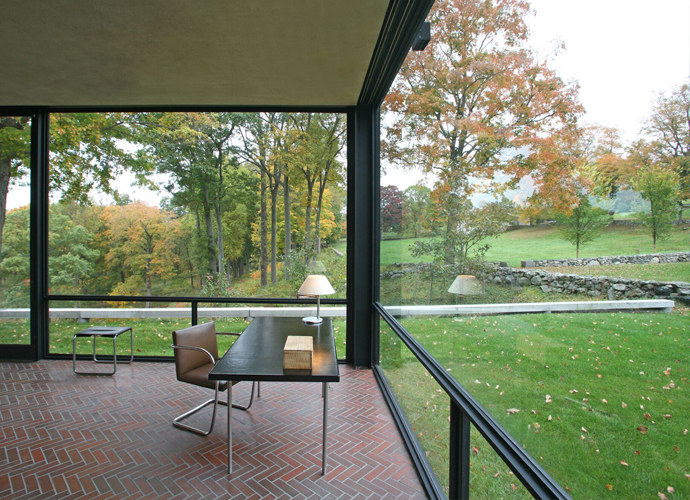 Johnson reportedly said: “(The house is) more of a landscape than it is a work of architecture. It’s more a memory of the English parks of the 18th century, which are called English gardens for some reason.” Most of the furniture came from Johnson’s Manhattan apartment and is designed by Mies van der Rohe. Be sure to book a tour on-line (weekday tours are less busy) and experience firsthand what a visionary Johnson was. “It’s the only house in the world where you can see the sunset and the moonrise at the same time, standing in the same place,” Johnson reportedly said.
Beyond the house there are several galleries to peruse. Alongside the permanent collection of 20th century painting and sculpture are the temporary exhibitions; This summer’s special guests are Julian Schnabel and Robert Indiana. The Painting Gallery is exhibiting a rotation of works by New York painter Schnabel, the most represented artist in the collection after Frank Stella. 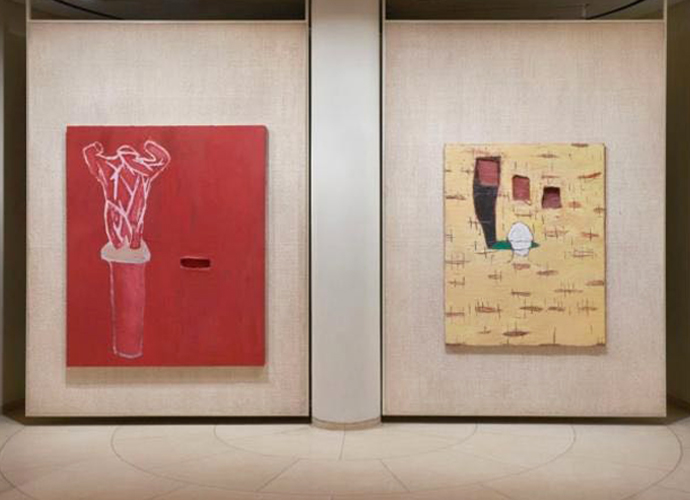 A wood sculpture by Schnabel … 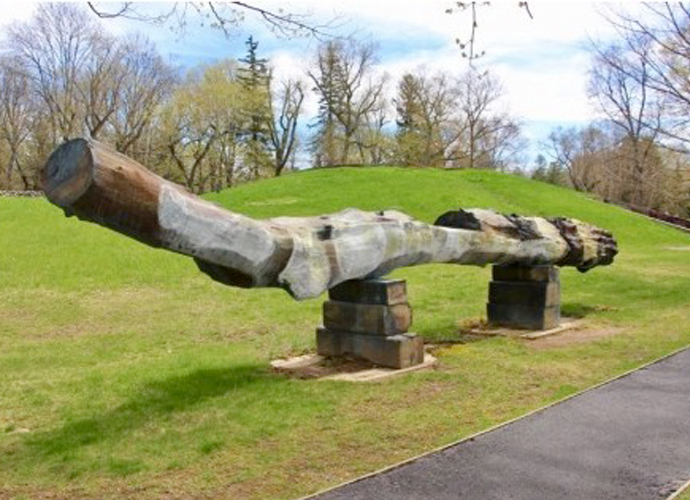 I met with the Glass House’s Christa Carr at the airy Sculpture Gallery. Carr is knowledgeable in all things arty, as well the important stuff – like where to sleep and eat in the hood (see below). Below is the eye-catching gunnite Da Monsta building, where Johnson was influenced by artist and friend Frank Stella. 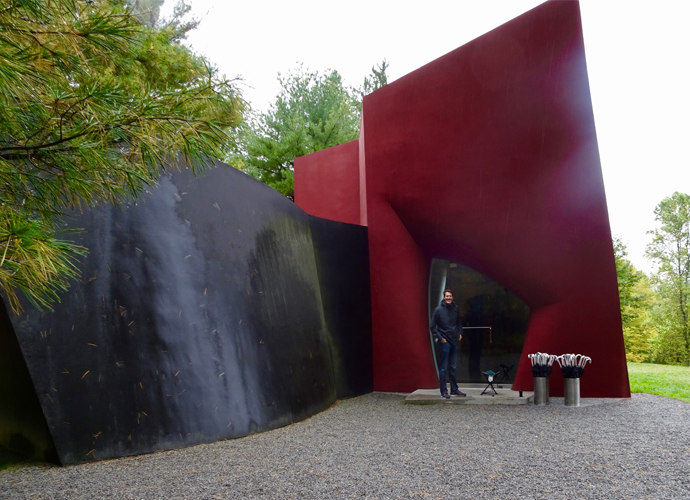 New Canaan is an easy train ride from Grand Central. The Glass House and surrounding 49 acres is open from May through November, everyday except Tuesdays and Wednesdays. Visitors are picked up from the Visitor Center (handily located across the street from the train station) and driven to the nearby Glass House. Stop in at the Design Store adjacent to the Visitor Center. It’s full of novel objects., like these Carl Aubock brass paperweights. Be sure to take the fast train from Grand Central to New Canaan which takes just over an hour compared with the slower Amtrak one. Despite the train’s ease and convenience, I recommend renting a car because there’s so much to see in the area. Check out another exceptional glass building; The River at Grace Farm is an undulating 83,000 square foot glass structure on the expansive nature conservancy designed by Pritzker Prize-winning architects SANAA. 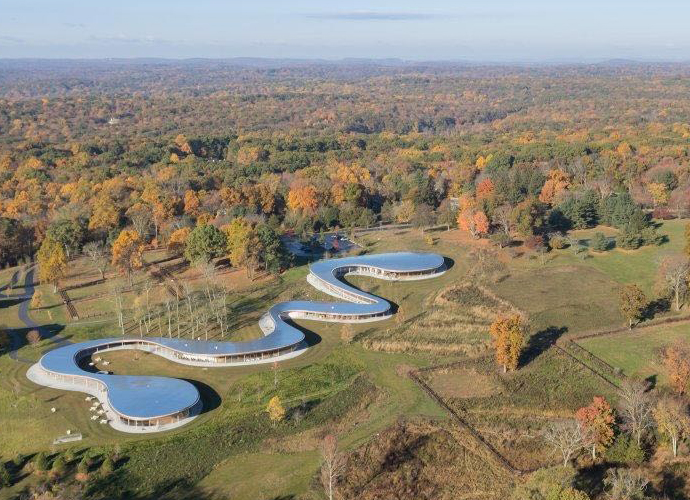 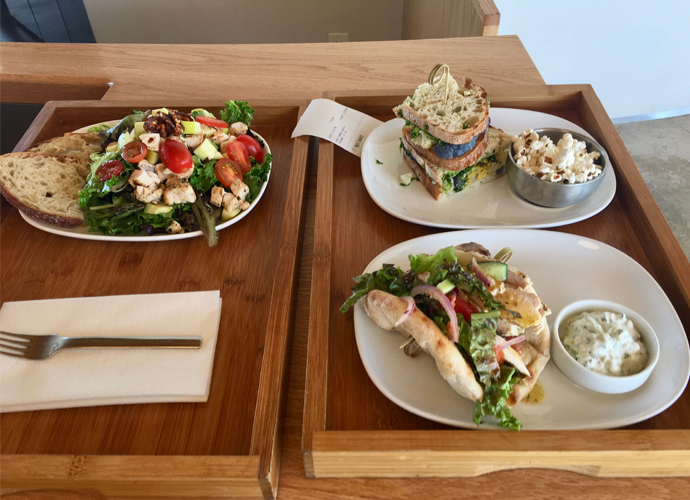 Another stop on the cultural Connecticut map is the Aldrich Contemporary Art Museum in picturesque, historic Ridgefield, a twenty minute drive from New Canaan. Founded by Larry Aldrich in 1964, the Aldrich is the only museum in Connecticut dedicated solely to contemporary art. Interesting fact: Philip Johnson attended the first board of trustees meeting in 1964 (small world).
The Aldrich allows artists to try out new things outside the fishbowl of NYC. (Almost like off Broadway – Broadway). The museum is currently showing four artists whose work is loosely linked with text. Tony Matelli’s bronze Sleepwalker sculpture was an internet sensation three years ago when it appeared on NYC’s Highline… 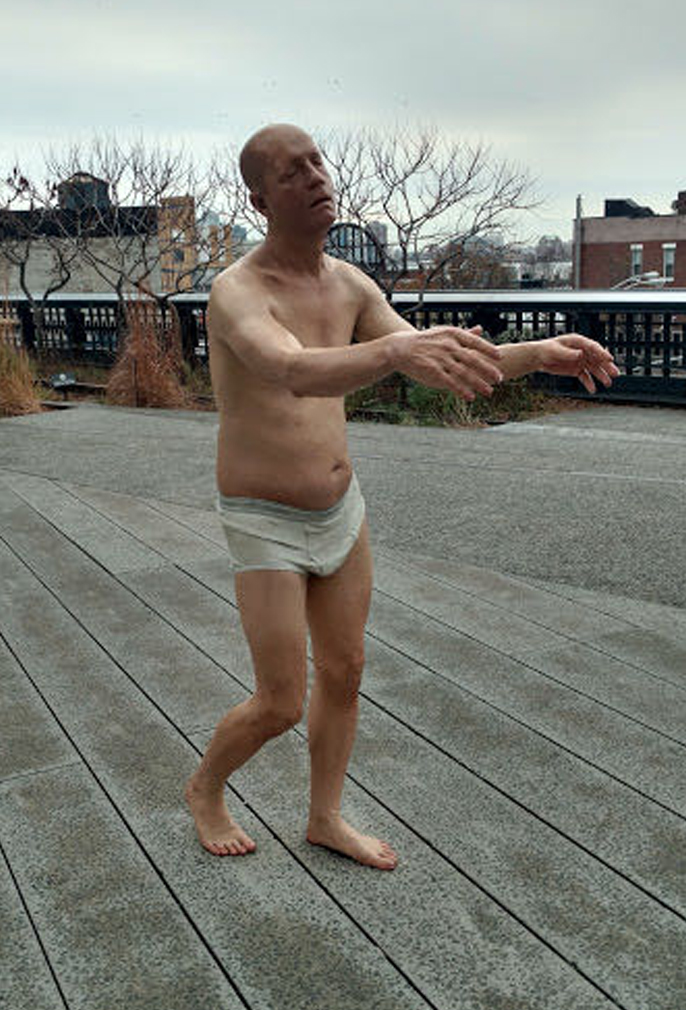 Here’s his latest sculpture unveiled recently at the Aldrich. 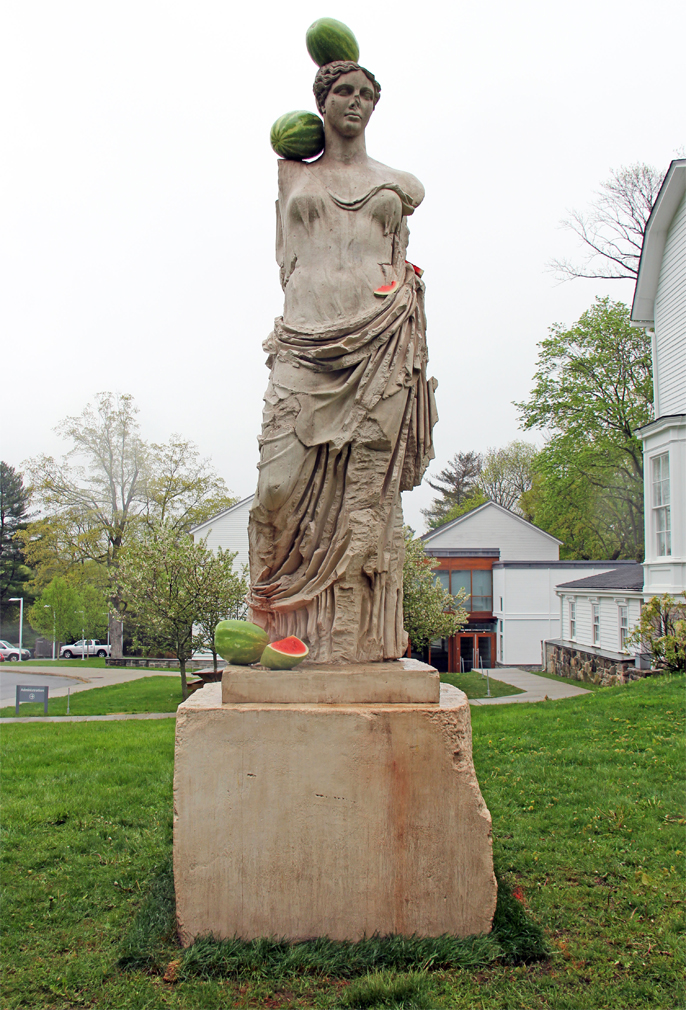 And if your thirst for the arts is still not quenched, a bit further afield is the Brant Foundation Art Study Center in Greenwich and Yale University Art Gallery in New Haven. 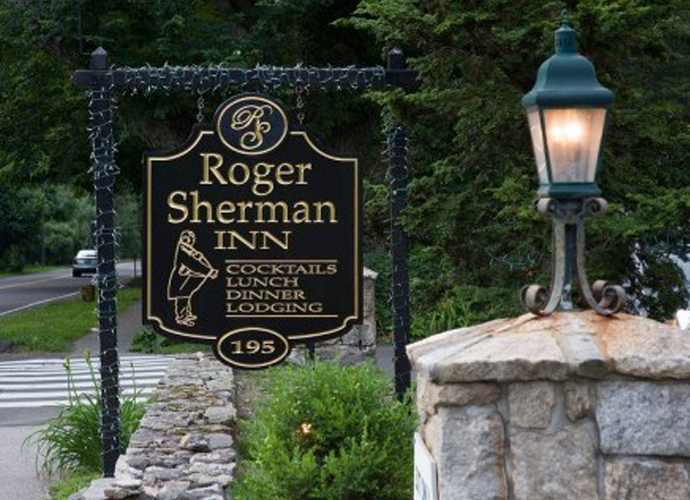 Crista Carr recommends staying at the Roger Sherman Inn, “Its owned by a French man so the food is delicious, real French food,” says Carr, whose mother is French. Other local restaurants Carr likes are Elm and Solé, both on New Canaan’s Elm Street, just off of central Main Street. Bon voyage!

In our ongoing quest to find shops we’d like to move into, we’re adding the New York SoHo store of Jonathan Adler to the…