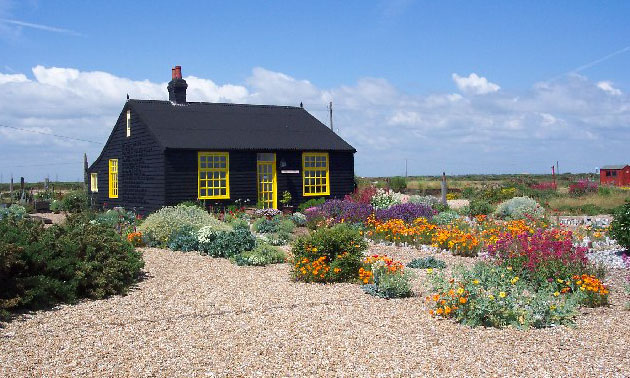 I have had a fascination with Derek Jarman since a friend who owned an old railway carriage in Dungeness, told me about his interesting artist neighbour, who had a fabulous garden.  Regretfully I never got round to visiting my friend’s bolthole and meeting said neighbour. Years later, as my fascination with artist , writer and film maker Derek Jarman grew, I realised what an opportunity I had missed.
I made a trip to Dungeness last weekend and was reminded how much I love Derek Jarman and his work. His simple house and amazing garden are still in perfect condition and didn’t disappoint. The bleak desolate landscape, with huge nuclear power station looming in the background, is peppered with interesting shacks and houses and lovely ramshackle gardens, which are unique and inspiring.

Derek Jarman’s work was both experimental and ground breaking and he made what is thought to be the first ever Uk punk film Jubilee in 1977. Featuring Queen Elizabeth I, who is transported forward in time to a desolate and brutal wasteland ruled by her twentieth century namesake, it showcases key figures from the punk scene, such as Wayne County of Wayne County & the Electric Chairs, Jordan, Toyah Willcox, and Adam and the Ants.
Jarman was also one of the first British film makers to feature positive images of gay sexuality, in his 1976 film Sebastiane. But be warned, the dialogue is in Latin, so don’t bother unless you are a real fan!

The 80’s saw Jarman make his most widely known film Caravaggio and one of my favourites The Last of England, which tells the story of the death of a country, ravaged by its own internal decay, due to the economic restructuring of Thatcher’s government.

By 1993, Derek was losing his sight and dying of aids related complications and made the amazing film Blue. Shown on Channel 4, the film consisted of single shot blue screen, while Jarman described his life and vision and an original soundtrack played simultaneously on Radio 3.  It sounds pretentious, but it is one of the most moving and compelling things I have ever seen.

Jarman lived out his last days at Prospect cottage in Dungeness, tending to his beloved garden, and his final book Garden, is a fitting memorial to this breathtakingly beautiful place. His Autobiography Modern Nature is also fascinating.

A new exhibition at the V & A starting on September the 24th, Postmodernism: Style and Subversion 1970-1999 will bring together over 250 objects across all genres of art and design, revisiting a time when style was not just a ‘look’ but became an attitude, and will feature some of Jarmans work.

When ever I visit friends and family outside of London I am surprised by how much they use their cars. They do it because…