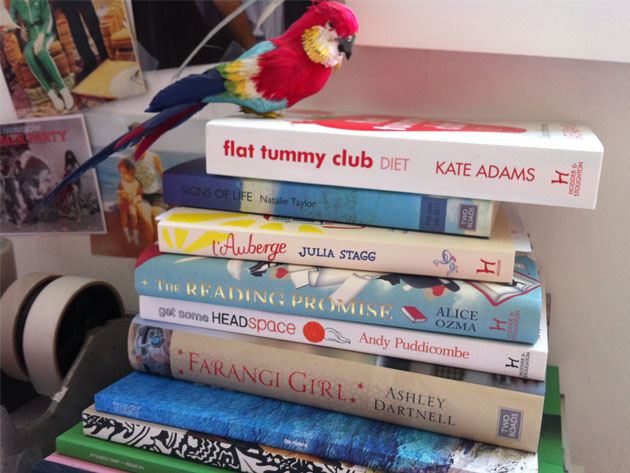 Since we decided to add more books to our We Are Reading, section of the site, we have been inundated with publishers sending us books to review. Much as we love reading, there are only so many hours in the day and we simply don’t have time to get round to reading them all.

We don’t like recommending them to you unless we have either read them ourselves or had them personally recommended to us, so here’s where you come in. You may have a holiday coming up, or need a new book for your commute to work, or simply have a lot of time on your hands? If this sounds like you and you fancy writing a short review for us, leave us a comment.

Move over Oprah and Richard and Judy, this is the start of The Womens Room book club!

The books we have on offer are:

Get Some Head Space by Andy Puddicombe which promises to get people to take 10 minutes out of their day to sit in the here and now, using simple to learn, but highly effective techniques of meditation.

Signs of Life by Natalie Taylor a memoir based on the authors own story, which starts the day her husband dies and ends sixteen months later on her son’s first birthday. “A heartbreaking, blackly funny book which will move you to laughter and tears”.

L’Auberge by Julia Stagg is a novel set in the small commune of Fogas in the French Pyrenees which has been thrown into turmoil by the revelation that the Auberge des Deux Vallées has been bought by an English couple and not by the Mayor’s brother-in-law as had been expected. With everyone aghast at the idea of an English run restaurant and the certainty of gastronomic disasters, the Mayor wants to take revenge. Within hours of hearing the news, he has called an emergency Committee meeting and his plans to force out the new owners have begun.

The Reading Promise by Alice Ozama tells the story of Alice , who’s school librarian father made a promise to read aloud together for 100 consecutive nights. Upon reaching their goal it was clear that neither wanted to let go of what had become their reading ritual. They decided to continue what became known as The Streak for as long as they possibly could. Alice poignantly illustrates the unbreakable parent-child bond, the books they treasured, and the life lessons learned along the way.

Farangi Girl by Ashley Dartnell Ashley Dartnell’s mother was a glamorous American, her father a dashing Englishman who were trying to shake off their past and upgrade to a more romantic and exotic present in Iran. The story begins in the 1960’s as Ashley is eight years old and living in Tehran, the Shah is in power, life for Westerners is rich and privileged, but not quite what it seems. As the story unfolds, it tells of bankruptcies and prison, betrayal and lovers, lies and evasion and the relationship between Ashley and her passionate, strong-willed mother, Genie.

And one you may want to try if you are planning a holiday, or indeed ignore if it’s too late and your holiday is imminent is Flat Tummy Club by Kate Adams, which claims ‘healthy eating doesn’t require a depressing deprivation diet just sensible eating and motivational advice! Yeh right, we’ve heard it all before and we are not usually huge fans of diet books, but let us know if you fancy giving it a go?

Sent to the founder of the hilarious Awkward Family Photos blog on his wedding day, by his grandparents Kenny and Selma, who couldn’t make…