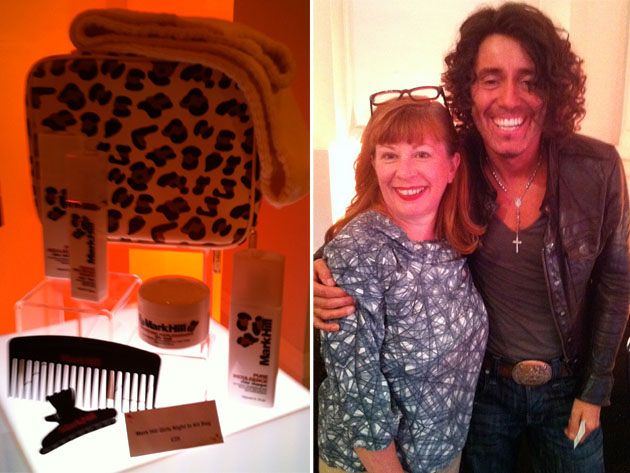 The Pamper Pack and me and my new best friend!

When Amanda and I were out and about ‘doing Christmas’ at press shows this week, we came across the rather fabulous celebrity hairdresser Mark Hill, who happens to be from the suburb of Hull where I spent my teenage years, so we immediately hit it off.
Mark was the first Northern hairdresser without a London salon to win the Hairdresser of the year and despite going onto win it again and having a super successful range of products in Boots, he is happily still based in Hull

I have come across his products before when teen daughter tries to get me to buy ‘designer’ shampoo in Boots – cue a tussle at the till, with me putting Head and Shoulders in the basket and her tutting and taking it out again. As I have said before I am not one for  believing all that stuff about beauty products that change you life – unless – I have a celebrity hairdresser from Hull telling me how to get Kim Kardashian/Patti Smith hair.

Mark Hill is fabulous is a way only a northern hairdresser can be (I used to hang out with a hairdresser called Slack, from Hull’s most glamorous salon, in my teenage years, so I should know!) and when he tells us we have to use his De-Frizz Shine and Control Spray before blow drying and tonging, then De-Frizz Texturising Polish to finish, I believe him.

To achieve the Kim/Chloe/Courtney big hair effect one also needs to his soon to be released range of *sharp intake of breath* Glam Rock velcro heated rollers. They are out in September and we think we need them in our lives. We also quite like the look of the Girls night in Pamper Pack (pictured above) for an indulgent treat.

Mark was charming and talked about his work and range with so much passion that I plan to employ him as my own personal hairdresser if I’ve won the Euro million roll over. Now where’s that lottery ticket?

I’m a bit over Twitter. Once it was where you’d go to find chatty, funny people avoiding deadlines and job lists by kicking the…