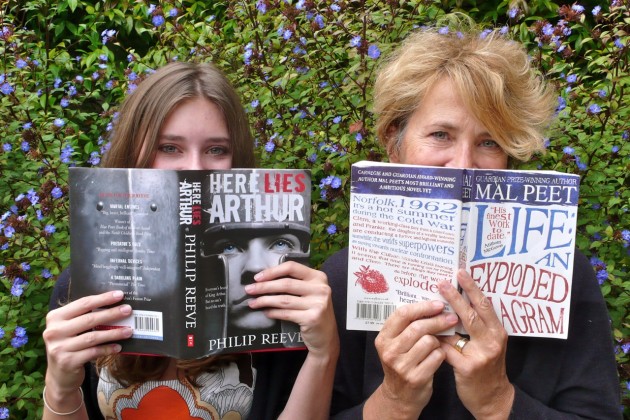 Ladybookbird is a gem of a blog reviewing books for kids and teenagers. It’s written by mother and daughter team Maudie Powell-Tuck, who has a weekend job in one of West London’s best Children’s bookshops, and Dinah Hall, interiors journalist and children’s book reviewer for The Sunday Telegraph, so they’re a uniquely experienced combo. It is both enlightening for parents looking to inspire their youngsters with a literary must-read and often snortingly funny on what parents say about their kids. We question the duo about how it all happened.

So, Ladybookbird, what’s it all about then?

M. There are lots of children’s books blogs but most are written by 21 year old paranormal romance obsessives, who are hopelessly in thrall to the publishers and whose reviews always start “I love, love, love this book”. We wanted ours to have a bit more bite to it so we were thrilled when Michael Thorn, who is the king of book blogs, called it “deliciously wicked”.

D. Stephen Bailey once said he couldn’t be friends with anyone who didn’t make their own chicken stock – well, I couldn’t be friends with anyone who didn’t read to their children every night. Children’s books have a talismanic power – they are more than just stories, they are bound up with emotion, culture and memory in a way that adult books aren’t. I’ve been reviewing for the Sunday Telegraph for twenty years but the bond Maudie and I have over books is rooted in her childhood and doing the blog with her is really special to me.

As a Mother & Daughter critic team, do you ever disagree on books? If so who writes the review?

M. We keep the peace by reading different books, but I’ve been conditioned to like the same as Mum as I was brought up on a strict diet of gritty social realism….

D. Which does not explain her abiding loyalty to Harry Potter. At times of stress I find them under her bed. She’s 22.

I really love Tales from Under the Counter, perhaps a book in itself? Are you holding back on the really wicked stuff there? Share a horror story with us….

M. This is why I work a six day week. I can’t give up my Sunday job at the children’s bookshop; it’s a constant source of amusement. Of course most of the customers are great (yes, hello Angelina Jolie….) but in the hothouse that is West London you are always going to get parents who want to read Shakespeare to one year olds. And the fanatics like the woman who asked for books for girls that showed ethnic inclusion but no boys.

Bridge to Terabithia by Katherine Paterson.

M Bread and Jam for Frances by Russell Hoban

A Gathering Light by Jennifer Donnelly

What are you both reading now?

M. Mister Creecher by Chris Priestley – if I was pushing it to helicopter mums in the bookshop I’d tell them it will get your kids interested in Mary Shelley and Dickens. But basically it’s what Priestley does best – utterly enthralling Gothic horror.

D. Naked by Kevin Brooks. One of the best British young adult writers, his latest thriller is set in the 70s and impeccably researched. References to Jordan, Andrew Logan and Malcolm McClaren may go over teenagers’ heads but I’m right at home in it.

There could only be one Weekend Woman this week, the amazing Jo Pavey, who has won a gold medal in the 10,000 metres at the…