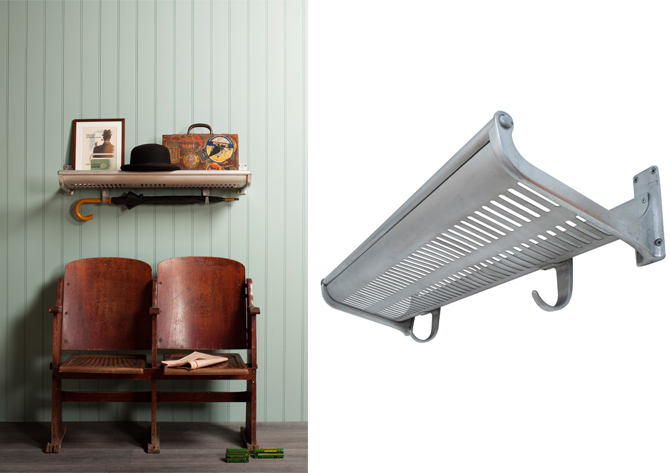 I live close to a railway line in London, where about once a week -more in the summer- we get a Pullman coach steam train whistling through, billowing cotton wool clouds of steam and chuffing nostalgically. It’s thrilling to hear it, I don’t know what it is about steam trains but the rhythmic sound of them approaching and then blasting by in a shoosh of noise including a loud toot as it goes through our station, is ridiculously theatrical and a tiny bit magical.

The cream and brown paintwork of the carriages makes me think of Enid Blyton novels, whicker picnic baskets those lovely illustrated posters of seas side towns you now only see on The Antiques Roadshow. If I’m looking out of a window in the house rather than in the garden, I can catch a fleeting glimpse of white tablecloths, silver tea pots and linen curtains at the windows. Teen sons also still love seeing it, growing up next to trains leaves a lasting impression.

Now, having led you on with this romantic notion of 40s and 50s rolling stock, the refurbished vintage luggage racks (above) recently acquired by London Transport, are in fact NOT from anything as glamourous as The Orient Express, but are from the decommissioned Metropolitan line A stock trains from the 1960s. However, they are extremely lovely and light too as they are made from aluminium, and will have a place in the heart of Metropolitan line commuters who may remember Amersham/Chesham to Baker Street trips fondly. Although it is the tube, so this image might backfire if you’re used to sweaty armpits and sardine-like space allocations. Let’s keep with the 60s nostalgia instead and note the cute built in umbrella rack, which has a distinctly Reginald Perrin feel about it.

Only a smallish number of the racks (which come in three sizes) are being sold, and will be available from the London Transport website and store from March 1st. They could appeal to Londoners and train fans alike, as it’s quite a rare chance to buy a bit of original London Transport history, so if you are planning new shelving, keep them in mind.

You may remember I tried the new Philips ReAura laser recently, and wrote about it here. A funny thing happened after I finished, despite…