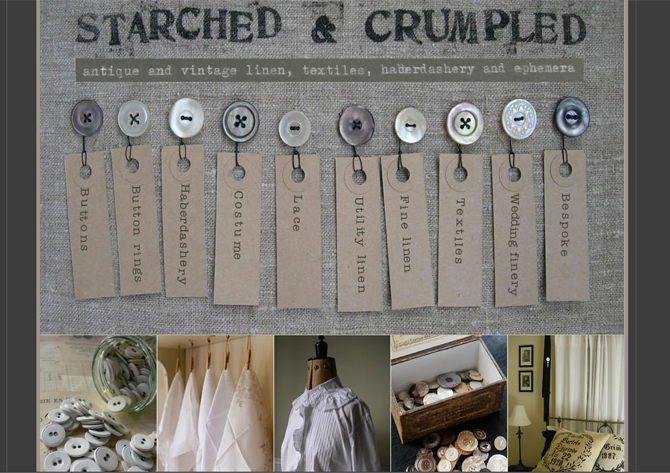 Still on the subject of vintage fabrics and mending (see previous posts) I found this lovely supplier of antique fabrics, clothing and haberdashery via the January issue of Selvedge magazine. Run by the well travelled Jennifer-Bristow Smith from her refurbished Victorian country house in Dumfries, the Starched and Crumpled site -which links to her selling site on eBay- highlights the type of items she deals in. Purchasing is done auction style on ebay and she mostly puts new stuff up on Sundays. Her relationship with suppliers, built up over years of travel and trade, mean that she has fantastic examples of Scandinavian, French, Moroccan as well as Scottish textiles going through her hands.

She also makes beautiful silver button rings, using the best examples from her huge selection of vintage 18th and 19th century mother of pearl buttons, which she gets hand crafted into your specific ring size in a Scottish hallmarked silver from a Dumfries silversmith. During February Jennifer is running a textile course on working with vintage textiles, held at her Scottish home. Sounds fabulous. It’s only open to six people so if you’re interested, contact her here.

Our favourite illustrator Rob Ryan has collaborated with NV London Calcutta to produce this beautiful silk scarf, which we would like to add to our Christmas list. We’d never heard of NV London Calcutta before, but it seems a fabulously…