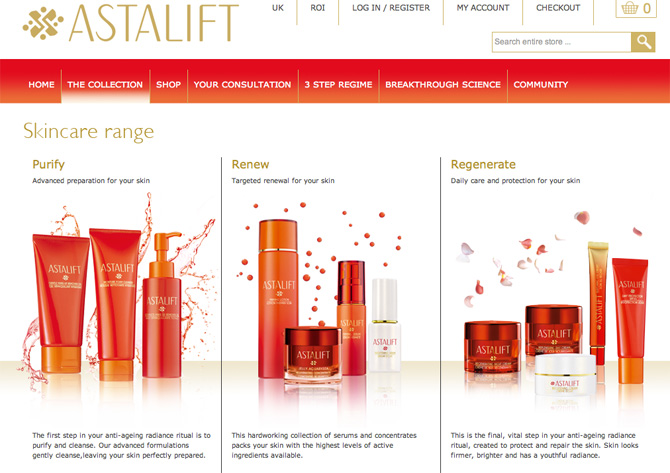 Attention ladies! We might have just found something worth getting mildly excited about in the skincare area.

To be honest, Jane and I are exhausted from seeing all these beauty brands, and we’re at the stage where we’ve seen enough and now just want to stop at one that will work. Until last week I was rather pleased with the Etat Pur stuff as it was good value and nice to use, but then I got given two very attractive pots of Astalift to brighten my bathroom.

Astalift is interesting because it is made by Fujifilm, I know, weird as this sounds it’s actually got a logical link to beauty…stick with me. All film (those of you who are reading who are under 25 might like to know that once, cameras had film in them that needed to be sent away to be turned into pictures, I know! crazy!) is covered in animal collagen, same stuff more or less as skin. Fuji scientists have been working on keeping it stable on film for years so when digital cameras came along and took the bottom out of the film market, they decided to use the skill to build a skincare brand. It’s been doing well in Japan for a few years and it launches in the UK this month.

This week’s magic ingredient is Astaxanthin, which Fujifilm claim is 1000 times more powerful than COQ10 (no, I neither know what any of these things are neither do I care). The proof is in the pudding, so to speak, and having tested the Jelly Aquarysta (which is the ‘hero’ product, works a bit like a serum) and the regenerating night cream for less than a week I can tell you my skin is softer and more plumpy (technical beauty term) and is indeed a touch more glowy.

There’s another nice thing about it, it is cheerfully, glamourously red in colour, due to the naturally red marine algae the Astaxanathin comes from (it’s also what causes flamingos to be pink). The pots are metallic red and cheer the bathroom up no end, the jelly is tomato red and the night cream a coral-y colour, so much more interesting than the paler hues we normally get.

Will this make your life better? Help you pay the mortgage? Make more friends? No, and it’s £69 for the jelly and £48 for the night cream, it’s not cheap, although it’s not the most expensive we’ve tried either and the jelly is available is a smaller trial pot at £26.

However, I will be buying another pot of both the jelly and the night cream once it runs out. Which is really all you need to know.

The world has gone mad for events and workshops, everywhere you look someone is encouraging you to sign up to learn about this or…