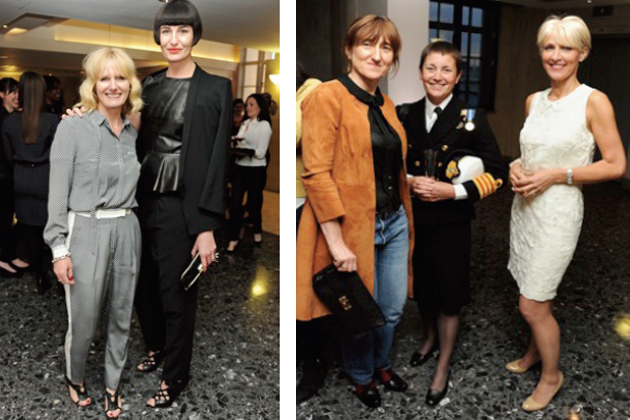 Contrary to popular legend, lots of the women I know who work in fashion, are proud to call themselves feminists. Most of those friends however, are of a similar age and have been in the business long enough to remember the good (bad) old days, when despite being an industry full of women, we were still in the minority when it came to running companies. Sexism was rife in the 80’s and one of my least pleasant memories is, after presenting the new seasons trends to the managing director of a large retail chain (who shall remain nameless), he sauntered up to me and said “good presentation Jane, but unfortunately I couldn’t concentrate on what you were saying, as one of your nipples was erect.”

We have come a long way since then and nowadays young women rarely have to put up with such treatment, but it’s still important to remind our daughters and younger colleagues about the value of feminism. Jane Shepherdson, CEO of Whistles is a former colleague and old friend, who is proud to call herself a feminist and proves it’s possible to be a strong, succesful woman and love fashion.This week she managed to combine the two things in a collaboration with Alexis Kirschbaum, Editorial Director of Penguin books.

Whistles and Penguin hosted an ‘Evening with Inspiring Women’, for eighty women from the fashion, film and media industries, who heard three highly successful women talk about their experiences in male dominated careers. The speakers -Rosie Arnold, Deputy Creative Director of BBH (one of the worlds biggest advertising agencies), Beeban Kidron, director of Carry Greenham Home (about the Greenham Common Peace Camp) tv series Oranges Are Not The Only Fruit and Bridget Jones, plus LynnThomas, Surgeon Captain and Highest ranking female officer in the Navy – were engaging, funny and very honest.

I loved Rosie Arnold’s take on working in the advertising world: “When my kids ask me what I do I say, ‘I am Don Draper,”  “you can only sleep your way to the middle” and “if a man puts a photo of his kids on his desk, he’s a great family man; if a woman does the same, she’s not concentrating” The evening was inspired by Penguin’s reissue of The Best Of Everything, the 1958 pre-feminist novel by Rona Jaffe about the first generation of career girls – which was featured in an episode of Mad Men, when Don Draper was seen reading in bed, to gain an insight into the minds of his young secretaries – and paves the way for a roll out of similar events across the country for Whistles staff and customers.

We enjoyed great food and wine, and I sat next to my other former collegue and great friend Nic, the design director of Whistles. Nic is one of the funniest, most down to earth people I know and we were delighted to be on the same table as Caroline Issa, co-owner of Tank magazine and Tommy Ton style icon. We were a little in awe at first, but of course she turned out to be not only gorgeous and fabulously put together, but engaging, funny and very clever.

Of course she is – intelligent, succesful and stylish – it’s the future!

If anyone is harbouring dreams of giving it all up and living a quieter, slower life away from the madness of our hi-tech lives,…