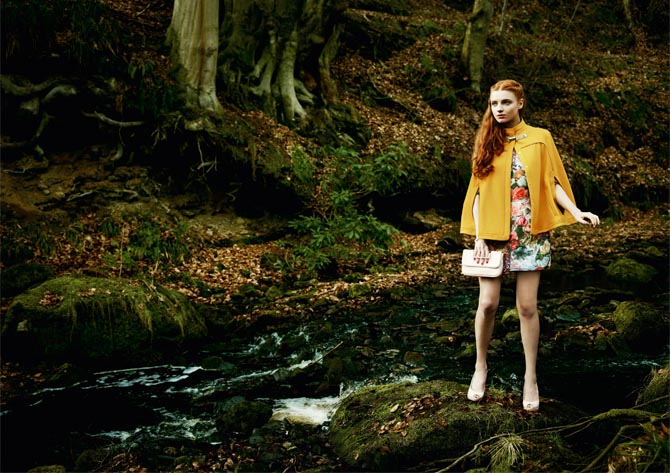 I met a very beautiful cape recently from Ted Baker. It is cheerful mustard yellow, with glorious floral satin lining and some very neat details like trench-coat seams on the back and pockets. Capes are everywhere this winter, they’ve moved off the ‘fashion forward’ rail (FFs are into The Shrug) into the ‘OK for everyone’ section, but I am wary despite being instantly smitten, it’s a cape and they are tricky. 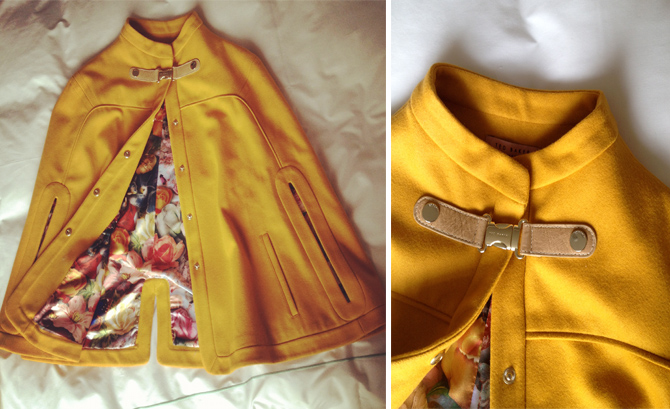 The Ted Baker cape ( the Zapper, at £199) is nicely short, so it wont have too much flapping fabric, but will that make it chilly? And despite having useful pockets and generous sized arm slits, what do you do about handbags? Jane warned of looking too ‘district nurse’ which is a problem if you choose a navy or black one.

I decided to seek the advice of some TWR readers who have some experience at cape wearing themselves. Lee Randall lives in Edinburgh and recently bought a Raymond of London long black wool cape with a hood and a vivid red lining from her local Barnardos store. She claims it’s more Seventh Seal than Red Riding Hood, is generously swooshy and (important for Scottish winters) warm, but she did have bag and arm issues.

“The arm slits are a bit too close together for my liking.” she told us “They were probably placed there with a muff in mind (remember those? I had a sweet white rabbit fur number as a girl, with an integrated change purse). I really don’t want to look like a squirrel holding my handbag sternum high like a cache of prize nuts. The first day I wore my cape I fought hard to juggle my giant bucket handbag (Zara) and a grey canvas Persephone carrier containing my lunch and some shoes destined for the cobbler. The angle was bizarrely awkward with both arms out, and they fatigued quickly as a result. I finally resolved this by keeping one arm inside the cape and holding the two bags in one hand on the outside. It didn’t feel altogether comfortable.

Next day I had the same handbag and a slim canvas carrier, which I was able to wear slung over my shoulder under the cape with out it being too noticable. I kept my handbag under the cape as well, which meant that I probably — unfortunately — resembled a portly matryoshka doll, but sillhouettes be damned, I was warm and cosy and walking was a lot more comfortable. I’m still a bit worried people will think I’ve given up on tailoring and regaining my waistline, but that’s a small price to pay for feeling like a character out of a romantic medieval tale!”

Next to experienced cape wearer Francesca Muston, who has two capes, both from Zara. She told us ” I love a cape because they’re very dramatic – they’re the outerwear equivalent of a smock or billowing dress and have that 70s feel which I’m always down with. They also look very impressive on horseback but I’ve never had the opportunity to put mine through their paces in that context. On the downside they can be draughty and there’s definitely a bag issue – really you’re better off with a hand-held bag but failing that a cross body bag will also work. A shoulder bag is an impossibility.

On the plus side if you’re wearing something like a chunky knitted jumper or a kimono (2 of my other winter staples) then a cape will fit nicely over the top where another coat would present all sorts of bunching and Michelin Man-type issues. I also found that when I had my wrist in plaster it wouldn’t fit through a coat sleeve so the capes were invaluable but I appreciate this is a niche requirement. Now I’m heavily pregnant the capes will definitely see me right when it’s cold.”

Good advice from our readers.

Capes ARE useful for wearing over odd shaped or bulky clothes (I tick both of those boxes) and if you think bicycle rather than horse, might work nicely for the urban or country cycler. We do LOVE a bit of clothes drama here at TWR so that also sounds excellent.

So if you are contemplating one, here’s the TWR Do and Don’t list

Do be bold with your choice of colour or lining, so avoiding being mistaken for a mid-wife or visiting nurse. It’s a great excuse to add some sartorial excitement.

Do wear one horse riding. Or on a bike.

Do think about length, long equals warm and snugly, but short might be better if you tend to carry lots in you hands.

Do practice the ‘Downward Dog’ yoga position to strengthen your wrists, they will be under strain with all that bag carrying outside the cape slits.

Do consider one if you have a tendency to buy bulky sweaters or clothes with big sleeves, those over-sized silhouettes currently on the pages of Vogue (Celine & Topshop) look like they’d NEED a cape.

Don’t use a shoulder bag, instead buy a cape with pockets you can stuff everything useful into or prepare to carry a lady-like clutch or hand-held number.

Don’t forget to check your silhouette, the ‘everything underneath’ policy might result in concerned looks from passers by, particularly if you live in London and travel by public transport, as we tend to be nervous of people concealing stuff about their person. Looking slightly fat  will be the least of your worries as you are flattened by a SWAT squad suspecting terrorist activity.

I am still contemplating what to do, does anyone else have any tips? Should I buy? Let us know….

Last Saturday big A and I took a trip down to the Bethnal Green Working Men’s Club to check out the Canine Games, a dog…