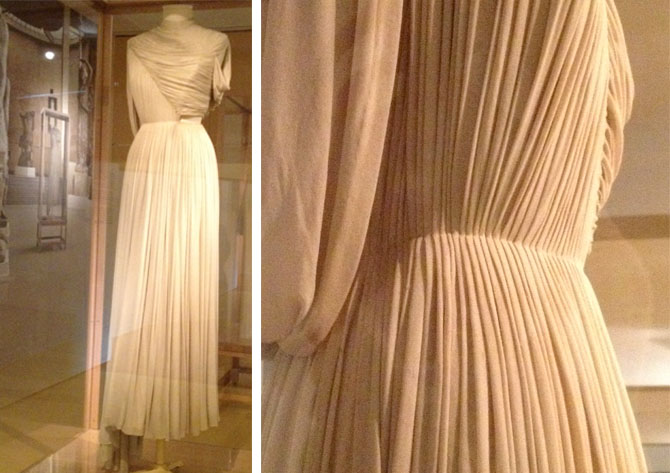 For those of you who wont have the time to get to Antwerp before February 2013, we’re going to take you around the excellent exhibition Madame Grès, Sculptural Fashion at MoMu, the city’s fashion museum. The show was in Paris previously and has just moved to Antwerp, BIG love to the museum for allowing free photography access.

Madame Grès (1903-1993) wanted to be a sculptor but her family weren’t keen so she ended up designing dresses. She said ‘I wanted to become a sculptor. For me, working with stone or fabrics is the same thing’ . Art’s loss was fashion’s gain as she ended up being pretty nifty with pleats- tiny, tiny ones that nipped swathes of super fine silk jersey or featherlight muslin to slender waistlines, shoulders and cuffs. Think Greek Goddess dresses.

Her clothes were nearly all made by draping the fabric over the form and then pleating away until the shape appeared, negating the need for seams. With her early creations she became famous for seem-free clothes. 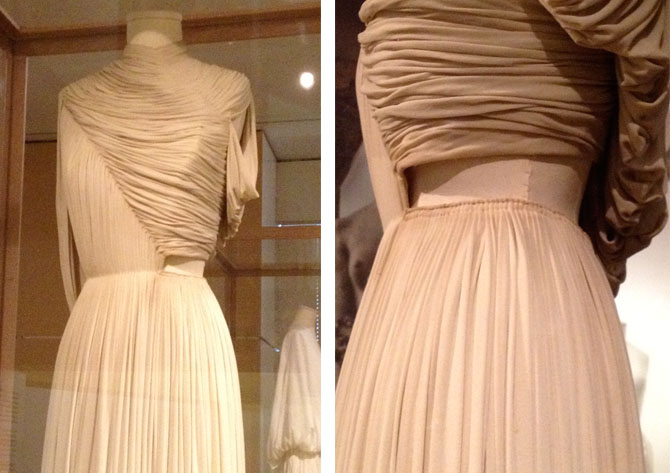 Madame Grès opened her first Paris studio in 1934 and her sculptural sheath dresses became the romantic ideal of the time, and their cinematic qualities attracted film stars such as Marlene Dietrich. She also invented the perfume Cabochard after a trip to India, which was an instant global success. 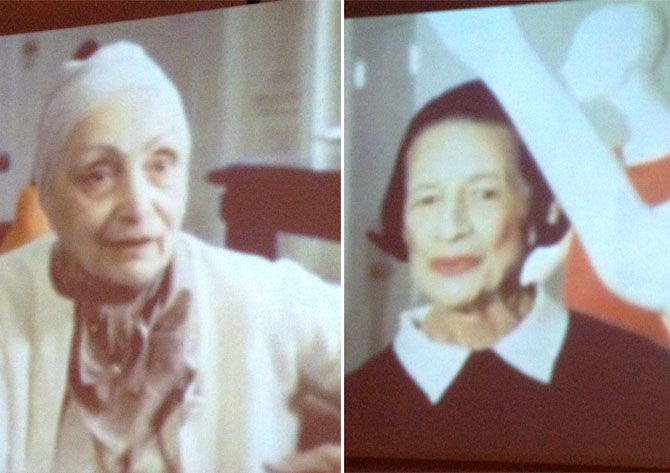 There is a short film of her talking about her work, with current girl-of-the-moment Diane Vreeland commenting (Mrs V is EVERYWHERE). I was struck by how strong and clear both women’s style was, Madame Grès with her turban’d head and DV with her severe hair and stark angular shapes. Marvellous stuff, both had such a strong point of view, not in the least wishy-washy. 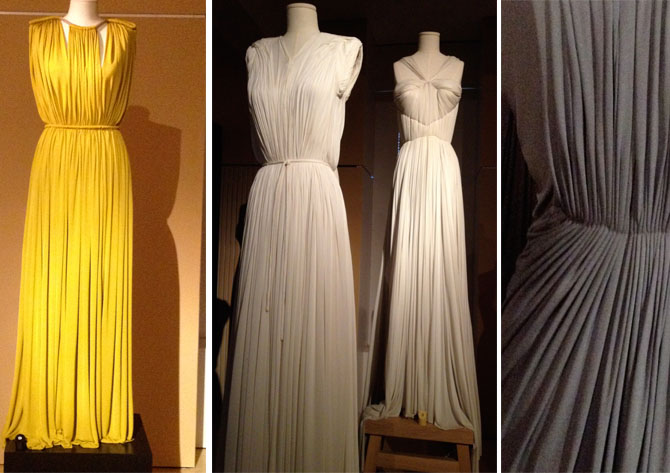 The 1940s through to the 1960s saw Madame Grès move into daywear…every dress a masterclass in nip, pleat and tuck. Demure yet amazingly seductive in shape, each dress was a joy to inspect, there’s no internal corsetry, the pleats just sit on a soft inner base, as Madame Grès felt a woman’s own shape should be celebrated rather than bullied to conform an ‘ideal’. Although every sample here is a tiny size, so not sure how many larger ladies actually wore these shapes. 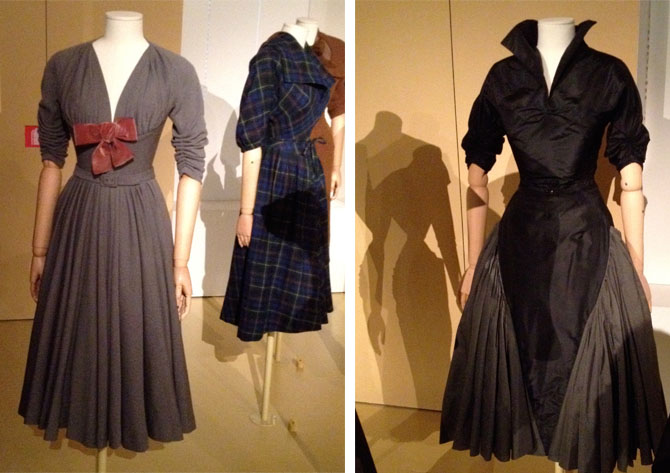 You can see the sculptor in her everywhere…. 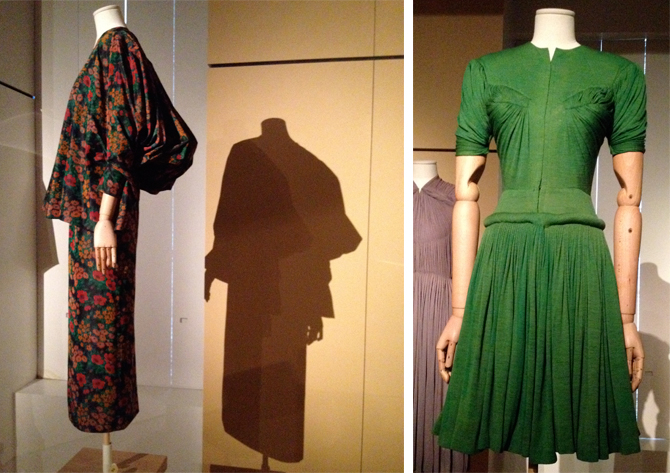 And then in the 60s she went all ‘modern’ and turned out some fantastic clean-lined day dresses which were my absolute favourites. The outfits are SO beautifully executed, so fresh and neat yet amazingly cut so as to appear simple….just look at the beachwear! 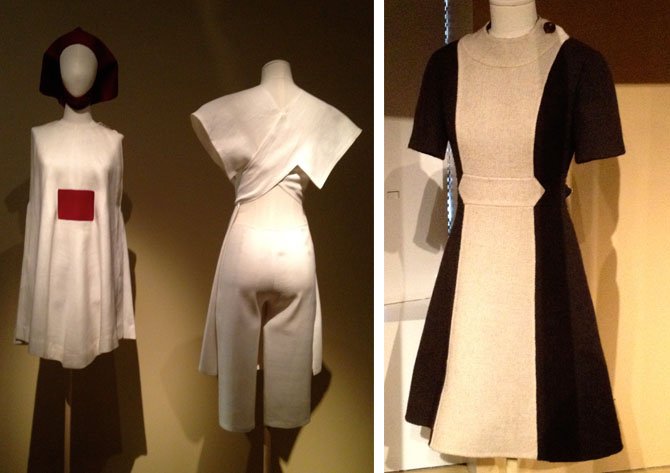 She influenced many, Yohji Yamamoto’s 2005 collection was an homage to her, Jean Paul Gaultier is an ardent fan as is Haider Ackermann and all three designers are represented in the exhibition with outfits inspired by Madame Grès. 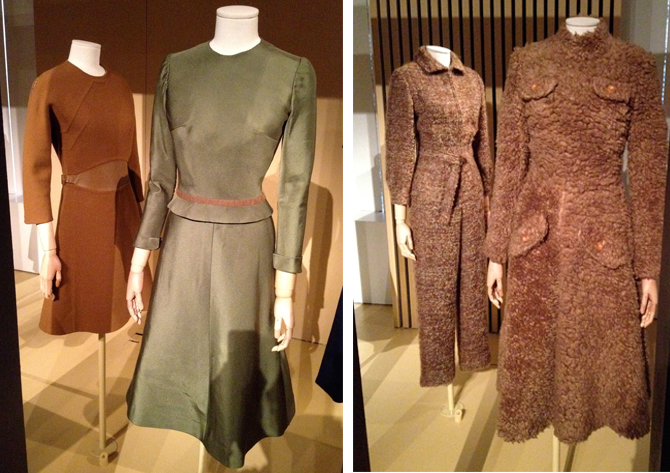 Sadly things went slightly downhill at the end of her life, with bankruptcy and a slow slide into anonymity (it took a year for her death to be reported in Le Monde in 1994) but this exhibition puts her right back on top, where she clearly belongs.

Margaret Howell, what’s not to love? We’ll take the lot, thanks. Off to practise wearing thick-ish leather waist belts (done up at the back!) with everything …..