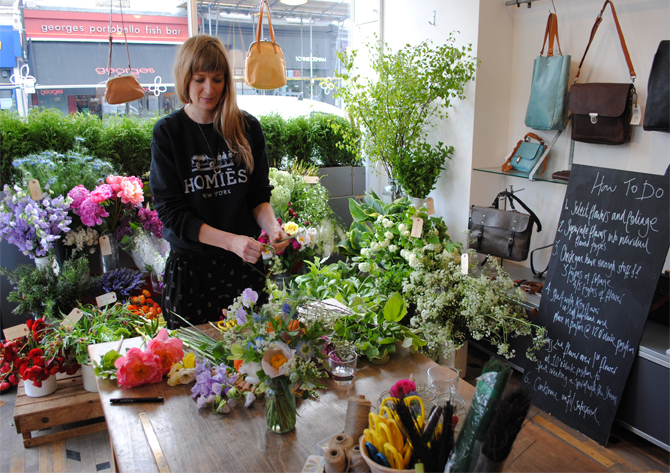 As part of Chelsea Fringe Ally Capellino and That Flower Shop got together to offer a flower workshop for some of their customers and we were invited along. I am rubbish at arranging flowers, I stick to putting all of one type in a vase to avoid having to ‘arrange’ anything. But talented Hattie Fox, founder of That Flower Shop has taught me that it’s really not that hard to put together a lovely casual arrangement that wouldn’t look out of place in a copy of Elle Decoration or Country Living.

Here’s how you do it. Firstly, you need a selection of nice flowers, nothing fancy, hedgerow types such as foxgloves, nigella, lilac and cow parsley are good. Hattie also used herbs such as mint and rosemary which I thought was inspired and she suggested you stick to a ratio of three types of foliage and five types of flowers, a couple of each should do it, for a medium sized vase. 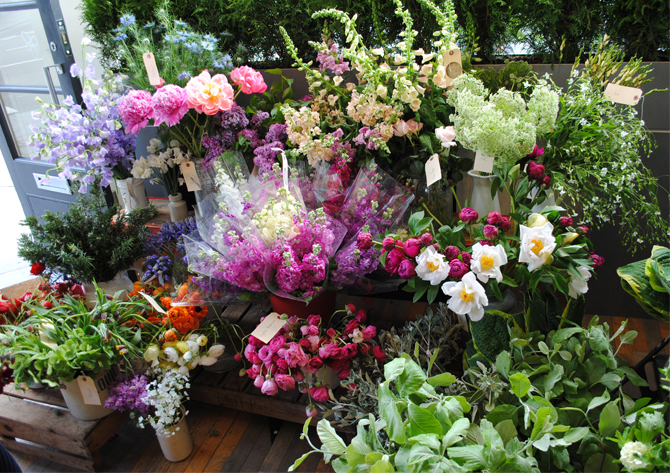 Of course it helps if you can lay them out somewhere nice, like an Ally Capellino store, bags and flowers make a heady mix…. 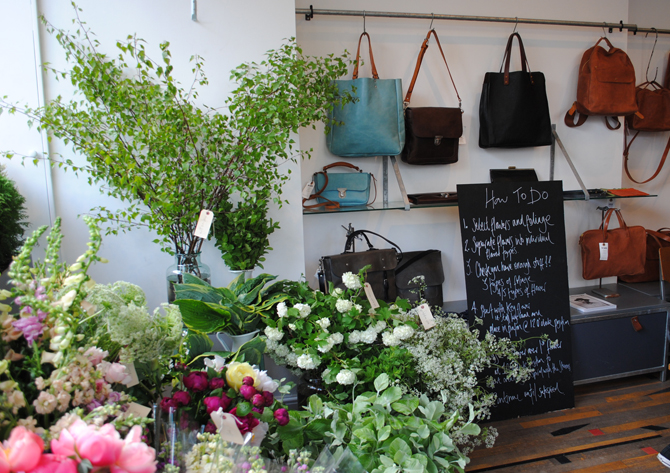 At this point I did get a bit distracted by the lovely black leather Loretta clutch from the grown up sounding M’Lady collection from Ally Capellino, useful for smart evenings. It has a soft suede lining and a robustly firm frame. I have Ally C bags older than my children, they really do fall into the ‘last-for-life’ category. 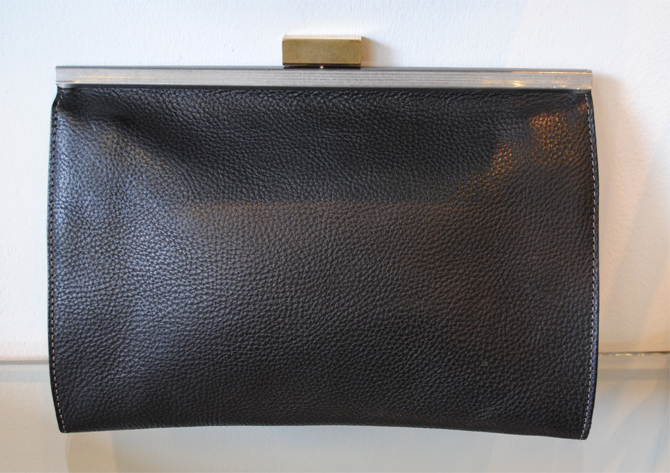 Back to the flowers…..You need to be organised and have a good pair of scissors -the yellow handles ones are flower scissors – a small clean jam jar if you’re doing this at home or some natural string for tying if you want a posy. And a bit of space, 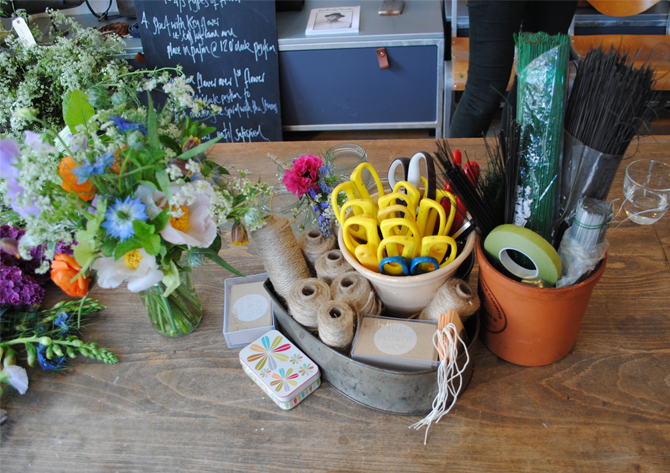 Then you need to lay out your flowers and foliage in an organised way in front of you, so you can grab a flower easily. Clean off the greenery from around the bottom of the stems, you want all the action to happen at the top of the bunch and leaves under water will cause the bunch to die more quickly. 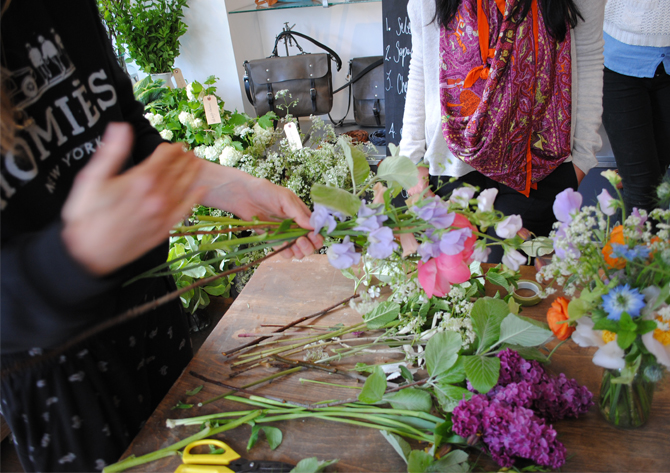 Hattie chose her favourite flower to start with, and held it straight in front of her. Then she added flowers to the bunch at an angle to the left the first flower, she described it as a 10.00 o’clock angle, imagining the first flower was at 12.00 o’clock. You then add up to three-four flowers at the angle, then gently turn the bunch to the right, which makes the stems slightly twist and then you carry on adding flowers and foliage on the 10.00 o’clock angle until you’re done.

Hattie claimed it’s easier not to look frequently at the bunch structure, just build up your flowers and when you have a good handful, just check for gaps. Don’t hold them too tightly, don’t try too hard, just build and enjoy. Use firm foliage to jam weedier blooms in place, and try adding three flowers at a time in a group if they are small. 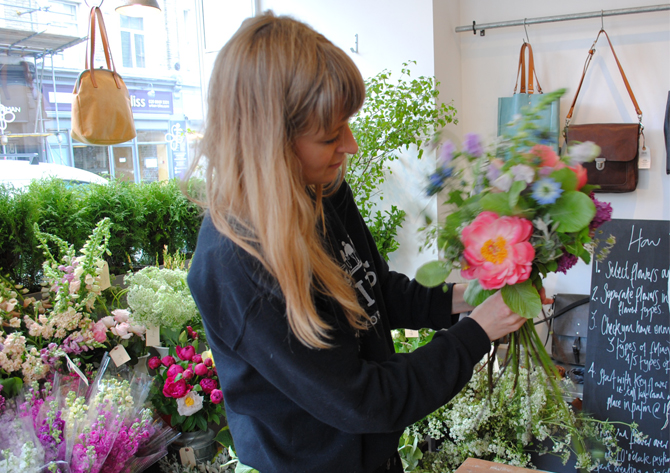 Amazingly, I found it reasonably easy to do a half-way respectable arrangement. You will too, it’s easier than you might think, although we were all a long way off Hattie’s standard, she was amazing to watch, so fast and accurate. Apparently she’s been doing this for ten years, but since she only looks about 18 I don’t believe her, don’t you love her Homies/Hermes T shirt? 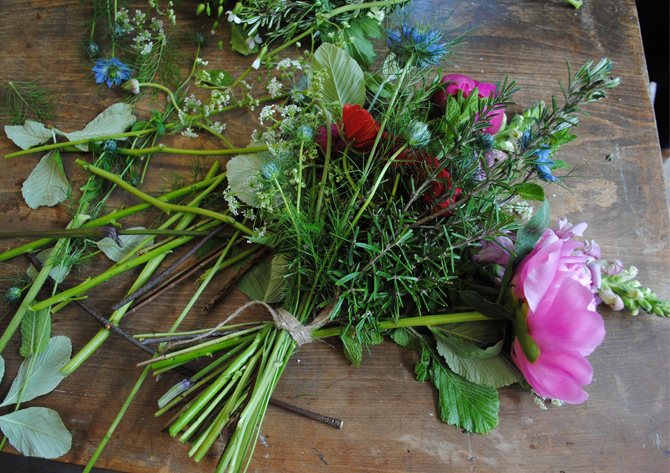 Here’s my finished bunch, above.Other key points to remember are don’t make the bunch too tight, a bit of loose movement makes it look much more natural and alive, cut the stems off shorter than you would think, as then it will sit well in your jam jar (it’s a common fault to have stems to long apparently) and disolve a teeny bit of sugar into the vase water to keep the flowers lasting longer. 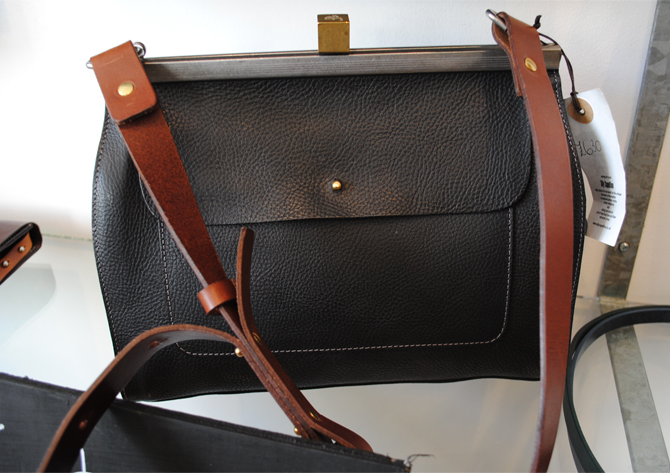 Then it was time to look at some more bags…I’m thinking of moving onto a frame bag now I have enough satchels…this Lana one might go on the Birthday list. Or the Donna below, which is new. 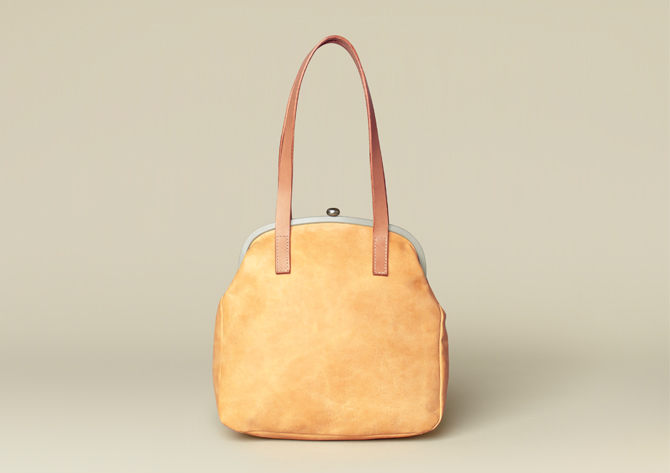 So this weekend I will be raiding my garden to practice, even if you have just half a dozen blooms out, that’s enough to create a good vase full once you’ve added some greenery and I’m over run with mint currently. Have a go!

It was such a fun event to go to, check out Hattie’s studio in Shoreditch (she’s moving to an exciting new space in the autumn, so watch out for that) or her website, which is full of lovely ideas. And we were in the Ally Capellino store in Nottinghill, right at the cooler north end of Portobello. 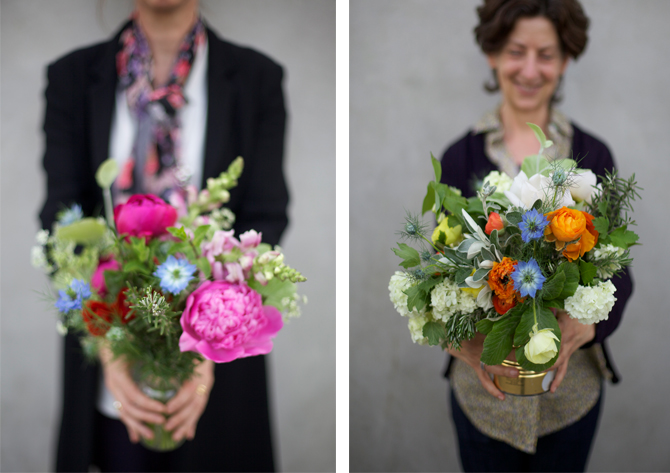 Listen up people, we have a new favourite shop, & Other Stories. I know we’ve written about it before, but recently it’s absolutely nailed…