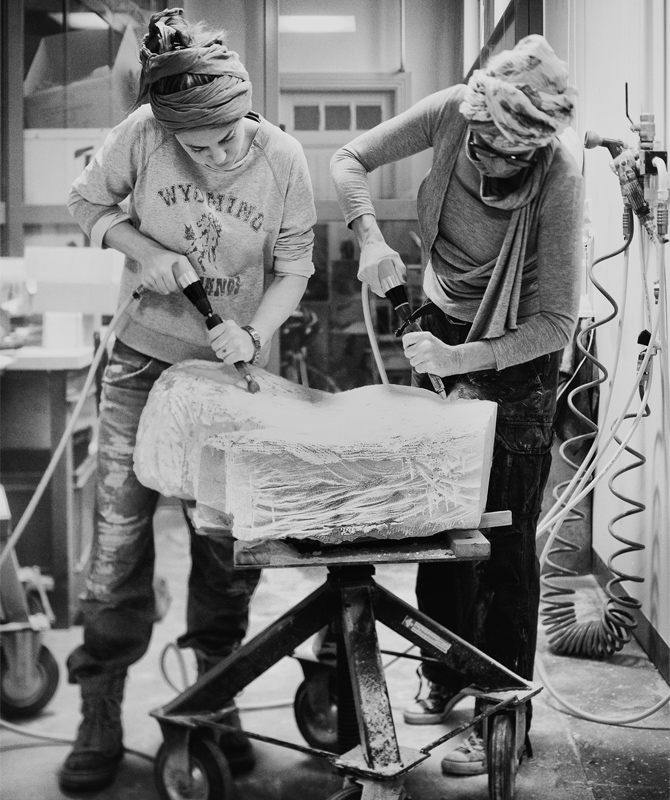 Bibi and Michele in the studio

During Frieze week a while back I got to meet Dutch mother and daughter sculpting team Michele Deiters and Bibi van der Velden, who had a small show at The Couture Lab in London (it’s on until Nov 8th). Both have a strong sense of style -even while wearing work clothes in the studio (above) which grabbed my attention, shallow soul that I am.

They also run the fabulous looking White Space shop and gallery tucked away in a back street of Amsterdam, yet more inspiration for out eventual TWR fantasy event space, tacked onto our TWR fantasy store, obvs. 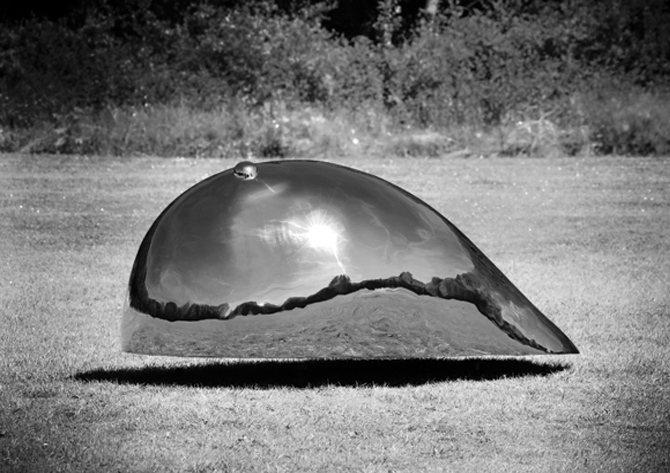 My favourite works are the metallic ‘tits’ as both Bibi and Michele call them, the first of which were made from super-polished stainless steel to deliberately bring in the sculpture’s reflected surroundings as part of the work  -a sort of Mother Earth reference. They are now making them in blown glass and you can’t help but want to stroke them, I asked them if there was a feminist streak running through the arty narrative? 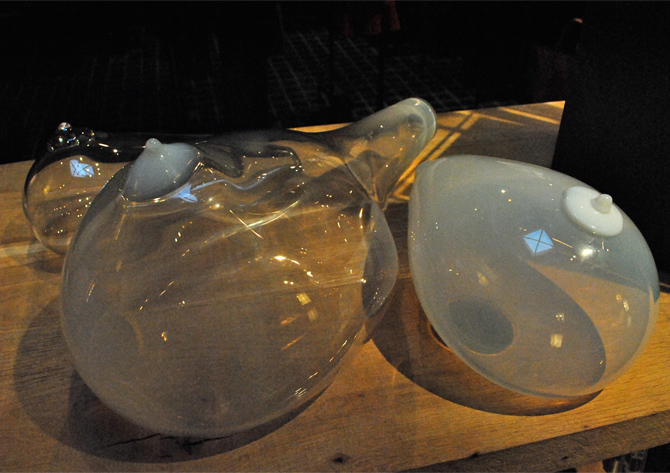 Michele: ‘When we first did the Tits, it was one of the aspects we considerd, being both women and mother and daughter. Feminism is a big thing in our work, but in a more organic, womanly way rather than being a political statement. My mother was a strong feminist in the 60s, working, studying and bringing up her family on her own as my dad died young. She was a big inspiration to me. I want our work to show the strength of women, my style of feminism is about being strongly independent, thoughtful and self supporting, I don’t like women who have that slightly pathetic weakness of mindset’.

Interestingly, Bibi see her generation as having different problems to that of her mother…

Bibi: ‘For my generation, we are stuck in an evolution void, we are expected to be equal to our spouses in earning money and being successful, but we’re still left with the house stuff and kids most of the time, so we have different problems.’ 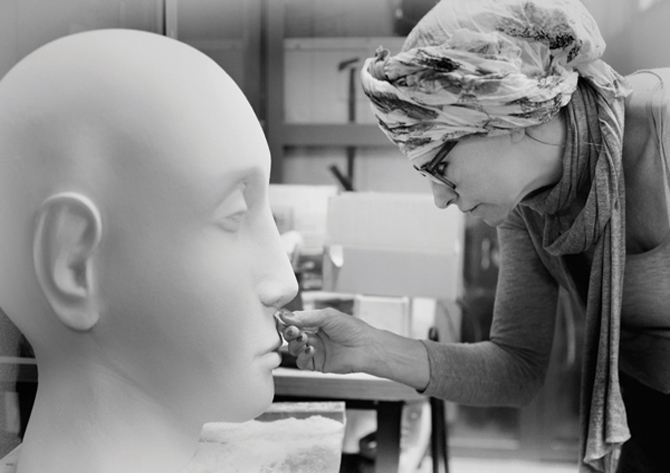 The glass tits are gorgeous, and difficult to make. Michele told us ‘We worked really closely with the glass blower -who we used because neither of us blows glass well enough -to get the shape right, we thought it would be easy but it was incredibly hard!’ 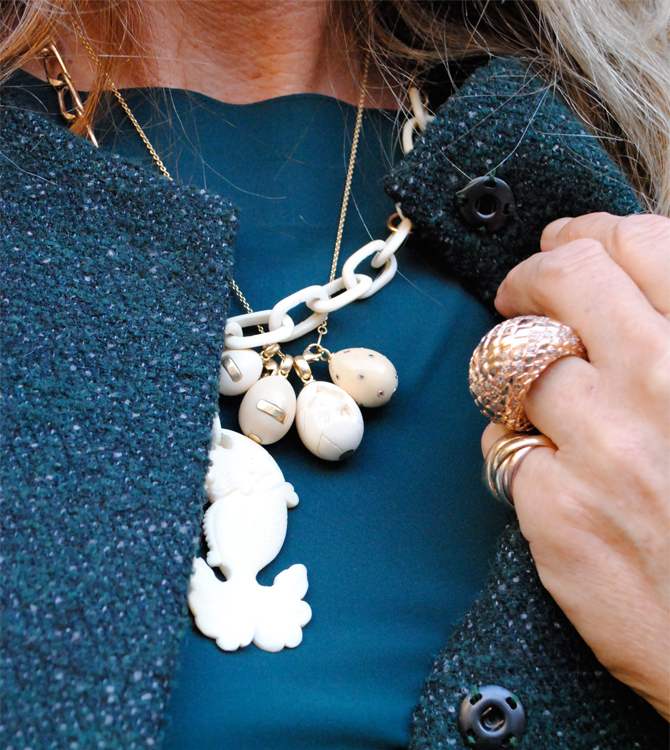 Bibi also designs jewellery and her collection is sold at Dover Street Market in the UK and when we met both women were layered up with fabulous things. Most interesting are the mammoth bone rings and egg necklaces. Mammoth bone is turning up all over the place, due to global warming melting the ice that has kept it preserved for 40,000 years. Bibi explains that although it is expensive, it is available in large enough quantities to buy and make jewellery from, in fact  treating the bone is essential as if it is left in the atmosphere, it rots away.

Bibi said that her mother is like a walking sales room, she wears the jewellery so well, whenever people see it on her, they want to buy it… 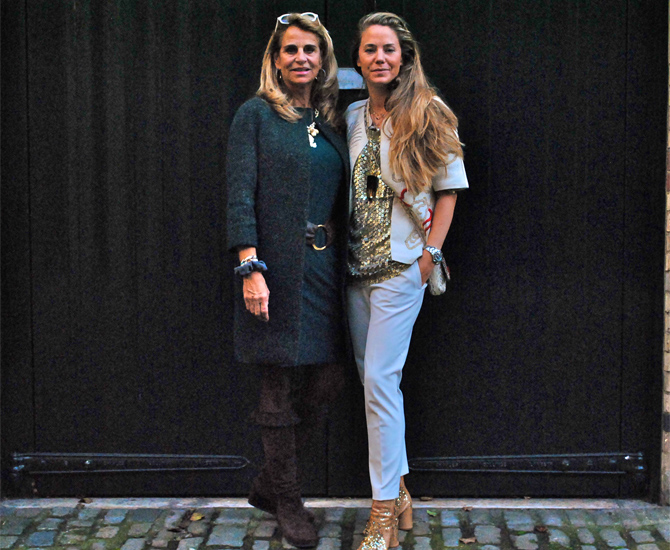 Both women scrub up well outside of the studio, as you can see. I loved Bibi’s Martin Margiela boots, which shed sparkly glitter where she walked. ‘It’s deliberate that they scatter bits  as it’s supposed to show your impact on where you’ve been’ she said…slightly unconvincingly…..I’m guessing that was made up by the Margeila team after they figured out the glitter was going to shed everywhere. 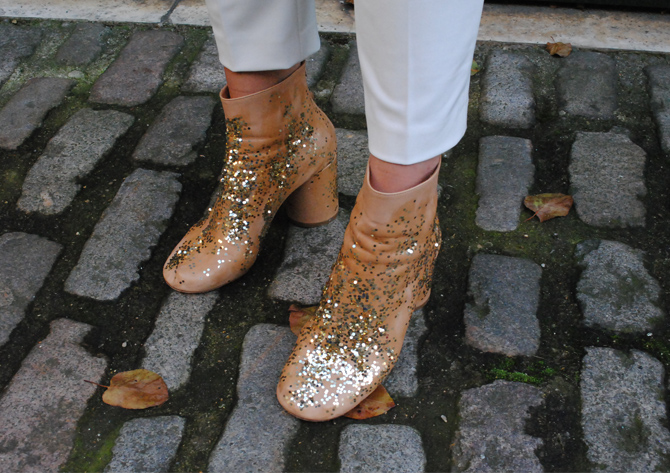 If you are ever in Amsterdam check out the studio, or you can follow their work on the website here.

Something to cheer you up this afternoon, a cute vid from Harvey Nichols for all our dog lovers. I notice on the HN website a few people have got a bit hot under the collar about the use of small,…