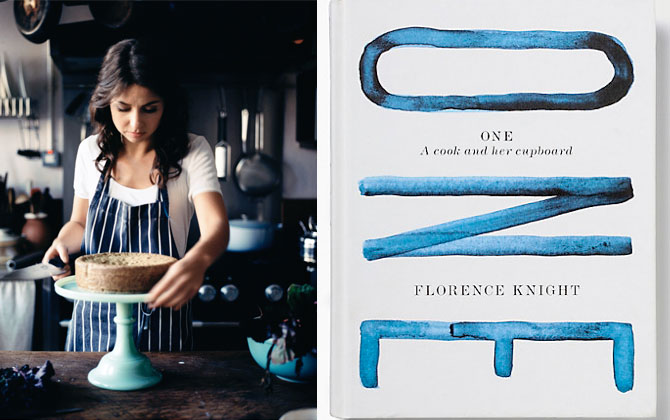 Having seen Florence Knight talk about her first book One: A cook and her cupboard at the Regent St, Anthropologie store last week – I think I have developed a serious girl/food crush.

Naural, honest and very down to earth, Florence was responsible aged just 27, for the food at the extremely popular Polpetto, the small Venetian inspired restaurant above the French House pub in Soho.

She quickly established herself as one of the most talked about chefs in London and Polpetto was so popular the venue soon became too small and it closed in May last year. Restaurant entrepreneurs, Russell Norman and Richard Beatty have now secured a new site in Berwick Street and Polpetto will re-open in January 2014, with Florence at the helm.

Florence’s book showcases her “less is more” uncomplicated style of cooking. Rarely using more than four ingredients, she is passionate about using seasonal produce and creates unusual combinations of flavours in an simple way.

We got to taste some of her recipes at the event and her beetroot and goats cheese dish was so delicious it made Amanda and I rush out the next day to buy Beetroot – something I rarely eat!

I know none of us need another cook book, but this one is on our Christmas list!

One: A Cook & Her Cupboard by Florence Knight

Call me glamorous, but I have been seen carrying my lap top round in a Wholefoods canvas bag. I know it’s not a good look but I have never been able to find the perfect lap top bag. They are…