Vivienne Westwood has never been afraid to say what she thinks and her latest way of making a statement about climate change was more than evident when she took to the streets last week to join a protest in her local borough. Her newly cropped grey hair was off set by drawn on red eyebrows, the only evidence of her previous bright orange do.

Removing her beanie as she joined comedian Mark Thomas and artist Maggi Hambling on Lillieshall Road in Clapham to oppose the sale of long standing housing co-operatives, she revealed her new look.

“Vivienne cut her hair as we must all wake up to Climate Change,” said a spokesperson for her label.”And secondly she wanted to cut the red out for a while and have it white- to show she’s proud of her age.”

Westwood is an active climate change campaigner and last month said she wouldn’t be expanding her business, so that she could focus on backing Greenpeace’s work to protect the Arctic. 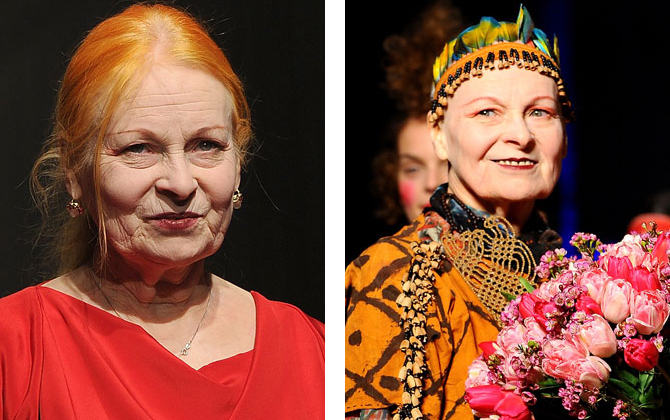 In the past she has also spoken about our over indulgence when it comes to fashion. ” Instead of buying six things, buy one thing that you really like” she advises. “Don’t keep buying just for the sake of it. I just think people should invest in the world. Don’t invest in fashion, but invest in the world.”

Queen Viv, we love you and your grey hair.

Not quite as sophisticated as the fabulous bicycles Amanda has been snapping in Italy, the bikes I have seen in the catskills and Connecticut are a little more hippie/retro inspired, but lovely nonetheless.