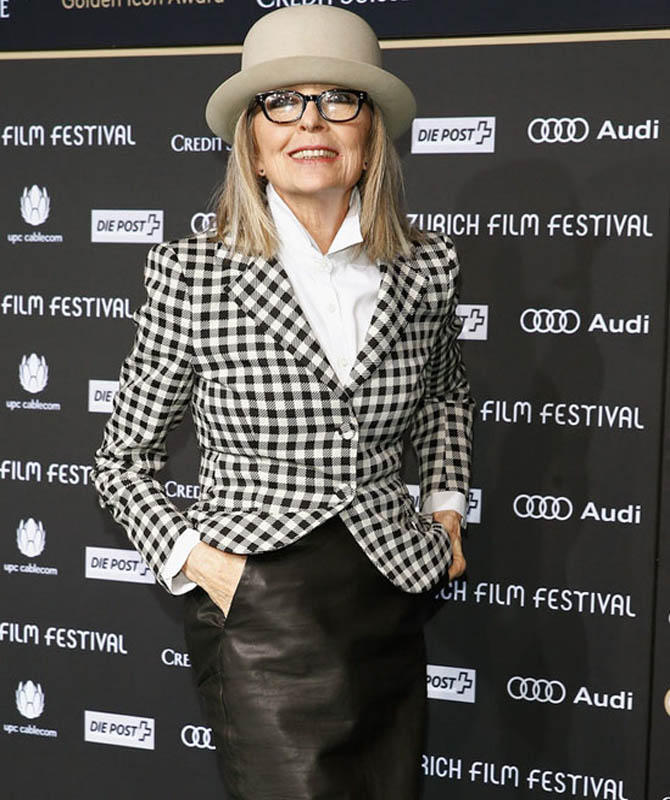 Often on TWR we are asked what the ‘rules’ are for dressing once you get older. When we first started the blog (six years ago next week) we wanted to be helpful, so we’d suggest a few pointers; perhaps watching hem lengths, avoiding sleeveless dresses, shelving the bikinis and toning down the leopard print etc.

But  we soon realised we were falling into the ageist idea of having to be less yourself and more what others might prefer us to do as we aged.

So bugger the rules -there ARE no rules.

If you’ve loved wearing bowler hats and kooky clothes since you were a young person and it makes you feel wonderful, then jolly well go ahead and wear ’em. If you feel good inside, you will look good on the outside. Fact.

Diane Keaton, seen here at the Zurich premiere of her new film And So It Goes, is continuing her life long work of rocking her androgynous, kooky style. As a proper grown up, she doesn’t seem to care one jot what people say about her bowler hat or her ankle socks. She clearly loves them and she looks amazing.

As Tom and Lorenzo say on their TAL site, as someone who pretty much invented a fashion look all by herself (Annie Hall) she gets a lifetime pass on style. We say, keep it up Diane. (Thanks to TWR reader Monika for tipping us off) I came across Kristen Perers work at the Mirror Mirror conference last week and weirdly, as I was writing this post, she emailed me….