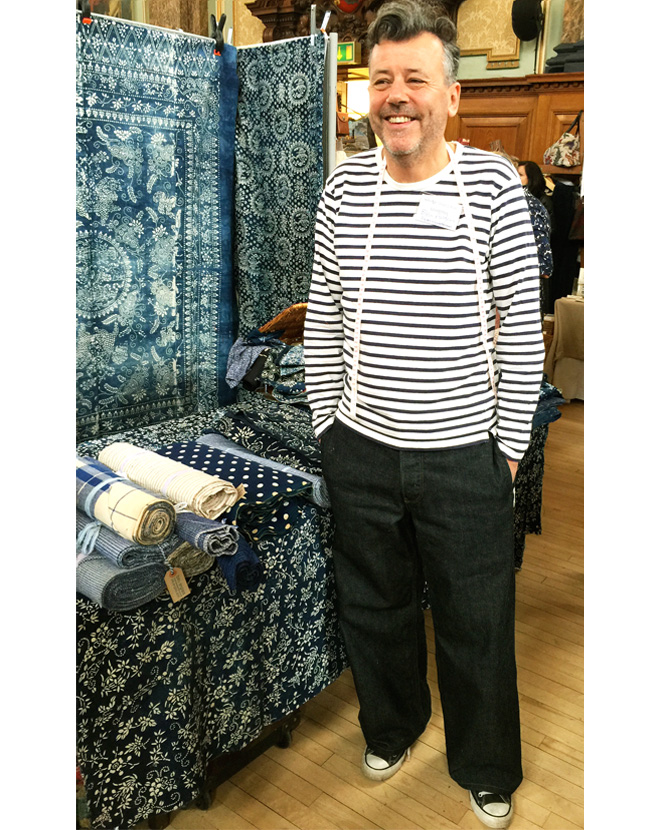 The fashion world has gone mad for indigo and denim this season. There are some lovely things out there and I might have to write one more post on a few of the best buys. Meanwhile, you might like to know about the charming Noel Chapman, textile specialist and founder of Bleu Anglais, his small company selling absolutely gorgeous original Chinese indigo paste-resist patterned cloth.

I met Noel through TWR readers Belinda, of True Brit Knits, and found his enthusiasm for this little researched type of traditional Chinese catching. Noel travels to rural China to find the best examples of this lovely indigo cloth, which is traditionally used in Chinese clothing, often for children’s clothes and home linens. I saw some examples at the recent Selvedge Fair, where he apologised for only having a few lengths left, having just been cleaned out by an interior designer who had spent large sums securing the best pieces. After years in the fashion industry, Neil has developed a great eye and his stock doesn’t hang around long.

He’s only been selling the Chinese indigo fabric for a year or two, having found it irresistible himself. His travels as a knitwear designer for big brands meant he could pick up the odd quality piece for himself. As he said to me “Other people have sports cars, my vice is fabric, I have far too much, piled up in cupboards and drawers, which I’ll take out to admire occasionally and then fold it all up and put it back ‘ (ahem, who else has this habit? I know I do…..), Eventually he found enough time to start bringing small amounts back to sell to interior designers and collectors. He quickly found a growing market in today’s indigo-mad world and soon hopes to write a book on the stuff, as he thinks there’s much to cherish about the manufacture of the fabric. ‘The pieces I find are so beautiful, they’ve often been dipped as much as 90 times to get the depth of colour and there’s so  much symbolism in each of the designs.

I bought a beautiful small length – about 50cms – with simple flowers on for £20, which I’ve used to back-patch the distressed bits of my recent jean purchase (I’ve found I’m not much enjoying flashing flesh through all those trendy distressed bits  and worn holes). if you want to look at Noel’s collection, best email him on [email protected], but you should instantly follow his delightful Bleu Anglais on Instagram feed to see what I’m talking about. 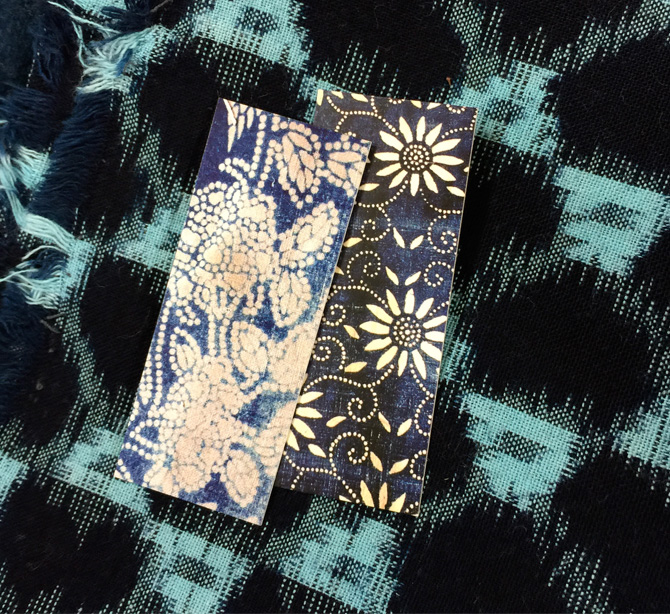 Noel’s business cards, above, are printed with assorted prints he’s found. If you are interested, Bleu Anglais will be at the Antique Textiles and Costumes Fair at Olympia Hilton Hotel, 380 Kensington High Street on June 21st and again at The Textile Society’s London Antique Fair at Chelsea Old Town Hall on October 4th.

If you haven’t already bought a pair of coloured trousers, then what are you waiting for? Orange is just not going away and these…