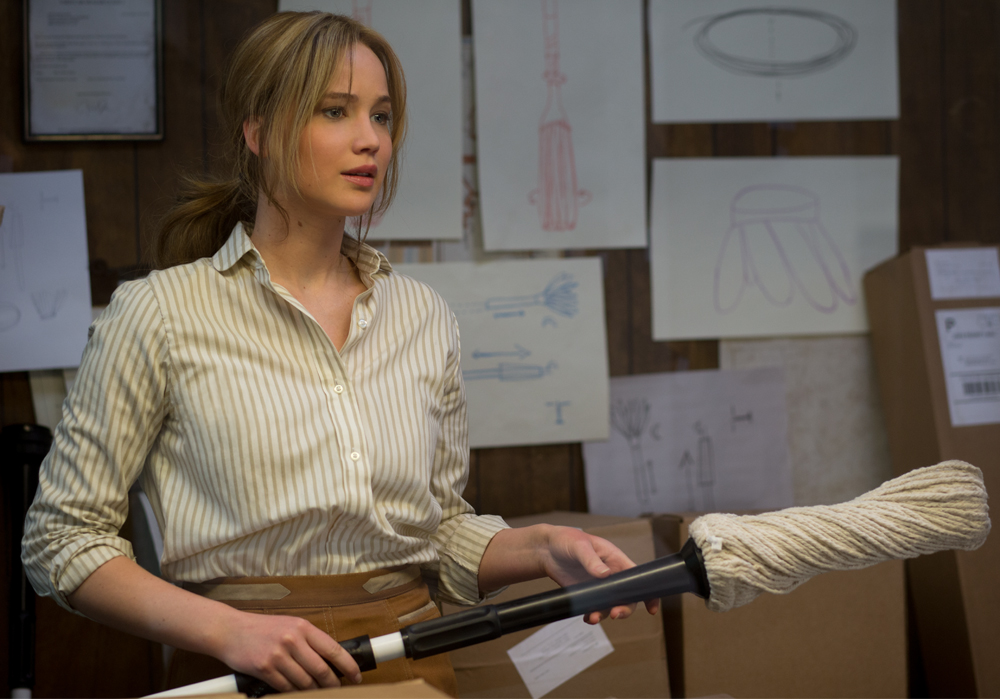 To celebrate the movie Joy coming out on DVD recently, the promoter sent through an interesting list of female entrepreneurs you almost definitely will never have heard of. I was fascinated, having just read the wonderful The Trouble With Women, by Jacky Fleming (hilarious and shocking, all at once) which gently mocks the lack of women geniuses reported in school curriculum. It also makes me even more determined to support The Women’s Equality Party for the upcoming London Mayoral Elections.

Anyway, we have two free copies of Joy, with the excellent Jennifer Lawrence playing Joy Mangano, to give away on DVD, so if you are interested, leave a comment below on what you’d invent to make life better. I’ll pick the two winners out of a hat next Tuesday morning.

Miracle Mop
Joy Mangano, an American inventor, business woman and entrepreneur is known for many of her famous household inventions but most notably the Miracle Mop in 1990, a plastic mop that could be wrung out without the user’s hands getting wet.
Home Solar Heating
Residential solar heating was invented by physicist and solar-power pioneer Dr. Mária Telkes, she teamed up with the architect Eleanor Raymond, to build the first home entirely heated by solar power in 1947.
Modern Electric Refrigerator
Florence Parpart was an entrepreneur and inventor who created the modern electric fridge. She improved the model during time and made the first modern refrigerator that used electricity. She won a patent for her machine in 1914 and was successful at marketing and selling the product.
CCTV
Marie Van Brittan Brown’s system for closed-circuit television security, which she co invented with her husband and patented in 1969, was intended to help people ensure their own security, as police were slow to respond to calls for help in her New York City neighbourhood. Her invention forms the basis for modern CCTV systems used for home security and police work today.
Foot Pedal Bin
Lillian Gilbreth improved existing inventions with small, ingenious, tweaks. In the early 1900s, she designed the shelves inside refrigerator doors, made the can opener easier to use, and tidied up cleaning with a foot pedal bin. Astonishingly, she did all this and produced twelve children. Talk about multi tasking.
Windshield Wipers
Mary Anderson invented the first manual windshield wipers in 1903. Another woman inventor, Charlotte Bridgwood, invented an automatic version with an electric roller in 1917; neither took off at the time. But by the time Anderson’s patent expired in 1920, windshield wipers were cleaning up. Cadillac was the first to include them in every car model.
The Dishwasher
Patented in 1886, the first dishwasher combined high water pressure, a wheel, a boiler, and a wire rack and was invented by Josephine Cochrane. She was inspired to invent the machine in part to rid herself of her dead alcoholic husband’s debts.
Glare-Free Glass
Katharine Blodgett got her glare-free glass invention patented in 1935. Glare-free glass means we now have glass with a thin, nanometres-thick coating that entirely reduces glare and distortion. It’s called “invisible” glass for its reliability. Katharine lived with her partner Gertrude Brown in what was delicately described as a Boston Marriage back in New England in the early 20th century.
Kevlar
Kevlar, the material used to make bullet-proof vests (although it sounds like something out of Gavin and Stacey) is one of the strongest materials in the world, but it was created almost by accident by DuPont chemist Stephanie Kwolek in 1966. DuPont was looking for a material for stronger tires and Kwolek and her team kept producing a cloudy, strange chemical solution which they initially threw away. But Kwolek convinced her teammates to weave it into a fibre.

So, you know how we feel about celebrity ‘designers‘. When M&S invited us along to meet Twiggy and see her new collection (launched 12th…