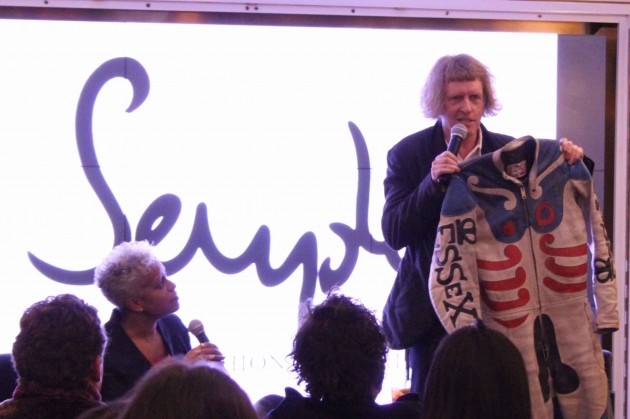 Grayson, holding up his Essex made ‘setalevvas’ one of the first things he ever had custom made, paid for by his wife.

We went to hear the artist Grayson Perry on Wednesday night, he was speaking at another Semple Secrets. He’s a joy listen to as he doesn’t worry about what he says, which is hugely refreshing in this time of ‘brand awareness’ and everyone watching what they say about everything . Here are the highlights…

On what he wore (he was dressed as a bloke)

I don’t know where these clothes are from, my wife buys all my male clothes for me, I want to remove myself as far as possible from the consumer process because it’s so toxic. Consumerism is like a cultural wank.

On buying stuff (just for the sake of it….he doesn’t feel this way about hand made stuff)

We’re all Neophiliacs, addicted to newness through consumerism, we all want to be titillated by a shallow hit of newness.

I’m not going down the face lift route, as my wife put it, no one ever looked more intelligent after cosmetic surgery.

I’m quite looking forward to doing the ‘old lady’ thing, a bit Edith Sitwell, I’d like to like to channel that look big time, with a grey wig, dramatic jewels and no make up.

I do what I call ‘off road’ make up now in the mirror, you know that zig zag line with eye-liner, it’s no longer a smooth drive from a to b, most women get to a point where that happens.

As a transvestite, you get away with a lot if you do it well and put the effort in. I see less and less people in the street really putting in the effort.

On clothes for blokes

For little girls it’s about pink, but boys want to feel they are in a war, so they want camouflage, it’s the man version of pink.

Men need the clothes they buy to be all about function. Their clothes need to have a reference to hunting, hiking, snowboarding or something dangerous. They might have an epulette which looks vaguely like it might be from the army or a high tog Timbuktu mountain jacket to pop down the road and buy a latte in. Men like to believe if there was a war, the boots they were wearing would be all right for it.

On his work as an artist

My job as an artist is to place a lot of emotion in inanimate objects.

I’m quite organic when I work, Usually I start off thinking ‘I’m in a red and blue mood’ so I’ll do something red and blue…honestly, it can be as loose as that. After I’ve made it and I’ve thought about it for three years I might figure what its about. Doing all that reading Baudrillard and suffering is a nightmare way to make art.

I’m heads-down and diligently working towards my exhibition (at the British Museum in October) at the moment. The thing they don’t tell you about being an artist is you have to put in the hours, most of the time I’m working away in my studio, radio on in the background…Radio 4 of course…I like to know my audience.

I always say my job is exercise in controlled disappointment as nothing ever quite lives up to my original fantasy of it.

On winning the Turner prize in 2004

I said to the guys who ran the Turner prize, ‘strap me on and fire the engine, I’m going to enjoy it’ because I wanted to join in and its been brilliant. I like having a voice in the media, I enjoy the dialogue…its fun!

This was the best Semple Secrets yet, but we suspect the next one, with journalist Katherine Whitehorn on Tuesday 29th March, will be equally as riveting. Watch out on the Semple Secrets website for when tickets are available, if it’s half as much fun as Grayson you’ll love it.

I came across the photographer Gabriela Hasbun recently and loved both her stunning images and the stories behind them. The Mission Street series captures the essence of the many small businesses that have provided high quality goods and services in…