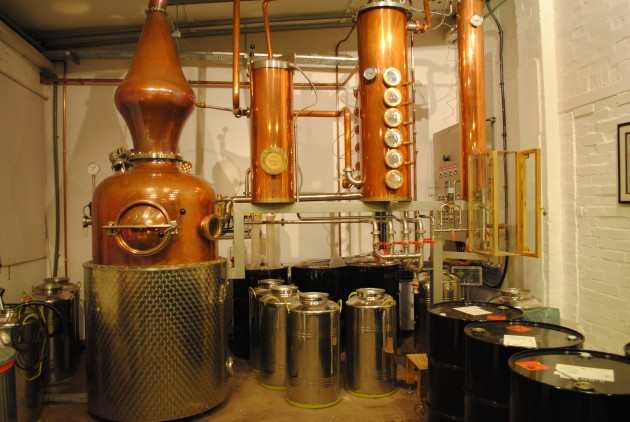 Prudence, the still at Sipsmith, Hammersmith

Gin is having something of a moment in the spotlight, with lots of small artisan distilleries popping up all over the place creating hand crafted gins lovingly distilled in copper stills. There was an excellent Radio 4 programme on the subject over Christmas, and by chance, one of the ’boutique distilleries’ as they are called, is right around the corner from me in Hammersmith. And they do tours. I grabbed my hat…..

Sipsmith gin is one of my favourite gins and its founders are justly proud of having worked their socks off to get the first London gin distilling licences granted in over 200 years in 2009. With what can only be described as impressive determination, they pestered to get the licence (it took two years) then sourced a hand made copper still from Germany (very expensive), applied for permission to build it in what is basically an old garage in a residential street in Hammersmith and took on the giants of the brewing industry to sell a tiny amount of artisan bottles a year.

Sipsmith may be small, but it got it’s timing right, as not only is gin drinking on the increase but they sell the stuff as fast as they can make it. MAD and I did the tour last Wednesday (you don’t actually go anywhere, it really is about the size of a garage, one chap arrived with hiking boots…I don’t know where he thought he was going). We learnt huge amounts, and sipped on G&Ts as we did so, we discovered:

Copper stills create a beautiful flavour because the copper reacts with the alcohol in distilling and removes some of the bad stuff. Big brewers don’t use copper and instead filter out the impurities , which diminishes favour.

The Sipsmith still is called Prudence, it is named after Gordon Brown’s fiscal policy.

The water used for Sipsmith comes from Lydwell Spring, one of the sources of the Thames (back in a field in Gloucestershire) they pay the farmer in cases of gin for the water.

You can smell the different botanics (which all have different atomic weights, so ‘layer’ in the glass) by tipping the glass slightly sideways, a bit like you do for wine. The lighter weight citrus smells will float to the top of the glass, followed by the middling smells of coriander, sweetish liquorice  and the juniper will be right at the bottom close to the gin. 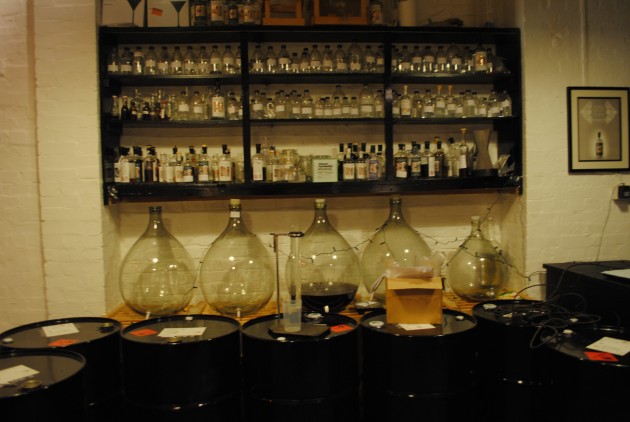 The rather nice ballon jars at Sipsmith, along with assorted distillings

It was great fun, I’d advise anyone interested in gin or vodka to book up and go along, I wanted to sneak one of the gorgeous big bubble jars engraved with Sipsmith (above) home with me, but they were getting ready to soak herbs for the next production of a Summer Cup concoction which they hope will be an alternative to Pimms.

The website has a ‘seasonal cocktail of the month’ which might come in useful should you need to come up with a fancy drink at short notice, and the tour can be booked online too (it costs £10 a head, it’s pretty easy to drink this back in vodka and gin, so perhaps don’t drive) although it is very popular and gets booked up quickly.

There are more boutique gin distilleries around now, a lovely one in Highgate, North London is Sacred and Martin Miller does a Gin Masterclass, where you also learn how to make a good martini as well as learning about gin. Once everyone’s over their January abstinence, we’ll look into more artisan alcohol production as it’s clearly a bit of a trend, all in the name of research, obviously. 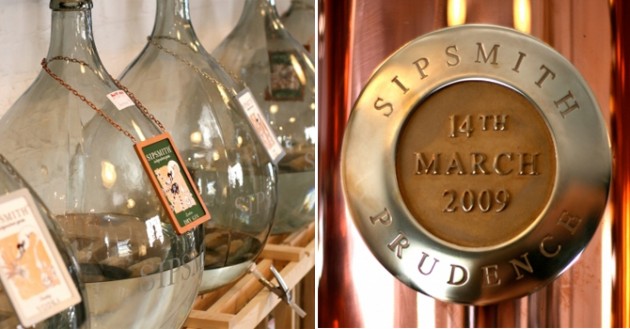 If you’d rather clean the toilet than think about another evening meal, but find the formidable list of ingredients in most cookbooks deters you…