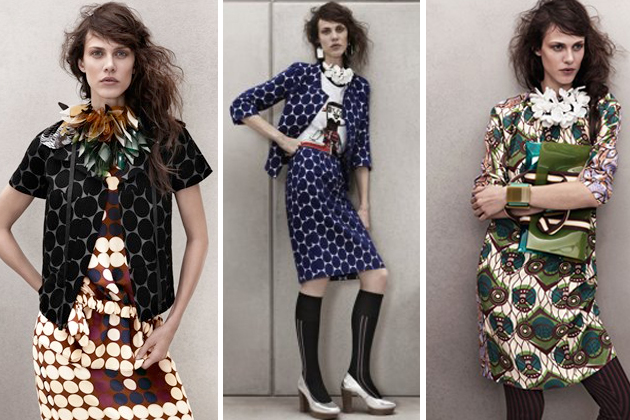 On Thursday morning Amanda and I were up bright and early in order to be at Westfield for the madness that was predicted to be the launch of the Marni for H & M collection.  I have to admit to feeling a little bit old and slightly desperate, as I grabbed a coffee along with the Olympic construction workers and security guards at 8am. They seemed to be the only people up and about and I wondered if the hysteria on our Twitter timeline and my Facebook page, meant the queue would be full of middle aged fashion designers, architects, trend forecasters and stylish Japanese people – rather like the Commes Des Garcons for H & M launch.

On arrival, we were greeted by a chirpy shop assistant who handed us a wristband and told us to come back in half an hour. Fantastic, no embarrassing queuing, with the potential for middle aged stroppiness to creep in.  We had both been online and already had an idea of what we wanted to buy, and years of trawling round shops all over the world (sounds glamorous, but believe me it’s not – it’s why I hate shopping!) meant within seconds of entering the shop I had most of what I wanted, well within my allotted 10 minutes. Annoyingly they didn’t seem to be replenishing sizes in between new groups of shoppers, so I ended up with a jacket that is a little too small. But otherwise it was a very organised, not altogether unpleasant experience, with no fights breaking out over the geometric jewellery! 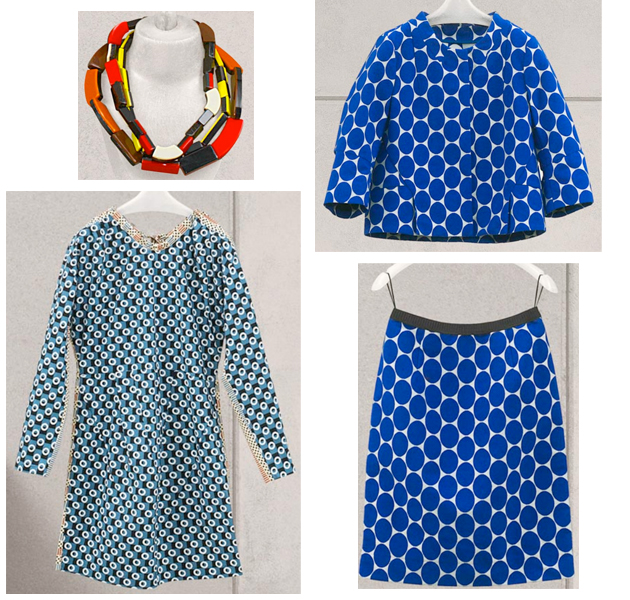 The range was as we expected, perhaps even a little bit nicer. The over size spot jacket and skirt that I bought are in the fabric I had imagined and the jacket has some really nice seam detailing – exactly I would expect from Marni. The mis matched print dress I bought, is good quality poplin and has nice tight fitting sleeves. The styling would suit more or less any body shape and the price points, although higher than Hennes, were a lot less that Marni, so it worked for us. In fact it was a bit like a more eccentric version of COS  – who are often more than a little “inspired” by Marni, Helmut Lang and the like!

Sadly there seems to be nothing left either in the shops or online, but there is sure to be lots on eBay if you are keen to buy. 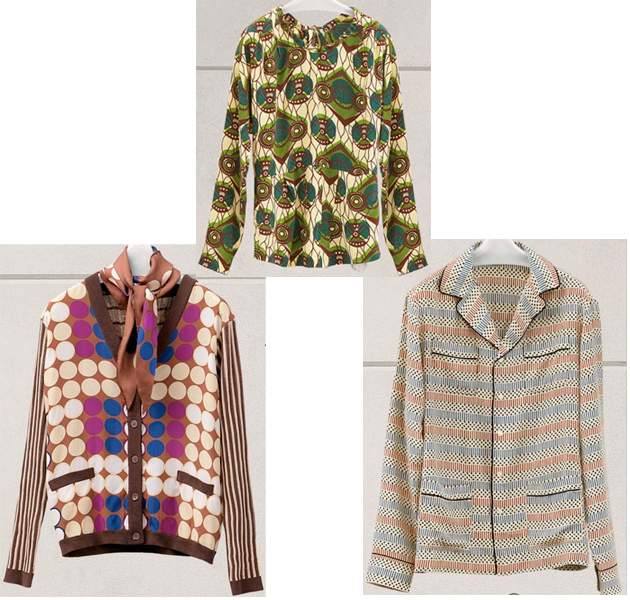 I am always fascinated by watching the other customers as fashion events (queueing is great for this) and was interested to see quite a few of the people buying the range, didn’t look like they would ever wear an A line Playmobil style spotty coat. Perhaps they were buying  to sell on EBay, or maybe they were attracted to the thought of buying a cheaper version of a “label”. Amanda and I went along simply because we love the Marni hand writing and would have bought this range even if it had had an H & M or an M&S (theres an idea?) label in it.

Buying a ‘label’ even if you don’t love what the brand do, is a concept I don’t understand and feel saddened as I see more and more people buying into the idea of head to toe designer dressing. Even some of the young fashion students I have taught, aspire more to labels than individuality. Surely true style comes from mixing Prada with Primark, something your mum wore in the 50’s, accessorised with a bit of fabric you bought on Shepherds Bush market. Isn’t it about mxing up what you’ve found and creating your own look, rather than buying someone elses version of it?

I wonder if these designer/high street collaborations open up the world of designer fashion and make it more inclusive, or do they encourage a culture of unoriginality and the cult of the label.

Biba fans, there’s a new book out and it’s by Barbara Hulanicki herself, together with Martin Pel. I flipped through it quickly the other…