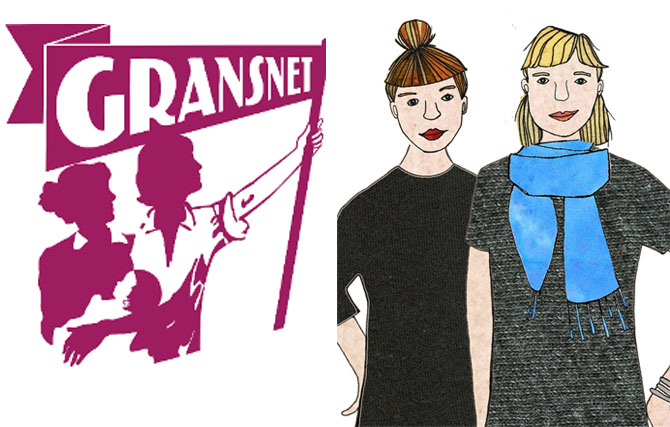 Yesterday we were thrilled to be invited to do a guest blog for Gransnet, older sister (mother?) of Mumsnet, which despite its slightly ‘ageing’ name has good discussions going on about many issues relevant to older women (and a nice video of Alan Bennett at the time of writing).

We thought it would be fun to do a ‘proceed with caution’ list of what fashion trends might be best avoided once you reach a certain age, mostly in light of the fab discussion we had on Twitter with out followers on the whole subject of peplums. And boy, did we stir things up! We are thrilled to report that our post was the MOST commented on (I think) ever on Gransnet, although admittedly not everyone thinks we got it right, or anywhere near in fact….some of those Grans are FIERCE!

Here’s what we wrote, do go onto Gransnet and view the forum board here and join in the debate, or add a comment below and let us know what you think.

My friend Jane and I write a blog about fashion. Inspired by the preponderance of peplums* at last month’s London Fashion Week, we’ve put together a list of the top twenty things that you should never think of wearing.

*Note – peplums are those oversized flippy-waisted frills or ‘over skirts’ that you see attached to fitted jackets, tops or dresses. They are NOT good. When Jane tweeted that they are “crimes against both fashion and women” our followers agreed unanimously and helpfully added examples of other fashion disasters that keep being reinvented. Hence the list.

We’re all a little older and wiser and (often) remember the look from the first time around. That’s the small advantage of age of course – we’ve LEARNT things and, having already played with these retro fashion moments in their original incarnation, we understand which ones should be firmly left in the closet. This is called making a grown-up decision. Being fashion girls, Jane and I have been experimenting with trends since before the word got invented. We admit that we’ve tried everything and anything that fitted the fantasy look of the week, from Annie Lennox androgyny to full-blown Culture Club New Romantic flounce-with-attitude. From punk to yes, peplums. We’ve been through it all and we have learned what works. Peplums don’t.

You may be able to persuade a young lass of twenty-something a gypsy top is the essential hot item for summer – but try it on a woman who sang along to Bananarama wearing one back in the 80s (or, worse still, a woman whose daughter did…) and it’s going to cut no ice. This has nothing to do with us feeling that we shouldn’t wear a style because some draconian fashion maven has declared we are “too old” for a trend – we’re all for dressing how you like as long as you make an effort – it’s just that we’ve done it already and know how wrong it can go and experience tells us not to touch it with a bargepole now we’re a little older wiser and (sigh) perhaps a little plumper too.

Hence our “Proceed With Caution” list for fashion trends. Deviate from it at your peril!

Starting with anything baby related now we are all old enough to have had our own, first on the list is the bizarre but horribly popular onesie, which should be left to those unable to change their own nappies, also dungarees (hello, we’ve got bosoms!) and anything with a large sailor collar (ditto, although we’re partial to a nautical themed jacket)). We’ll also add any style that adds extra bulk, 40 years of generous eating has done that, thank you, so abundant frills (peplums we are looking at you),  puffball-ish hems (it didn’t look THAT good the first time around) hot pants (gorgeous on the under 25 but dodgy with knee wrinkles), jeggings (too much information, thanks) and cropped tops (like we’re showing our undulating, pregnancy-scarred tummies to anyone!)

Jane added heels with long skirts, because ‘it’s just wrong’, as well as dangerous (anyone who hasn’t read Jane’s tale of wearing a maxi dress for a day should head here immediately). Our tweeters insisted we add high street lace (cheap), racer backs (our bra-less days are looong gone), drop waists (frumpsville) and cargo pants, because we’re just sick to death of them.

I have banished anything made from leatherette (just nasty as well as being a sweat factory when mixed with a menopausal hot flush), trainers outside of the gym (try harder everyone, please!) and peter pan collars (leave it to Alexa Chung). Jane and I would both add heels because life’s too short to stumble and we’re always running to keep up but that could just be us.

We’re also including ponchos (plain daft unless you’re armless or from Peru), culottes (compromise dressing) and leather trousers (just NO). We’re undecided about wrap dresses (popular but surprisingly difficult to pull of, despite what Diane von Furstenberg might day), Uggs (ugly, but essential winter yoga footwear for quick gettaways after class) and too much cleavage ( I say ‘if you’ve got it flaunt it’, Jane says ‘NO’).

We’re currently in talks with retailers about developing a Proceed With Caution stamp we can print onto labels so everyone’s clear. What do you think, did we leave anything off the list?

Remember ages ago we told you about the cult ethnic dress trend made popular by Ukrainian designer Vita KinVita Kin. Previously only sold via her Instagram…