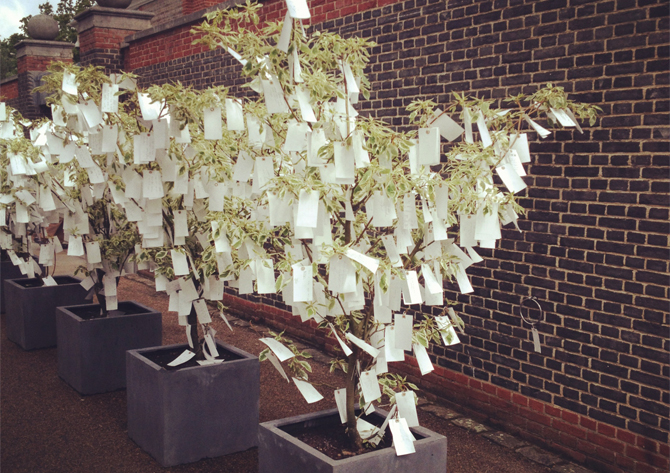 As the Olympics draw closer, the tubes are full to bursting with new visitors, more roads close daily causing traffic madness and there’s an hysterical running-out-of-time feel to the roadworks, but on the bright side, London’s cultural programme is incredibly inspiring at the moment. I’m not sure if everyone has raised their game due to the double whammy of the Jubilympics but there’s some good stuff on.

At the Serpentine Gallery, Yoko Ono is showing To The Light, a retrospective of sorts, with a curated selection of her work (some of which is 50 years old) which have ‘the strongest vibration to take us to the light’ according to Yoko, including these uplifting Wish Trees at the entrance to get you in the mood. 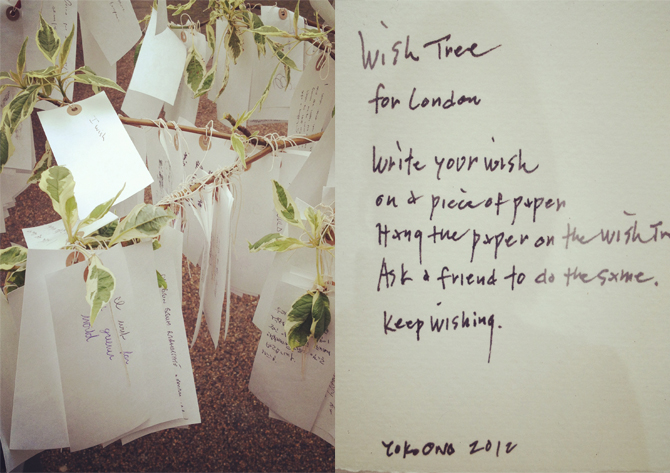 Yoko Ono’s wish tree, close up, plus her instructions on how to wish

Yoko’s work is hopeful, loving, feminine and uses lots of stationery….not just with the (nice quality) luggage tags for your wish, but in the work Where Do You Want To Go, you can leave a pencilled note for Ono telling her your plans, which she’ll use in a future piece (pic below). She also writes a narrative in pencil around the walls and she has nice, non-joined-up writing .

Her work brings out the happy hippy in me, I love her messages of peace and hope and her easy to grasp conceptual ideas, from the seductive Film No 4 (Bottoms) video to the Box of Smile from 1967, it’s stuff I’d actually like to own.

Cut Piece, both the 1964/1965 and 2003 versions demonstrate how forward thinking Ono is, she is videoed sat calmly, allowing visitors to cut bits of her clothes off in an intimate but moving expression of trust that I found mesmerising. She was inspired by her parents, who apparently were always filming her and her brother when they were growing up in Japan.

Her consistently hopeful and positive message seems a good one to adopt currently, you have to remind yourself that she’s been singing the same song since the mid 60s, it’s as if  we seem to be just catching up with how good she is, or perhaps its just me being slow to appreciate how relevant her message of hope and peace have always been.

The perspex maze work, Amaze is a little unsettling, you want to hold the almost invisible walls to just check there’s something there. This is me below tweeting my arrival at the centre.

Tweeting from the centre of Yoko Ono’s perspex maze 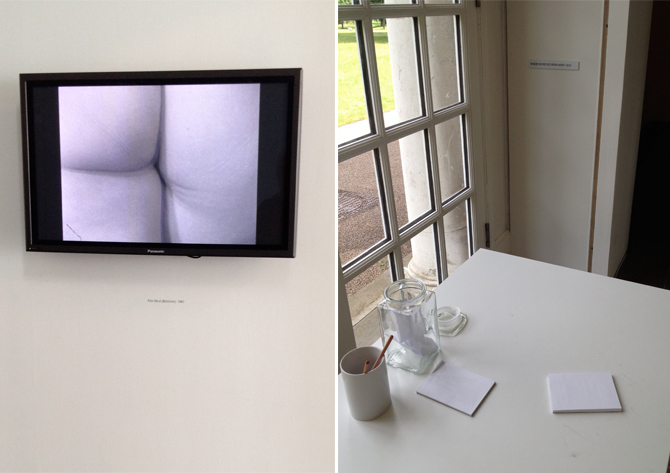 Film no 4 (Bottom) left and Where Do You Want To Go, right

The show is on at the Serpentine until 9th September and it’s free. When we went the #Smilefilm idea, where you can leave an image of your smile for Ono who is collecting them from around the globe, wasn’t working but I have found out I can just watch this and do it via Instagram.

If you go you can also see the Ai Weiwei and Herzog & de Meuron pavilion, which is a cork lined, water -roofed place of reflection, the perfect spot to contemplate Yoko Ono’s art.

Once again, most images here were snapped illegally due to restrictions inside the gallery, but really you are best to go and see for yourself.

It’s summer holiday time here at TWR, Jane and I are off on our annual summer break for a bit of R&R, we’re back…