As we all know, finding footwear we like is a challenge. Too old to carry off creepers (much as I’d like to – but one look from teen daughter said it all!) and too stroppy to wear heels, means that shoe shopping has become somewhat of a trial. I’m pretty much restricted to men’s brogues, Grenson boots, Blundstones for dog walking, Birkenstocks, Superga and Converse – and even they are becoming a little bit “old hat.”

Shoes are such a great way to update your look, as popping on a pair of this seasons “it shoes”, with last seasons (is it just fashion people that talk in seasons?) outfit, instantly says “Spring/Summer 2013” not Autumn/Winter 12. Okay, okay, I know this is all total fashion bollocks, but you know what I mean. Shoes and bags are the things I don’t mind spending money on and generally I tend to seek out footwear that I love, rather than what’s fashionable, meaning I wear them for years, rather than months.

Heels as you know are something I struggle with, they don’t suit my clothing choices and are just downright uncomfortable (and make me walk like Dick Emery!). But there are occasions when one wants/needs a little more height or added glamour and up until now, this has meant tottering (don’t you just love that word) around in WAG type heels, or steadfastly sticking with your men’s brogues and feeling like someone’s rather butch spinster aunt, at a family wedding.

But this Spring Summer, the footwear designers of the world have come up trumps, by deciding its time to bring back the nan heel. Remember those shoes your mum wore with a maxi dress, while wheeling out the hostess trolley filled with vol au vents in the 70’s? Those are the block heels we are talking about. Not only are they stylish, they are also comfortable – at last a heel we can wear without feeling like we are in dressing up clothes!

I am loving the Marni sling backs (obvs) above, for that 70’s, colour blocked look and will be spending a lot of time in Selfridges in my lunch hour battling with my conscience, as they are ridiculously expensive at £430 for the gold heels and £420 for the yellow heels. 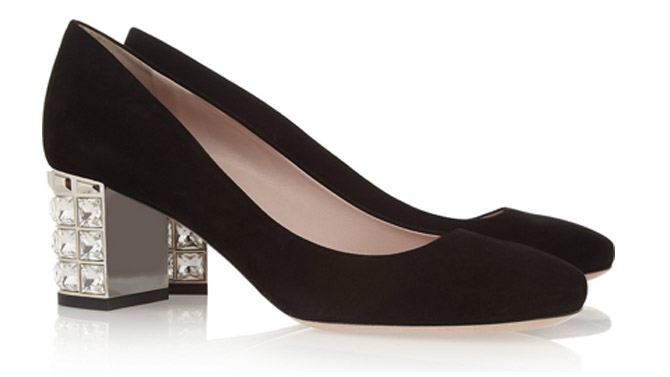 These crystal embellished heels  from Mui Mui are completely out of the question at £550 and £590 and would only be a possibility if you were say, getting married – come to think of it, it might be worth getting married again, just to be able to wear them! 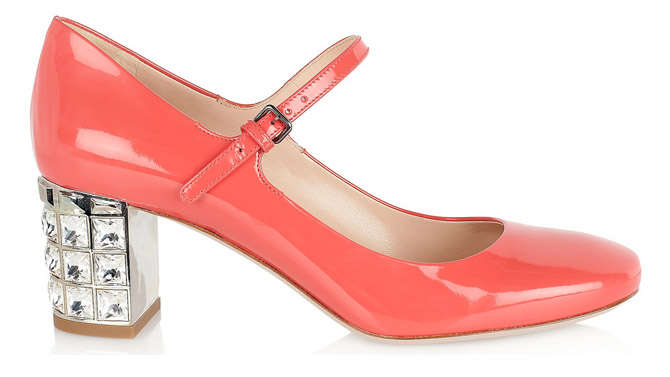 Marc Jacobs (love him, he makes a lovely shoe!) featured the mid height heel in their Spring/Summer 13 show and we all know that whatever Marc does is sure to be massively influential on the high street, so look out for versions of the pointy toe, mid height, Mary Jane in the shops soon.

The nicest, most reasonably priced pair I have found so far, are the Edie Heels by Boden for £99. They are not exactly cheap, but £300 cheaper than Marni and Mui Mui, so therefore you are actually saving money!!

They come in Navy, Bright Orange and Champagne Pink. But be quick if you like the look of them, they were also featured in yesterdays Guardian Measure and are bound to sell out fast. 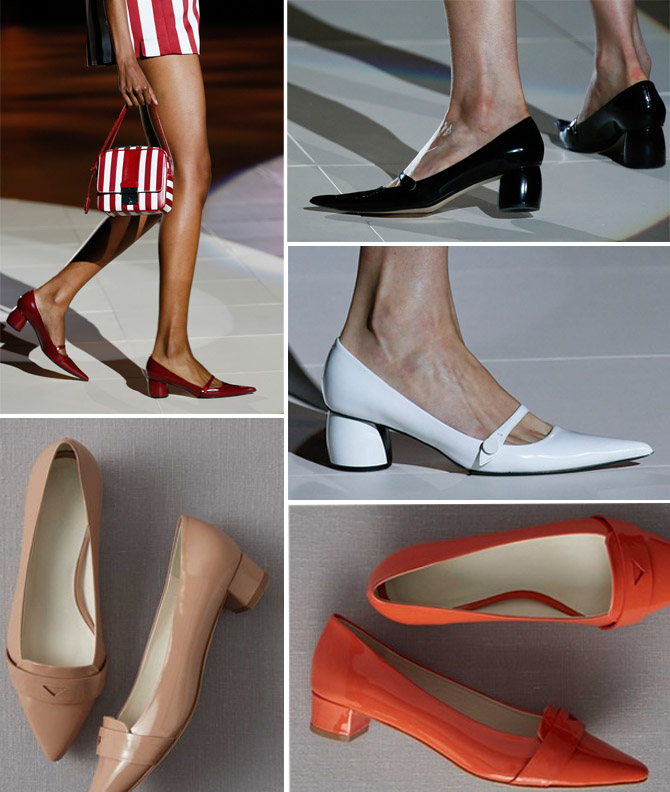 When I tell people where I live, I get two reactions, the first is a kind of guarded horror, quickly followed by a concerned…