What an awesome day we had yesterday with Suzanne Lacy and her Silver Action art performance piece at the Tate Modern Tank space, where 400 women of 60 plus came together to have a huge conversation about their lives as feminists and activists.

Jane and I sat in and recorded inspiring conversations that covered everything from leaving abusive relationships in the 60s when there was little support to the frustration felt over today’s young girls who feel they have nothing they need to fight for!

It was a privilege to listen and our role was to tweet out the conversation to a bigger audience in (we think) the first artwork that has integrated real time social media comment into its content, Suzanne will be curating everything the 20 bloggers and tweeters said in a future piece that will embrace everything that happened on the day, a little like the Crystal Quilt project (as we understand it). So TWR is officially a work of art…just call us multi-taskers….

Anyway, thanks for all your replies to our tweets, for those that weren’t able to follow the event, here’s a snapshot of some of the conversations we listened to….

”Of course I’m still an activist in my 60s! I keep promising my family I’ll spend more time with them but I never seem to’

‘How do we make activism part of our everyday lives, when structural inequalities still exist in so many institutions?”

‘I’m still in the Communist party, really to make sure it understands that feminism is important, it used to be seen as a deviation from the main story but it is slowly being appreciated as an important factor’

‘Housing issues for older women are worth fighting for today as women are living longer and no one want to go into a home.’

‘How many women out there need help but are too proud to ask?’

‘Women want community based housing that lets them remain independent. My elderly mother was outraged that a doctor had to sign her off as ‘fit and capeable’ to live on her own in sheltered housing as she resented the intrusion in her otherwise active life.’

‘The austerity regime is stripping older women out of the work force’.

‘Affirmation for good work is important, it’s not about fame, but doing things in a quiet way, that’s the way to change things’. 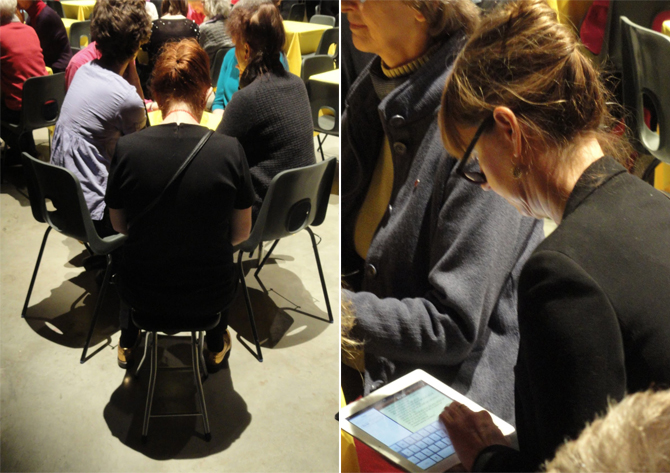 Us in action, tweeting and recording

‘I like not being public property any more, not having blokes comment on my bum or boobs, it’s a big relief ‘.

‘When I returned to The States in my 50s, no one wanted to hire me even though I had 30 years experience.’

‘I live inTottenham and we have rubbish street lighting, when we’re older we can’t walk so fast and we feel intimidated in the dark.’

‘The secret of surviving when older is to have younger friends.’…. Also walk absolutely everywhere and get a dog (or a cat as @thevintageyear and @sarah_males reminded us via tweets)

‘I was made redundant at 50, I decided everything I had done previously was a rehearsal for what I was going to do for the rest of my life.’

‘People think of older people as a close age group, but covers many ages, from 60 to 100’.

‘Freedom Bus Pass a much loved lifesaver for elderly, if you can’t afford anything else you can always go for a bus ride’.

‘The great thing about getting older is deciding you may as well go for it’.

‘The world’s your oyster in your 20’s, but you’re too full of insecurities to appreciate it’.

My father wouldn’t let me go to university, he said my mother didn’t go so I didn’t need to. I eventually got to go when I was 60′.

‘On my first day in my job leading team of academics in the 70s, I was the head of dept, leading a meeting but I was asked to pour the tea and ‘be mother’ because I was a woman’.

‘Sport is an important arena for feminism still, female tennis star (Gussie Moran) recently had an obituary in leading broadsheet written almost entirely about her knickers’.

‘I was turned into activist  working for the BBC in 70s, at my interview to be a makeup girl i was asked if I had boyfriend because it was preferred that my boyfriend should come from within the BBC to encourage a family style commitment to the organisation but also that I should pamper and look after the stars and to be ‘available’. Also we were referred to as ‘powderpuff girls’ –  we were only called make up ‘artists’ when we were very senior.  We were treated very badly, we weren’t allowed taxis home whereas male dressers were. Eventually l led my girls out on strike for equal rights but I was never hired again.’ 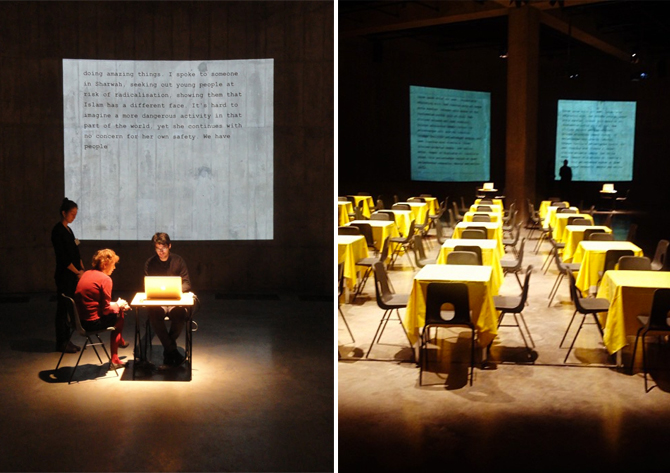 women having their stories transcribed onto the screens in the Tanks, emotional stuff it was too.

“Girdles were worn by good girls, if you didn’t wear one you were considered ‘open’ and something of a hussy.”

“When I started teaching women had to wear skirts, trousers were just not allowed. And I taught in the deep south (USA) where it got hot but we still had to wear thick stockings’.

Do read more on Tate Modern’s website for the event, and let us know your thoughts on what we heard.

It was Arcadia press day this week and we were thrilled to see Wallis looking so VERY on trend for next summer (possibly more than some of the hotter younger labels in the Arcadia stable, but we’d better not say…