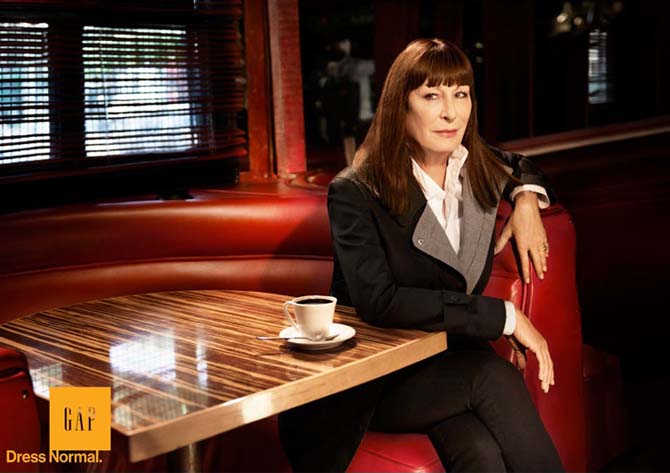 I mentioned earlier this month about how big brands were starting to use older models in their all important September advertising, well looks who turned up in the Gap campaign… The awesome Angelica Huston. The adverts, entitled Dress Normal, are pretty star studded, featuring Elizabeth Moss from Madmen and Zosia Mamet from Girls amongst others, but it’s the properly grown up Angelica we’re thrilled to see. If anyone could kick ass about making sure older women were represented in fashion, it’s her.

If you still haven’t read Angelica’s early-life memoir A Story Lately Told, hurry and add it to your holiday reading list, it’s a moving and engaging read and it doesn’t even get to when she met Jack…I can’t wait for Part Two when I assume he will put in a much anticipated appearance.

We’ve been watching Gap for signs of improvement since the ex COS designer Rebekka Bay took over the helm back in 2012 and there have been glimpses of a return to (long ago remembered) form. There was the floral indigo dress recently, which I liked a lot and I’m impressed with the current range of easy lightweight T shirts and vests too. Friends have been mentioning how they’ve found one or two useful and chic items within the collections recently. Exciting news all round. When was the last time you bought something from Gap?

Men’s grooming, as you will all know by now, has changed beyond all recognition over the last decade. Blame it on the metrosexual (a…