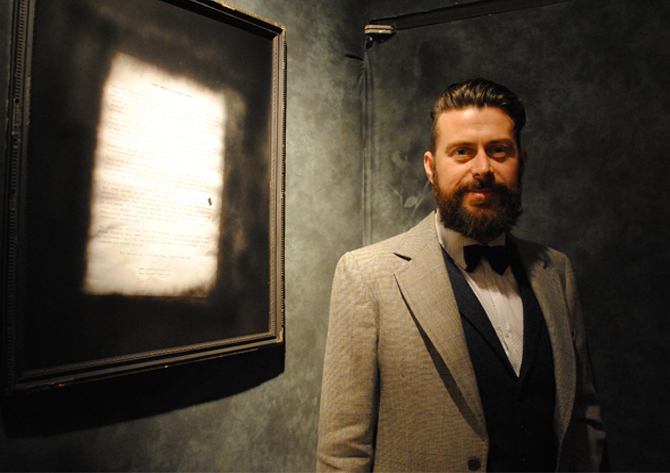 Mr Finch is an unusual chap. He started life as a jeweller, then moved into being a textile artist because he wasn’t really enjoying it that much. Hailing from Yorkshire and with a jolly demeanour, he is a dapper dresser with a great enthusiasm for his slightly dark animal and insect creations. ‘I’m never making another one of those foxes” he tells me at the launch party for Cinder Embers his Christmas pop up store at Anthropologie Kings Road, ”I nearly lost my hand and fingers to it, it was so hard to sew.”

The Mr Fox he’s talking about is the size of a human and looks menacing, even thought he is made from calico. This debut exhibition from Mr Finch features creatures inspired by the French taxidermy store Deyrolle, which burned to the ground in 2008 leaving a trail of sadly singed creatures, many of which were captured by photographer Laurent Bochet.

You may remember Mr Finch’s moths from when we have written about his fabulous work before, but this time he’s introduced swans, gold spiders, dancing mushrooms and an elegant toadstool, complete with a weekend-away suitcase. All are slightly charred with a darkness that comes through both in colour and in the alarming manner in which they look at you. 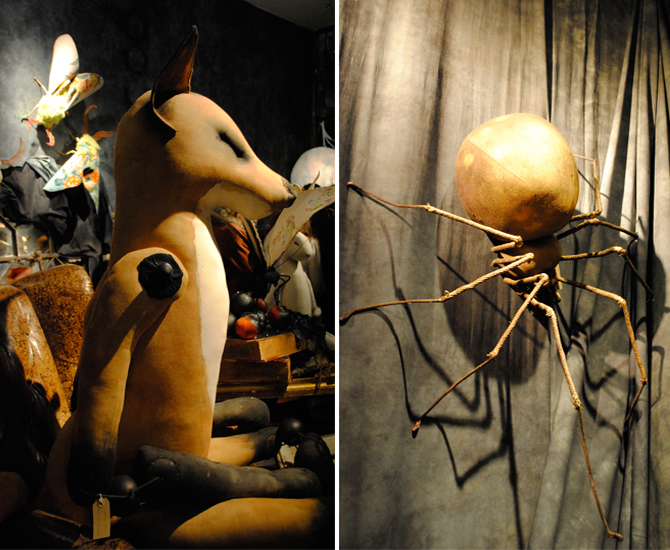 There is a beautiful book, illustrating his creations so far. “it’s really a portfolio of work’ he continued, as he flipped through the delightfully odd menagerie of creatures and it’s a must -buy for anyone who loves this area of the creative world. For those who don’t fancy committing to the book, the Mr Finch Tumblr is a good alternative.

I love speaking to Mr Finch, love entering his fairytale ‘world’ of make believe. Anthropologie has done an excellent job of recreating the inside of his head with Cinder Embers in its Kings Road gallery space, all dark and mysterious with plenty of insects, animals and other oddities. It’s really designed for adults but I suspect that this little world would appeal to certain kids too, makes a nice Christmas alternative from Santa’s Grotto. Mt Finch’s beautiful book can be bought here, and the Anthropologie Cinder Embers pop up featuring his work can be found on the Kings Road in London and is open until 4th January. 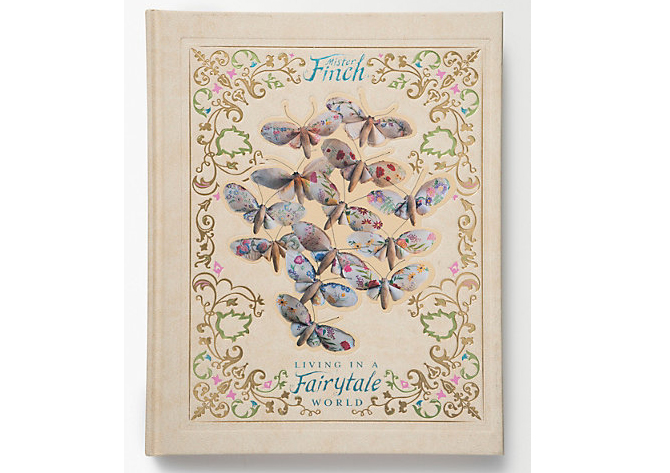 Oh blimey, now I remember why I don’t put myself in front of the camera much. Here’s the Activia Feel Good Pledge video my…