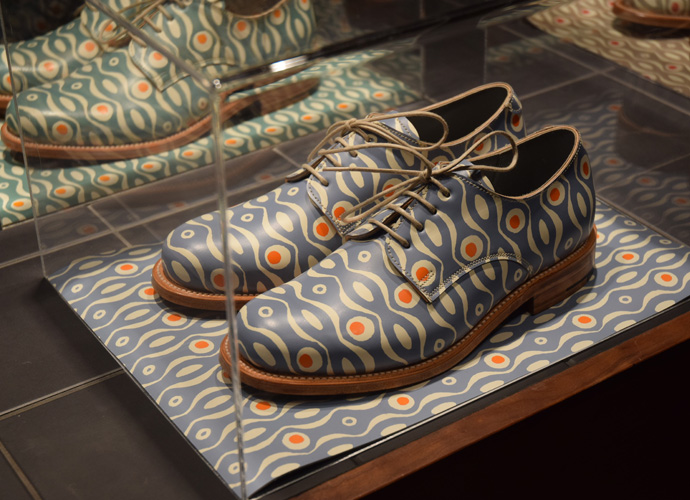 As if to torture me on my year of buying nothing new, Grenson has collaborated with Persephone Books to create a delightful printed Derby that is the perfect smart summer shoe. Not only is it available in the softest of mid tone colours and a delightful mid-century inspired print, but each pair comes with a Persephone book. Elegant, erudite style at its very best. 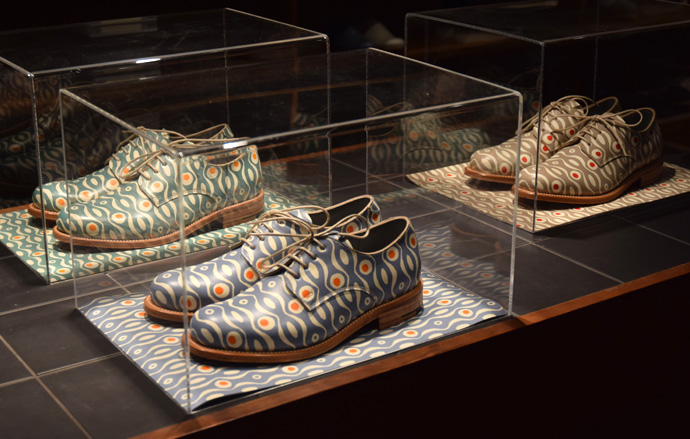 Regular readers will know my addiction to Grenson. But for anyone who doesn’t know Persephone, it’s an independent publisher of  20th century women (mostly) authors, founded by Nicola Beauman. The books – which are all a delight, I’m yet to read a duff one – come dressed in a chic, plain, Persephone grey cover, so you are not influenced by a picture when you select, although each one has an exquisite and unique end paper to satisfy any creative urge. 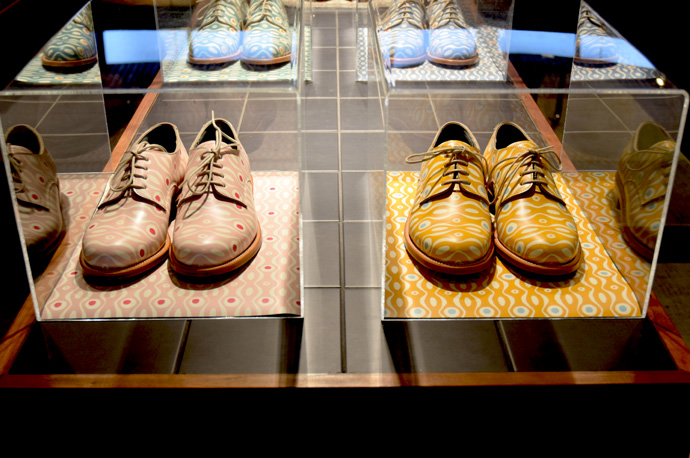 The shoe has been made as a very limited edition of only 100 pairs, so you’ll need to be swift if you fancy purchasing. 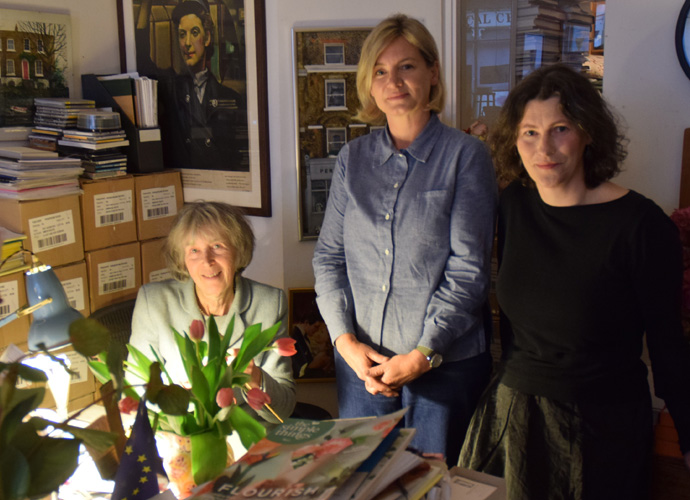 I caught up with Nicola, Julia Little from Grenson, Claerwen James the textile artist and co founder of Cambridge Imprint and Lydia Fellgett, Persephone’s general manager at the launch last week, to discover more about the collaboration. Also, any excuse to go to the cosy Persephone Lambs Conduit Store – where an invigorating Madeira is sometimes consumed at closing time – is hard to turn down.

Julia, how did this Grenson x Persephone collaboration happen?

Julia. “It originally started with Tim (Grenson’s creative director) telling me he’d found a really reliable way to print onto leather, which was very exciting.  He knew that I loved print, particularly mid century prints and asked me to see what we could do with this idea for women’s shoes. I was thinking about it while at our Lambs Conduit Street store and of course thought about Persephone Books. I love the store and I’ve always bought lots of books with those great end papers and I always use the diary, so thought it would be brilliant to do a shoe collaboration.

So we did some tests and looked at shoe designs – originally we thought about doing the pattern on the inside of a regular Derby shoe. But once we’d discovered the fantastic patterns from the Cambridge Imprint company, we realised it had to go on the outside. When we had a few samples, I came over to the store and over tea in the shop with Nicola and Claerwen, they kindly  agreed to go forward.”

Nicola, how did you feel when Julia came up with the idea of a shoe collaboration?

Nicola. “I felt incredibly happy. There’s an empathy in Lambs Conduit Street among stores, the fact we were both in the street was crucially important, it probably wouldn’t have happened otherwise.”

Julia. “Actually, I’d probably have sought you out, I’m such a Persephone fan…”

Nicola. “There’s a kind of camaraderie in the street, I would have said ‘yes’ whatever. And I love those kind of shoes, I only wear those kind of shoes so I was happy for any end paper to be used. But then Claerwen’s print, from Cambridge Imprint, seemed the most appropriate to use and that print isn’t really an end paper print, it’s used for wrapping paper, notebooks and boxes. The end papers are always the same date as the book its published in. But Claerwen’s print is the most wonderful print, it’s called Persephone because it evokes us, it’s contemporary but it’s also very Bloomsbury.” 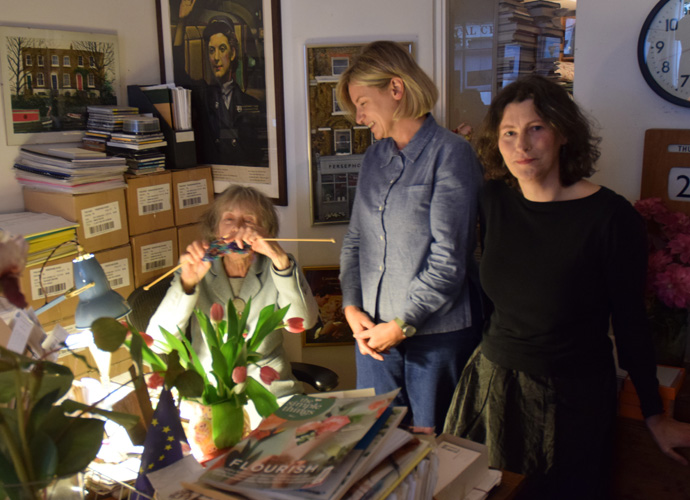 Claerwen. “It’s very early 20th century isn’t it? There were lots of references that seemed appropriate the second I made it. Oddly, I printed it for the first time in grey, which is Persephone grey and I instantly thought it would be a perfect print for Persephone Books.”

So you didn’t have a brief from Nicola when you first designed the print?

Claerwen. “No, it was coincidence that it turned out like that. I sent it to Nicola and said, I’ve just made this and it seems to me it should be called Persephone, what do you think?”

Nicola. “The most extraordinary thing is, if you imagine sitting down and trying to design a paper, which is beautiful and original, you wouldn’t think there was anything new in the world to design. When you think of all the fabric and paper designs there are already, millions! Yet Claerwen works quietly in her study and came up with something new. It’s riveting, how does she do it?”

Clairwyn. “I make lots and lots of utter failures and then occasionally lightening strikes and something good happens!” Is this the first time one of your prints has been used on a shoe?

Claerwen. “Yes, it feels delightful!  We really make  paper and things made out of paper, so I was really skeptical that you could make the colour matching work or that it would have same feeling, but it absolutely does. And the way the pattern is situated on the shoes, the symmetry, the way the stitching lines up under the print…Every size made needs a different pattern to make sure the print matches up properly, the craftsmanship is amazing.”

Julia. “It takes twelve weeks to make a pair, six weeks for the printing of the leather, including the sealing and finishing of it and then six weeks for it to go round the factory, for each stage on the production line.” 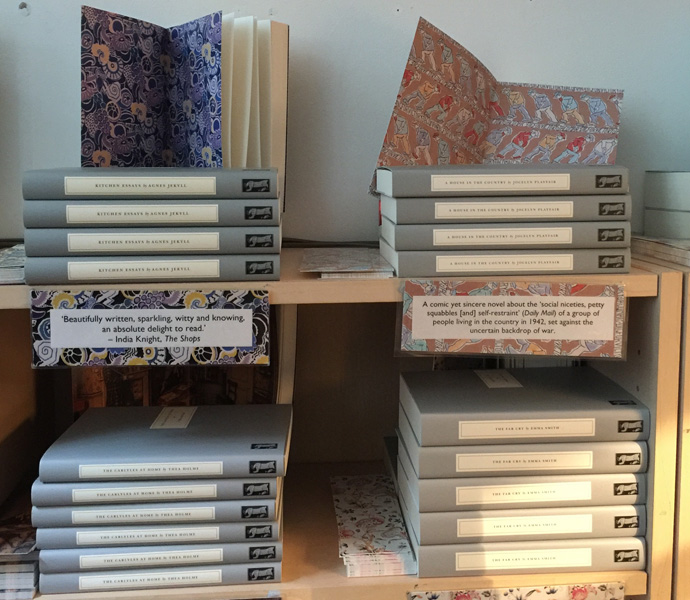 So what books should we all be reading while we wear them? Is there a Grenson x Persephone reading list?

Nicola. “Well, each pair of shoes comes with a book and we’ve been discussing today which one it should be. My first choice was High Wages by Dorothy Whipple, because it’s set in a shop but Lydia said the title’s a bit weird and it’s ALL about the title.

Lydia. “We’ve decided on The Woman Novelist and Other Stories, by Diana Gardner, because they are brilliant short stories from the 40s, and Diane Gardener was in the same WI group as Virginia Woolf. Then we’ve picked The Expendable Man by Dorothy B Hughes, to indicate the broad range of Persephone Books. It’s an early 60s Noir thriller set in California, about a man who’s driving home in his white Cadillac and he picks up a hitch hiker, a young woman and then everything unravels. It’s a really important political book as well as a really good novel.” 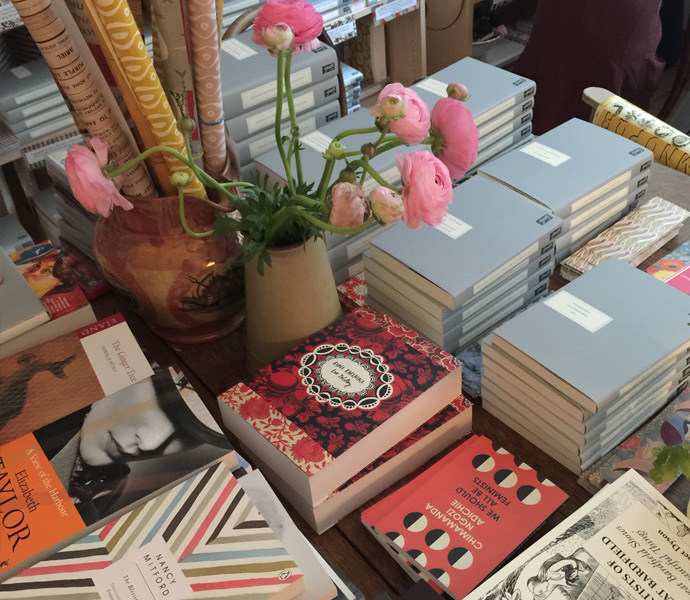 Lydia. “And finally a 1930s cookery book called Dinners For Beginners, by Rachel and Margaret Ryan, which has a particularly lovely end paper which is possibly the closest to Claerwen’s Persephone creation.”

The limited edition shoes are available to buy here. If you visit the Soho Grenson store, the following titles are available with each pair: Dinners for beginner, No Surrender, The village, The Shutter. At the Lambs Conduit Street store: The Shuttle, The Expendable Man, It’s Hard to be Hip and Over Thirty, The New House.

More on Cambridge Imprint here and Persephone Books here.
PS, Julia has told us that the styles are nearly sold out, so for a little more Grenson inspiriation, here’s a few of our favs from the main range.
[show_boutique_widget id=”600641″]

Our New York correspondent Elena Bowes has rounded up some exciting cultural happenings in the city this autumn, just in case you are visiting,…