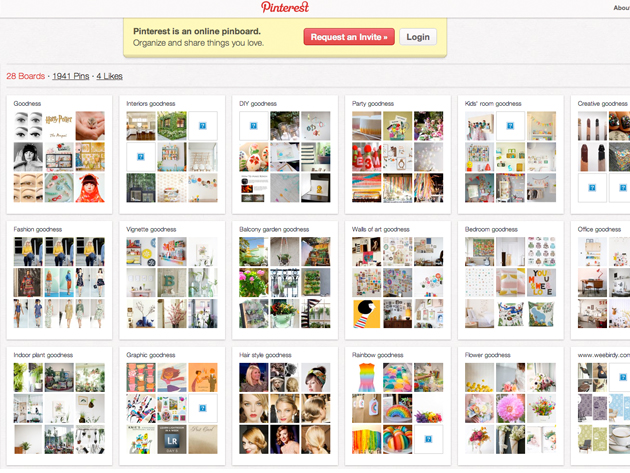 So Twitter is the new Facebook and Tumblr is the new way to blog, are you keeping up? I have lost count of the number of times I have explained the point of Twitter to non believers and quite frankly if you think it’s all about people listing what they had for breakfast, then it’s probably not for you! But there can’t be many people left in the world who don’t embrace at least one type of social media – can there?

We love all forms of social networking and as trend forecasters find them invaluable for keeping up with what’s going on. I also constantly save images of things that are inspiring me and find it’s hard to keep track of everything  – until now. Pinterest is a great way to save images straight from the internet, or upload your own images and keep them in relevant folders, like online mood boards. You can also follow other peoples images,  re-pin them to your own folders and vice versa. Tumblr works in a similar way, as it is all about posting images, but it’s more of a blog format and anyway it’s the hot new thing for the teens – so I’m keeping well away!

Pinterest is great if you are a designer or creative who uses a lot of images in your work, a blogger, or on a more personal level it’s brilliant for keeping images of things like interiors ideas, hairstyles you like or craft ideas etc etc.  But beware, once you start, it’s like any form of social networking, it’s addictive!

One of our favourite sites Stylelikeyu launched 2016 with a video about Cathy Cooper as part of the Whats Underneath project. Cathy is a rebel who battled a heroin…