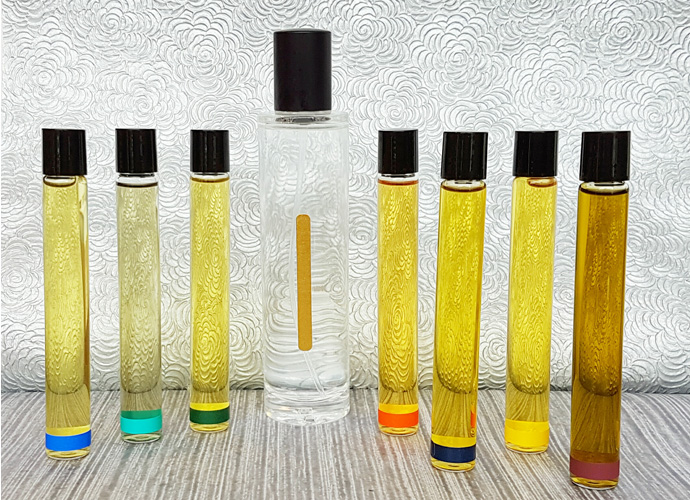 As regular readers will know, I took a left turn into the world of fragrance not long ago to write We Wear Perfume and specialise in fragrance trends (yes, there is such a thing) as well as fashion.

One of my biggest problems with the perfume industry is the way the consumer is hoodwinked with false information around the ‘natural’ and ‘synthetic’ ingredients debate.

There is still a misunderstanding about how naturals must be ‘better’ than synthetics when in fact it’s often the complete reverse. Natural essences are made up of hundreds of molecules, many of which are allergens and irritants, where as synthetics are often one molecule, tested to within an inch of its life and unlikely to cause a skin problem. Sarah McCartney, from 4160 Tuesdays claims that many synthetics are as safe on the skin as tap water.

Naturals are beautifully complex because of all the molecules, but a single synthetic can also be amazing. Naturals are harvested from plants, some of which are endangered species (sandalwood- looking at you) whereas synthetics are a sustainable source of often very beautiful versions of the same scent. Some naturals can’t be captured – lily of the valley being one – whereas synthetics do a very good job of replicating (Diorissomo anyone?). Citrus oils such as lemon and orange are designed by nature as an insecticide to keep the plant safe from bugs. the essential oils can cause skin to rash-up, even though they are 100% natural.

I totally understand why you might want to be 100% natural, consumers want to remove excess chemicals from their lives and there is no reason why this can not be easily explained via the perfume marketing. Brands such as AS Apothecary clearly state their ingredients, and founder Amanda Saurin’s regular blogs even show where she’s picked and distilled her fragrance oils from. Naturals are a BIG trend in beauty and it’s going to influence fragrance too. But how are we all to know what’s in the bottle when a) most perfume communication is smoke and mirrors b) the origins of what’s in your perfume bottle are impossible to discover?

In the US there’s a growing trend to real transparency in perfume construction, brands such as Phlur give a very clear account of where everything comes from and who provides the ingredients. This week I listened to a fascinating talk by Betrand de Preville, from LMR naturals, part of International Flavours and Fragrances, a company which makes the very highest quality naturals (they supply to Chanel). He talked about the artisan rose farmers they work with in Turkey, and the exacting standards with which the blooms are picked and distilled to capture the essential aromas. These stories are SO much more interesting than the out-of-touch perfume imagery and story-line nonsense we are fed by many big brands. All the fragrance shoppers I get to meet really want to know more about what’s in the scent bottles they buy. So I am thrilled to see that Sarah McCartney is tackling this debate head on, with the launch of a new fragrance range Our Modern Lives, which tells you exactly what’s in the bottle. She’s constructed seven natural botanical fragrances and two gentle synthetics, which can be worn independently or layered together. Sarah’s one of the most interesting indie perfumers around and her interesting and high quality scents are both lovely and reasonably priced. Her Sexiest Scent On The Planet is a winner, as is the delightfully British What I Did On My Holidays. She’s pushing the debate by being both super-transparent and by creating a platform for discussion.

She’s crowdfunding the campaign here (the goal will probs be reached by the time you read this) and there’s more about the fragrances too. Sarah’s taught yoga for 21 years and her customers are increasingly asking for natural fragrances. She told me “I’d like to shed some light on the debate by being open about what we’ve put into our fragrances. That way people can make a properly informed choice, rather than just picking the option that sounds comforting, but doesn’t really give them what they need. For me, the best fragrances combine the depth and complexity of naturals with the staying power and texture of synthetics. After listening to our customers, I’ve separated them out so you can wear just the naturals, the synthetics, or both together.”

Sarah is at the forefront of a desire to know more about what’s in out beauty and fragrance bottles. Just as we all wanted to know  more about what went into our food and wine, so it is shaping up with perfume.

For more on Sarah and her 4160 Tuesdays fragrances see here.

I’m watching Jigsaw with more attention than usual because one has opened up on my doorstep in Barnes. Which is fine by me as…